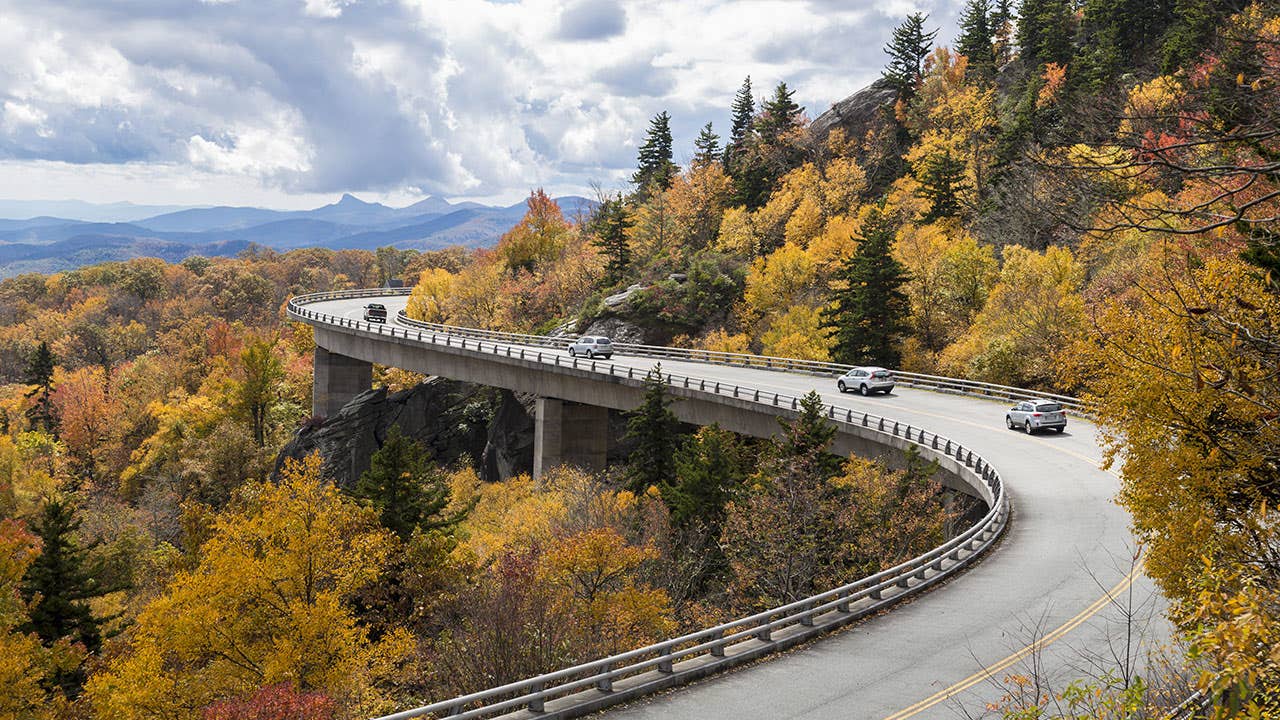 There are over 212 million licensed drivers in the United States, but the driving conditions in each state are far from equal. Data shows that some states experience more fatal accidents, traffic jams and longer commute times than others. So, which states are the best and worst for drivers today?

In the Bankrate Best States for Drivers Study, we looked at seven measures related to cost, safety and driving quality including commute time information, traffic fatality data, road condition reports and gas prices to find the best drivers by state. Read on below to see how your state fared against the rest.

Ranking the best and worst states for drivers

Regardless of where you live, it can be helpful to know where your state falls on the list of best and worst places for drivers. In the table below, we’ve ranked all 50 states based on the seven key factors mentioned above. To get these numbers, we reviewed recent data from government sources, research organizations and industry groups in our analysis. These are the best states for driving and the worst states to drive in. 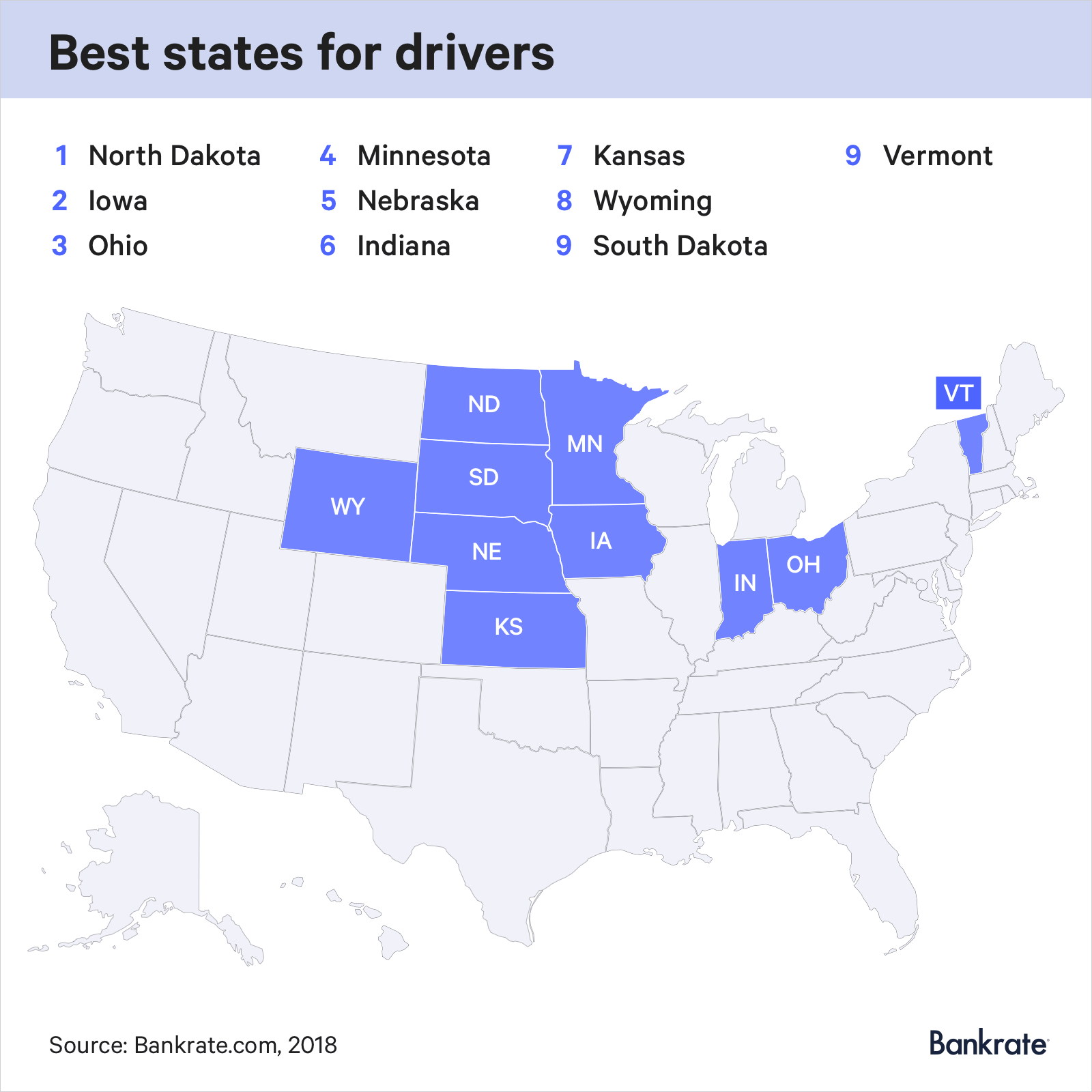 The top-ranked states for drivers

North Dakota ranked top on the list for a number of reasons. To start, the Peace Garden State is fairly safe for drivers, with a fatality rate of 1.07 deaths per 100 million vehicle miles traveled. In 2018, the state recorded 1,775 car thefts, putting North Dakota in the top 10 states with the fewest motor vehicle thefts.

The state also tends to be cheaper for drivers with lower gas prices, repair and maintenance costs. According to the Insurance Information Institute, North Dakota is the cheapest state for car insurance, with an average annual premium of $659.94. That is significantly less than the national average of $1,004.68 per year.

Michelle Halone, an accounting budget specialist at the North Dakota Department of Commerce, spends 30 to 40 minutes riding to and from her home in rural Oliver County to her office in Bismarck. While she may have to stop and wait for the occasional wildlife to cross or deal with the seasonal snowstorm, there’s not much in the way of congestion.

“I get to gear up for the day on the way to work, and on the way home I get to wind down from the day,” Halone says, “so it’s really not that bad. I get to get in the right frame of mind and see nice sunrises.”

Farther east, Brad Murchie depends on good road conditions to successfully operate his private luxury car service Noir 8. Even Fargo, North Dakota, a city of 122,000 residents, gets its rush hours as people head home from work, Murchie says, but it’s a breeze compared to Chicago where he previously lived.

“The joke around Fargo, because it’s so small is everything is 10 minutes away,” he says. “And that’s fairly accurate. You can get anywhere in 10 minutes if traffic and weather are good.”

Meanwhile, Iowa is not far behind. In our study, the second-place state came in with a total score of 40.85, putting it just 0.35 points behind North Dakota. It’s safety and cost scores were actually higher than North Dekota’s, but overall driving quality was lower, which allowed North Dakota to edge ahead.

In third place is Ohio, with a total score of 38.7. Again, while the safety and cost categories scored higher for Ohio than either the first or second place states, overall driving quality was low enough (Ohio scored 11 in this category as opposed to North Dakota’s 19 and Iowa’s 17.2) that the state took third place overall.

The worst states for drivers

In terms of the worst drivers by state, California won that honor. To that end, Goodwin and Alison Inconstanti regularly face the iconic California traffic nightmare. Inconstanti works in the touring department for a movie studio in Culver City and lives in the Tarzana neighborhood of Los Angeles. Her commute would take about 20 minutes if there was no traffic, she says. But since she lives in L.A., there’s usually traffic and getting to her job takes about an hour — maybe longer.

“It means I get up earlier,” Inconstanti says. “A lot of my nine-hour workdays are really 11 hours with the commute. … It’s just part of the cost of being in this town, which I really love being in.” 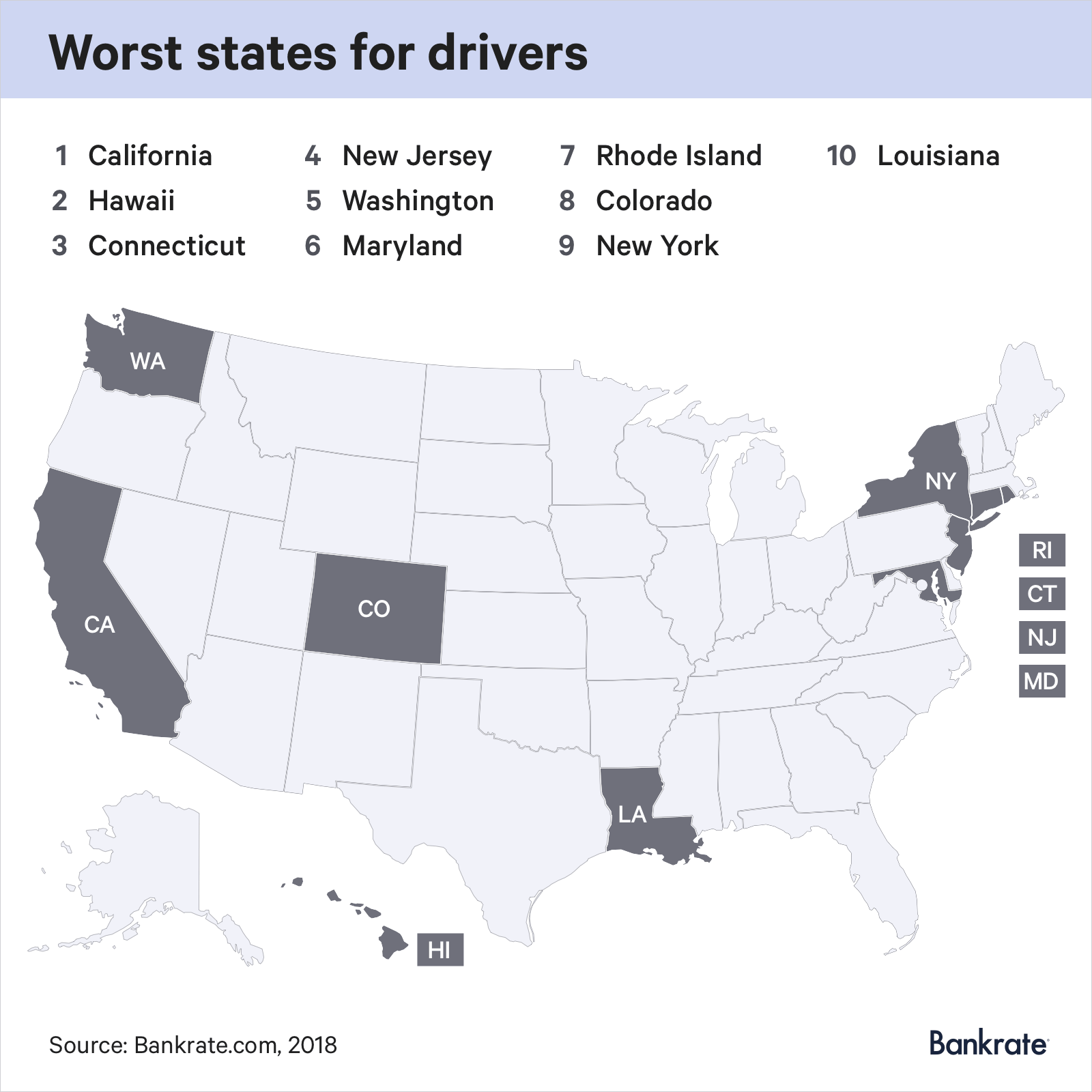 Goodwin parks in Oakland and rides public transit into San Francisco. He says he and others are facing tougher commutes than in other communities because people cannot afford to live near where they work.

It’s not just long wait times; 67 percent of roads in the Golden State are in poor condition, double the nationwide total of 22 percent, according to the transportation research nonprofit TRIP. California also has more thefts as well as higher insurance premiums, repair costs and gas prices than the national averages, according to the Bankrate study.

Aside from California, Hawaii ranked second-to-last in the study, coming in with a total score of just 11.8. While the state’s driving cost score was fairly decent at 5.1 – the same score that the study gave high-ranking North Dakota – it’s safety and overall driving quality scores were far below average.

Connecticut came in third-to-last place with a total score of 14.95. Though, notably, the state’s safety score was slightly higher than average at 6.8, it’s cost score was the second-lowest in the nation and its overall driving score was on the lower side, as well.

The cost of owning a car

People have been more apt to own their own vehicles in recent years as we’ve moved away from the Great Recession and prices at the pump became cheaper. But they sometimes forget about the cost. Cost was one of the major factors in Bankrate’s study, including the cost of owning a car.

Like it or not, owning a vehicle comes with many added costs, including the vehicle itself, car insurance, and routine repairs.

Nationwide, many drivers are paying over $1,000 per year to have car insurance. If you get into an accident, you could have to pay a deductible or cover the cost of repairs yourself. Not to mention, getting into a single accident can significantly raise your insurance premium.

Drivers who live in states with bad road conditions, like California, are at a higher risk of having to pay for maintenance, and make repairs more often. If you consistently drive on a poorly-paved road, or commute on a highway with potholes, you could deal with flat tires more frequently or even damage your suspension.

“As roads deteriorate, you’re going to have additional routine repairs,” Rocky Moretti, director of policy and research for TRIP says. “If you look at the national number, we estimate that additional cost of driving on rough roads is $599 annually — $130 billion nationally.”

Many drivers don’t think about all the extra costs that go along with automobile ownership before driving their vehicle off the sales lot, says Mark Hamrick, senior economic analyst at Bankrate.

Drivers in California, North Dakota and other states would benefit from stashing cash away in a savings account with a strong interest rate so when they get a flat tire, are involved in a fender bender or unexpectedly find themselves needing money for another reason, it’s there.

Of course, there’s also the cost of gas. According to data from the U.S. Energy Information Administration, the national average cost of gas in 2019 was $2.60 per gallon. West coast states, like California and Washington, paid the highest rates. Midwestern states, like North Dakota, Ohio and Minnesota, paid the lowest rates.

Commuters might also benefit from considering hybrid or fuel-efficient vehicles, using carpools or alternative transportation if possible, shopping around for insurance and seeing if their employer or metro offers transportation benefit programs and incentives.