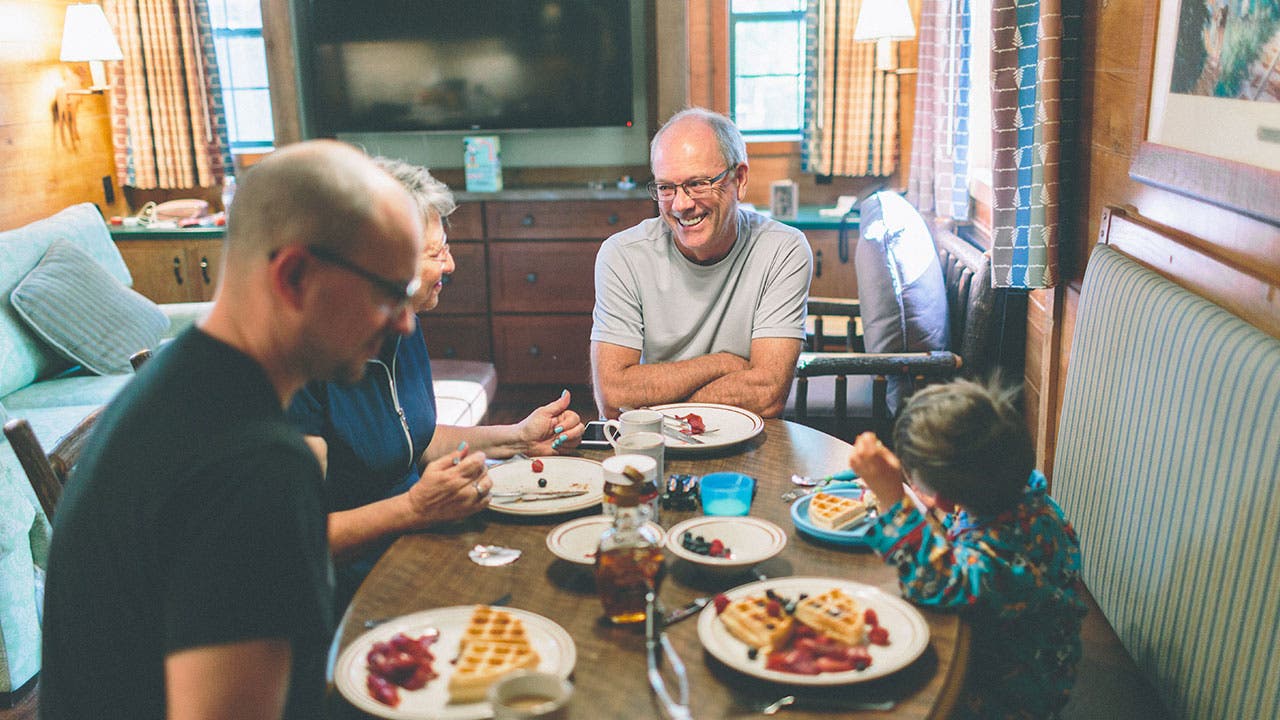 Andi Compton could use a bit more space.

Compton, 31, and her husband own a three-bedroom home in San Diego that will soon accommodate a seventh member of the family. They can’t afford a new home, which Compton estimates would cost at least $750,000 in pricey Southern California, and they aren’t yet ready to add another bedroom.

They also don’t want to give up what they have.

“We love our neighborhood and commute to our children’s school, and the fact that we can have this house paid off when we’re in our early 40s is a huge motivator to just stay put, make it work, and possibly try to renovate to four bedrooms if we can afford it,” says Compton, a stay-at-home mom.

Compton isn’t alone. A new survey by Bankrate finds that 62 percent of homeowners don’t plan on moving at all, while just 30 percent expect to leave in the next decade. 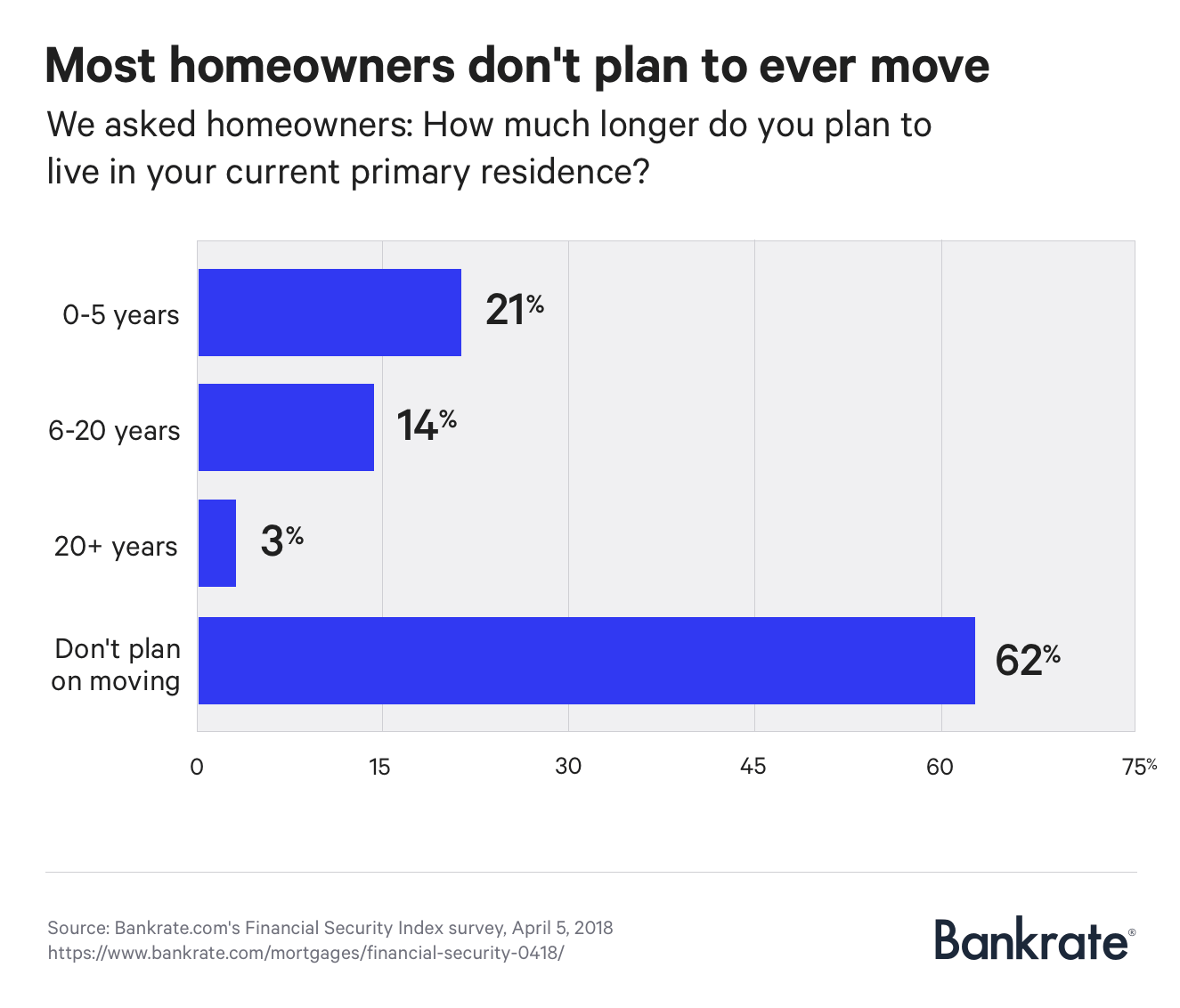 While the economy continues to grow in the aftermath of the Great Recession, and various employment metrics look positive, the lack of available homes has pushed real estate higher. That has left families with more valuable properties, but limited options to trade up.

“One of the unintended consequences of staying put in their homes is the reduced supply of homes being put on the market,” says Mark Hamrick, Bankrate senior economic analyst. “This is one of the underpinnings of rising home prices, which have outpaced growth in wages by a substantial margin.”

The state of the housing market

The most recent S&P/Case-Shiller home-price index shows that home values jumped 6.3 percent over the past year, while wages are only 2.7 percent higher than 12 months ago. The unemployment rate has dipped to a post-recession low of 4.1 percent.

The problem is that there’s just not that many available homes. Total housing inventory, according to the National Association of Realtors, is down 7.2 percent from a year ago, and existing-home sales are down 1.2 percent over the same period.

“There is no letup to rising home prices,” says NAR Chief Economist Lawrence Yun. “Even as the tightening job market is starting to boost incomes, those looking to buy are facing a double whammy of fast rising home prices and higher mortgage rates.”

Demand for real estate has even weathered a rise in borrowing costs over the past few months. A 30-year fixed-rate mortgage has jumped to 4.58 percent, according to Bankrate data, from 4.16 percent 12 months earlier.

Mike Arman doesn’t have to worry about mortgage rates.

Arman, 71, and his wife of 22 years built a house and an airplane hangar on an airstrip in Oak Hill, Florida, about an hour outside of Orlando. A pilot since 1978, Arman bought the land in 2004 and built the house in 2010, which he refers to as a cottage. He’s now getting ready to build the main house.

“We’re not moving. Period,” Arman says. “It is exactly, precisely, what we wanted because we designed it to suit ourselves.”

Arman mirrors the more than 20 percent of households in Bankrate’s survey who own their home without a mortgage, while nearly a third are paying off a loan, with a median mortgage rate of 3.95 percent.

Homeowners locked into a mortgage have a leg up on today’s borrowers. Thanks to faster economic growth, the GOP tax cut and investor fears over rising inflation, current mortgage rates (4.58 percent) are more than three-fifths of a percentage point higher than the average reported by the survey respondents. Mortgage rates are influenced by the demand for 10-year Treasuries. (Bond prices and yields are inversely related.)

Nearly 3 in 10 mortgage holders (29 percent), though, either don’t know their mortgage rate or wouldn’t say. That makes it impossible to know whether you should refinance your rate or switch from an adjustable-rate mortgage to a fixed-rate one.

“Interest rates are likely to continue to rise,” Hamrick says. “So for those who haven’t locked in with a fixed-rate mortgage, better late than never.”

Bankrate.com commissioned YouGov Plc to conduct the survey. All figures, unless otherwise stated, are from YouGov Plc. Total sample size was 2,194 adults, including 1,330 homeowners. Fieldwork was undertaken on April 5, 2018. The survey was carried out online. The figures have been weighted and are representative of all U.S. adults (aged 18+).