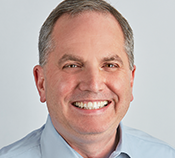 Mark Hamrick is Washington Bureau Chief and Senior Economic Analyst for Bankrate.com, operating out of the National Press Building in the shadow of The White House and U.S. Treasury. He is best known for his analysis of the economy, including the job market, and the Federal Reserve and writes about those subjects for Bankrate. You might see him asking a question at a Washington news conference, hear him discussing these topics and more on the radio, see him on television or read his name and analysis in print.

He is a national award-winning business and financial news journalist, who came to Bankrate after leading business news for Broadcast at the Associated Press in Washington for nearly 20 years.

Mark has served as president of SABEW, the leading association of business and financial journalists. He previously was president of the National Press Club.  In both capacities, he has been a vocal advocate for press freedom and for transparency.

A native of Kansas, Mark began his career in journalism as a high school student working in radio in his hometown of Coffeyville. Mark lives in Potomac, Md., with his wife Jeanne.