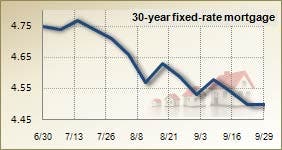 The benchmark 30-year fixed-rate mortgage was unchanged this week, at 4.5 percent, according to the Bankrate.com national survey of large lenders. A basis point is one-hundredth of 1 percentage point. The mortgages in this week’s survey had an average total of 0.36 discount and origination points. One year ago, the mortgage index was 5.25 percent; four weeks ago, it was 4.53 percent.

All of those rates tie or set record lows in the history of Bankrate’s weekly survey, going back 25 years.

Results of Bankrate.com’s Sept. 29, 2010 weekly national survey of large lenders and the effect on monthly payments for a $165,000 loan:

According to the Mortgage Bankers Association, there was a small drop in loan applications last week, even as rates fell to lows last seen in the 1950s. Four in five applications came from homeowners who wanted to refinance; the rest came from home purchasers.

When homeowners refinance their mortgages nowadays, they are borne back mercilessly into the past. Getting a mortgage today isn’t the frictionless process that it was four or five years ago. Instead, today’s mortgage dance more closely resembles the steps of the 1980s or early 1990s, before credit scoring was so ubiquitous. As in the old days, mortgage underwriting is paper-intensive now.

Mortgage loan officers seldom are complainers by nature. But they do gripe that refinancing customers can’t wrap their heads around one reality: There’s more paperwork involved in getting a loan now than when the borrowers got the purchase mortgage a few years ago.

Dick Lepre, a mortgage banker in San Francisco, says an impediment to his job is “giving me arguments about whether or not something is important — you know, ‘I don’t think I should have to send you all the pages of my tax return.’ People have to realize that their opinion doesn’t mean (squat).”

Lepre, senior loan consultant for Residential Pacific Mortgage, says well-educated borrowers are sometimes the most problematic. As an example, he cites people who work in the NASA facility in Silicon Valley, Calif.

“They’re people who can put rocket ships in orbit and land on the moon, but when it comes to discussing this stuff, the level of cluelessness is — I can only use the word astronomical,” Lepre says.

He’s exaggerating, and partly kidding. But he’s serious when he says that smart, accomplished people tend to believe the mortgage process has logic to it, and that there are always shortcuts through bureaucratic mazes. Neither is the case right now.

“They don’t understand that there’s no flexibility in this,” Lepre says. “Mortgage qualification is much tougher than it ever has been before. And please don’t pick any fights with your loan officer, arguing that you need less documentation than he or she requested, because it just leads to disasters. People simply need to get the loan application back and the income and asset documentation back as soon as possible.”

Today’s onerous paperwork requirements come from Fannie Mae and Freddie Mac. Blamed by some for the mortgage meltdown, Fannie and Freddie now scrutinize virtually every mortgage they buy. They look for underwriting errors and even minor omissions. When they find a loan with incomplete paperwork, they sometimes force the lender to buy the loan back.

That’s a money-losing proposition for the lender, akin to forcing a car dealer to buy back a brand-new car from a recent buyer — at full price — for a minor defect. The car would then have to be sold as used at a reduced price. Similarly, there’s a reduced-price market (informally called “scratch and dent”) for mortgages that had to be repurchased from Fannie and Freddie.

Lenders want to avoid selling loans at a loss on the scratch-and-dent market. That’s why they insist on getting so much paperwork. And, as Lepre says, there are no gains to be made by arguing about it.