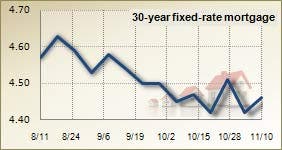 Mortgage rates bumped higher this week, as global financial markets awaited details of the Fed’s second round of quantitative easing.

The benchmark 30-year fixed-rate mortgage rose 4 basis points this week, to 4.46 percent, according to the Bankrate.com national survey of large lenders. A basis point is one-hundredth of 1 percentage point. The mortgages in this week’s survey had an average total of 0.34 discount and origination points. One year ago, the mortgage index was 5.19 percent; four weeks ago, it was 4.47 percent.

The mortgage bond market cooled off this week, as traders awaited details of the Federal Reserve’s schedule for buying $600 billion worth of Treasury bonds over the next eight months. The Fed was set to release those details on Wednesday afternoon. As the deadline approached, mortgage bond yields went up and rates followed.

This rise in rates should be temporary, says Jim Sahnger, mortgage consultant for Palm Beach Financial Network, in Stuart, Fla. “I don’t know how long it’s going to take to recover, but I wouldn’t freak out just yet,” he says.

Sahnger bases this judgment on technical reasons — the waiting-for-the-Fed factor — as well as on what’s happening to real estate. Not many people are buying houses, and there’s a shrinking pool of homeowners who are able to refinance. That means fewer people will get mortgages in coming months.

“You will have lenders who become more competitive in their pricing, to the extent that they can,” Sahnger says.

If Sahnger is right, mortgage companies might be going through their last hurrah for a while. Home loan applications were up last week, according to the Mortgage Bankers Association. Michael Fratantoni, the association’s vice president of research and economics, says recent increases in purchase applications “align with the better-than-expected news from October’s employment report and other data, indicating some improvement in the economy’s growth prospects. Refinance applications increased as rates continued to hover near record lows.”

The increase in applications has left Michael Becker busy, even busier than he was during the great refi boom of 2003. Becker, a mortgage banker for Happy Mortgage, in Lutherville, Md., says, “I think part of it is so many people have fled the industry.” He’s competing with fewer loan officers.

And he’s competing with megabanks. The top three lenders — Wells Fargo, Bank of America and Chase — originated more than 53 percent of mortgages in the second quarter of this year, according to MortgageStats.com. Becker says he can almost always beat their rates. He wishes their customers would do more comparison shopping.