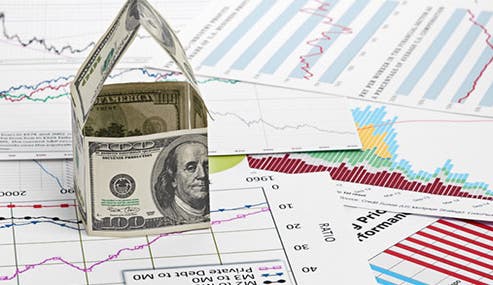 Both homebuyers and refinancers are looking at ARMs. For those who missed the boat and didn’t refinance when mortgage rates were at bottom, an ARM loan may be the only remaining option to save money with a refinance. But ARMs aren’t for everyone, and borrowers must weigh the risks against the rewards before switching from a fixed rate into an adjustable-rate mortgage.

The types of ARM loans borrowers get today aren’t nearly as risky as those offered during the housing boom, when nearly 2 in 5 borrowers opted for adjustable-rate loans. Often, an ARM at the time had a fixed rate for a short period, and then the mortgage payments quickly became unaffordable.

Most borrowers considering an adjustable-rate loan now want the rate to be fixed for at least five to seven years, says Brett Sinnott, director of secondary marketing at CMG Mortgage Group in San Ramon, Calif.

About 7 percent of mortgage applicants in July opted for an adjustable-rate mortgage, according to the latest Freddie Mac monthly survey. The share of ARM applicants has nearly doubled since April from 4 percent.

Should you use an ARM to buy or refinance?

Typically, a modern-day ARM allows the borrower to pay off the loan over 30 years, but the initial rate is fixed for only the first few years. For instance, in the case of a 5/1 ARM, the interest rate will reset annually after five years. A 7/1 ARM has an initial rate that lasts for seven years, and then the rate is adjusted annually. Some borrowers also opt for 10/1 ARMs.

When deciding whether you should get an adjustable-rate loan, consider how long you plan to keep the house you are buying or refinancing, says Michael Highfield, associate professor of finance and head of Mississippi State University’s Department of Finance and Economics.

“If I’m only expecting to live in my house for five years and I can get an adjustable-rate mortgage that is going to be fixed for five years, go ahead and take advantage of that,” he says. “Take the lower rate and enjoy it.”

That’s exactly what Highfield did when he got his first home in 2002, when the 30-year fixed ranged between 6 percent and 7 percent.

“My very first mortgage was an adjustable-rate mortgage,” he says. “I knew I was not going to be in the home for more than seven years, because of my job and where I was in my life cycle.”

Today, with the rate on the 30-year fixed mortgage still below 5 percent and knowing he will keep his next home for the long term, Highfield says he is shopping for a home with a fixed-rate mortgage.

An adjustable-rate loan can be risky if you plan to keep the home beyond the expiration of the fixed-rate period, he says. You may get stuck with significantly higher mortgage payments if you still own the home when the rate resets and for some reason you can’t refinance.

ARMs are tempting for homeowners with bigger loans

The savings offered by the lower rates of adjustable-rate mortgages are tempting for some borrowers. The national average for the 30-year fixed-rate mortgage is about 1 percentage point higher than the average for the 5/1 ARM, according to the latest Bankrate weekly survey.

“Up to $625,000, most of my clients don’t want the uncertainty of the adjustable,” he says. “But on jumbo loans I’m finding more people switching to ARMs.”

If you decide an ARM is the best option for you, make sure you understand the terms of the loan you are getting and whether you would be able to afford the payments in the worst-case scenario, if rates rise.

An ARM can be a good option for homeowners who are more tolerant of risk and prefer to pocket the savings offered by the lower rate of ARMs and use it in other investments, Carson says.

“But if you are somebody who is going to be getting up every morning and look at what the index is doing, you should probably keep that 30-year fixed. It’s a small price for your peace of mind,” he says.