Adjustable-rate mortgages often have lower interest rates than their fixed-rate counterparts, at least initially. Why are they overlooked?

It could have much to do with the home loans receiving a bad rap during the housing meltdown, so borrowers are likely still dodging them, says Dave Jacobin, president of 1st Mariner Mortgage in Baltimore. 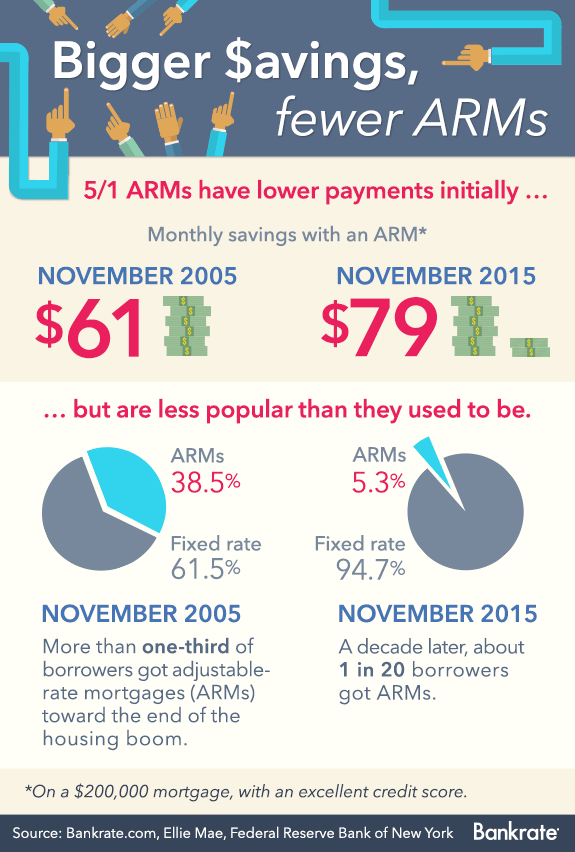 “There were all kinds of crazy adjustable-rate mortgage offerings out there,” Jacobin says. Some of the loans were 10-year ARMs, which adjust annually after the first 10 years. Other loans adjusted after just the 1st or 2nd year.

The guidelines for ARMs during the bubble “allowed a lot of people to get into loans that probably shouldn’t have been in those loans and really didn’t have a chance for success from the get-go,” Jacobin says.

Another adjustable product offered pre-crisis was the payment option ARM, or “pick-a-pay” loan, in which borrowers had a large or small monthly payment of their choosing such as:

Borrowers who chose to pay just the minimum found themselves experiencing negative amortization, which is when the amount owed increases — even after the borrower makes a payment.

“Everybody banked on the fact that housing values were going to continue to increase, but we all know that that wasn’t the case,” Jacobin says. “When housing values are decreasing at a rapid pace and your balance on your mortgage that you owe is increasing, that’s a recipe for disaster — and that’s what happened.”

In 2005, ARMs commanded 38.5% of the mortgage market, according to an analysis by the Federal Reserve Bank of New York. A decade later, Ellie Mae reports that ARMs account for only 5.3% of all mortgages originated during September 2015.

Uncertainty over the interest rate environment could also be contributing to borrowers’ aversion to ARMs. More people see increasing risk in the marketplace and are choosing to stay away from ARMs as a result, according to a RealtyTrac report.

When will ARMs make a comeback?

“If affordability goes down, people flock to adjustables in order to be able to afford more,” says Michael Moskowitz, founder and president of Equity Now in New York.

Compare 5/1 ARM offers in your area.

The vast majority of adjustable-rate mortgages are sold to homebuyers who are suited for them, Jacobin says. He uses the following scenario as an example: If the 30-year fixed rate reaches 6% but a 10-year ARM hovers around 5.375%, people may start turning their attention to adjustables.

Principal and interest: Fixed-rate vs. ARM

Borrowers who have a flat base salary but get a large bonus at the end of every year may also benefit from an adjustable-rate loan, he explains.

ARMs are suitable for buyers who have planned out their lives, adds Moskowitz.

If you’re considering an adjustable-rate mortgage, be sure you’re fully aware of all the moving parts of this loan type, Jacobin advises. That includes understanding the index to which the loan is tied, the periodic rate cap and the lifetime rate cap.

“Be sure that if you’re going to be in that property when those adjustments hit, that you are able to make the monthly payments without putting too much of a (strain) on the rest of your financial picture,” he says.

Is your credit mortgage-ready? Get your free credit score at myBankrate.