Rates plunge to another new low 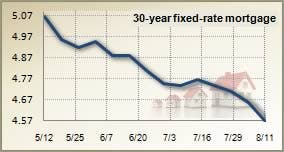 Mortgage rates once again plunged to the lowest levels in decades, but there was no surge in refinance applications.

The benchmark 30-year fixed-rate mortgage fell 9 basis points this week, to 4.57 percent, according to the Bankrate.com national survey of large lenders. A basis point is one-hundredth of 1 percentage point. The mortgages in this week’s survey had an average total of 0.48 discount and origination points. One year ago, the mortgage index was 5.67 percent; four weeks ago, it was 4.77 percent.

Mortgage rates haven’t been this low in about 55 years. Rates on FHA-insured mortgages averaged 4.56 percent in February 1955, according to the National Bureau of Economic Research. Conventional mortgage rates probably were similar.

“I think you have a combination of people who have self-selected,” says Christopher Cruise, a longtime loan officer who now trains brokers for LoanOfficerSchool.com. “They believe that they can’t refinance. They’ve been hearing these stories that even people with high credit scores and great employment and great equity are not being able to refinance.”

So they don’t call and, Cruise says sardonically, “we don’t get the chance to say no to a lot of people.”

The office of Freddie Mac’s chief economist, Frank Nothaft, issued a note this week titled “Where Have All the Originations Gone?” It gave a number of answers:

Get out of Dodge!

Industry analyst Paul Descloux, publisher of the Mortgage Maxx application index, acknowledges that there are a lot of people who want to refi but can’t. As he phrases it: “The tail of those wanting to change their mortgage situation remains fat indeed.” Descloux has a suggestion for improving the lot of some homeowners who can’t refi: Change the rules that restrict withdrawals from 401(k)s.

“But for those able, for a specified time allow those with retirement plans to withdraw without penalty some funds to pay down their mortgage,” Descloux writes in this week’s newsletter. He explains that encouraging people to reduce their 6 or 7 percent mortgage debt “is a quantifiable winner” if their alternative is investing in low-rate CDs or low-yield bonds.

On the other hand, maybe some people are merely waiting for the employment picture to improve so they can move. That’s what Cruise wonders about. Americans are mobile, and a lot of people have been living in their homes five or six or seven years and are itching to move, he says.

“Rather than thinking about refinancing, I think we’re thinking about moving,” Cruise says. “We don’t want to refinance. We want to get the hell out of here and go somewhere else.”