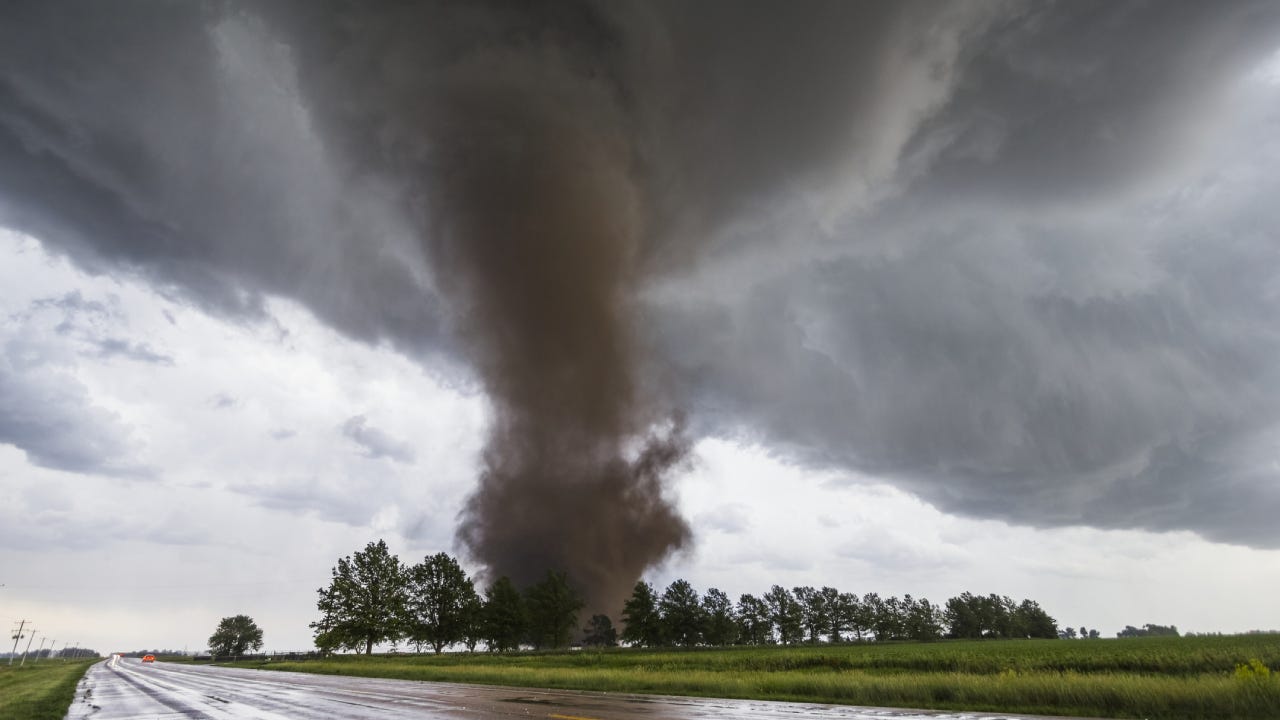 There were 1,075 tornadoes reported in the U.S. in 2020, according to the Insurance Information Institute (Triple-I). Mississippi, Texas, Alabama, Georgia and Illinois topped the list as the top five worst states for tornadoes. These states recorded the most tornadic activity in 2020, ranging from 127 in Mississippi to 71 in Illinois, as confirmed by the National Weather Service.

Where do tornadoes occur? These destructive and deadly storms can happen anywhere in the U.S. but are most often concentrated in the Midwest and Deep South. The central part of the country has rightfully earned the nickname “Tornado Alley” due to its high risk of twisters, but tornadic activity is also common throughout the Gulf Coast and Southeast U.S. regions. Because these storms can cause catastrophic damage to your home and vehicles, understanding your risk and having adequate property and auto insurance coverage can help you prepare.

The top 10 worst states for tornadoes

Of the top 10 states with the most tornadoes in 2020, only one — Texas — is officially a part of Tornado Alley. As experienced in 2020, tornadic storms can develop and cause destruction just about anywhere in the U.S., not just in a specific region of the country. Understanding your state’s tornado risk could help you prepare yourself, your family, your home and your vehicles for potential damage. So what state has the most tornadoes?

The states with the fewest tornadoes

While tornadoes occur in all 50 states and Washington, D.C., there are several states that typically experience minimal tornadic activity. These 10 states saw the fewest twisters in 2020:

While these states record relatively few tornadoes on average, each season is different. As the 2020 season illustrated, even states that aren’t considered to be high-risk for tornadoes can experience dangerous convective storms that spawn tornadoes and cause widespread property damage.

Which states are in Tornado Alley?

Tornado Alley is a nickname given to a region in the U.S. where tornadoes are common. Tornado Alley begins in the Southern plains and extends northward through the upper Midwest to the Canadian border.

According to the National Severe Storms Laboratory (NSSL), Tornado Alley states include:

Tornadoes can and do occur outside of these states. Additionally, Tornado Alley is simply a nickname. Some states, like Alabama and Mississippi, are not included in Tornado Alley but often see widespread tornadic activity.

Most standard homeowners insurance policies cover tornado damage for the structure of your home, outbuildings and your personal belongings. Your policy will also likely cover damage from fallen trees that are blown onto your home during a storm.

As a result, you may not need to purchase a separate policy for tornado insurance coverage. However, every policy varies in its coverage, so reviewing your policy with your insurance professional for these protections can be a good idea. Your home insurance policy might not offer enough coverage if you live in one of the worst states for tornadoes. Additionally, every property carrier is different, so tornado damage could be excluded from your policy. In that case, you may need to seek out a separate policy to cover tornado damage.

In addition to heavy winds, the intense convective storms that spawn tornadoes often cause floods. Unlike tornado and wind damage, flood damage is not typically covered by homeowners insurance. In order to be protected by flood insurance, you will likely need to purchase a separate flood policy underwritten by the National Flood Insurance Program (NFIP). Flood coverage is also available through dozens of private insurers and many property insurers offer flood coverage as an endorsement on standard home policies.

Prepping your home for tornadoes

In addition to making sure your home insurance covers you in the event of a tornado, there are some things you can do before and after a storm to mitigate your risk to minimize damage. These tips can help you prepare for a natural disaster by physically safeguarding your home and belongings. If you live in an area where tornadoes are common, you may want to:

These preparations and safeguards can make an enormous difference should a disaster strike. If the worst does happen, having pictures of valuable belongings and the inside and outside of your home can be helpful if you need to file a property insurance claim. Preparing a detailed home inventory of your belongings could also be beneficial and should be stored in the cloud or on a flash drive for quick access after a storm.

Does tornado insurance cover my car?

Comprehensive coverage, offered by your auto insurance carrier, includes coverage to repair or replace your vehicle if it’s damaged from a tornado’s winds or rain. Homeowners insurance policies do not cover your car, even if your vehicle is parked in your garage or driveway when it is damaged. According to the Triple-I, about 80% of U.S. drivers carry this optional coverage which costs about $150 a year on average.

The best homeowners insurance company will vary depending on your individual needs and rating factors. Shopping around and comparing home insurance quotes from multiple carriers before purchasing a policy might help you find the right fit for your situation. A licensed insurance professional can help you through the process of obtaining quotes and securing coverage.

How much home insurance do I need?

Experts typically recommend that homeowners purchase enough home insurance to cover the entire dwelling (the actual structure of your home) if a tornado or other covered peril destroys it. You may also want to consider personal property coverage. Other coverage types that could be helpful include other structures coverage, medical payments coverage and water backup coverage. A licensed insurance professional can help you choose coverage for your specific needs.

Many home insurance companies will cover additional living expenses while you rebuild or repair your home after a tornado or other covered loss, but policies vary from provider to provider. Check your existing policy or talk to your agent to see if you have this coverage, which is often called loss of use.

Read more From Cate
Cate Deventer is a writer, editor and insurance professional with over a decade of experience in the insurance industry as a licensed insurance agent.
Edited by
Amy Sims
Managing Editor
Reviewed by
Mark Friedlander
Director of corporate communications, Insurance Information Institute