10 secrets for cheap travel from a world-record globetrotter 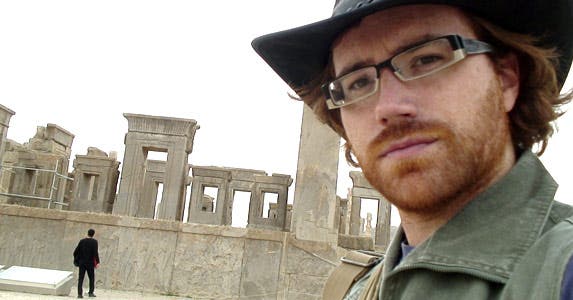 Editor’s note: Filmmaker and world-record traveler Graham Hughes lives on an island in Panama that he has dubbed “Jinja Island”; it was his prize in an online “Survivor”-style competition. The Liverpool, England, native holds two Guinness travel records, including the first and fastest journey to every country in the world (taking four years and 31 days) by “scheduled ground transport.” That means no planes. How did he do it? Economically! Here are his best tips for world travel on the cheap.

Steering clear of pricey destinations sounds like a no-brainer. We all know that travel in Japan, Norway and Australia costs a fortune, but did you know the most expensive city in Africa is in Angola? Senegal and Ethiopia are not exactly bargains either.

Before you go, check online for prices of hostels, and look up restaurants to see how much they’re charging for their least expensive dish. As a general rule, Southeast Asia and Latin America are cheap and cheerful, but even there you’ll find big differences in costs from one country to the next. Vietnam, Bolivia and Nicaragua always seem to give good value. 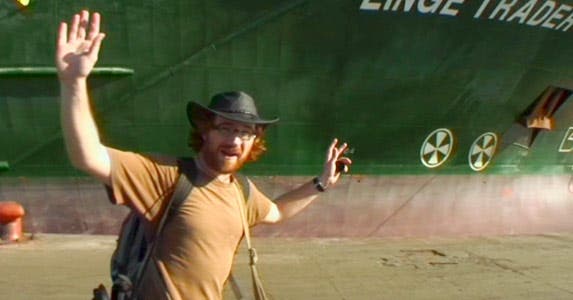 A common mistake a lot of first-time adventure travelers make is to take a massive backpack filled with everything they might need. When I travel I take nothing I might need, just what I know I need: my passport, a credit card, a camera, some clothes, a tiny sleeping bag, a simple first-aid kit and my laptop.

If you can live without it, don’t take it — it’s just more things to possibly lose. I don’t even take a towel. (I just ask to use one wherever I’m staying, or else I use the bedsheet!)

Resist the temptation to take a “spare” anything. If you lose something or it breaks, buy another one. (You’re insured, right? We’ll get to that in a moment.)

Traveling with loads of stuff not only makes it unnecessarily difficult to get around, it also restricts your travel options and makes things more expensive. Excess baggage charges are never what I would call reasonable.

Packing light means you can keep your bag with you at all times — which is important on overnight buses. 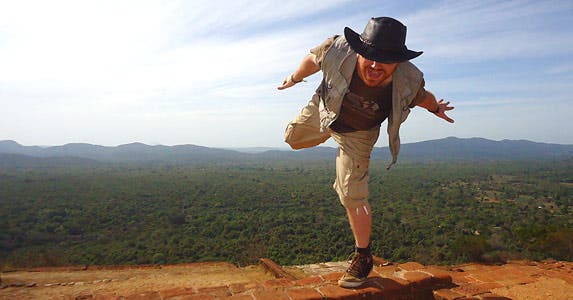 Going anywhere without insurance is a gamble — and it’s a risk that’s just not worth it. If you get really ill in a foreign country or are involved in a traffic accident, you could face hospital bills in the tens of thousands of dollars.

If you’re spending a “gap year” on the road, you don’t want to be paying it off for the rest of your life. Make sure to take along some travel insurance. Don’t forget to check your credit card for any free coverage it might offer.

Even if you have travel insurance, getting sick can be a costly affair (and can ruin your holiday). So try not to drink the local water, be sure to take your anti-malaria pills and make sure that any food you eat is thoroughly cooked. 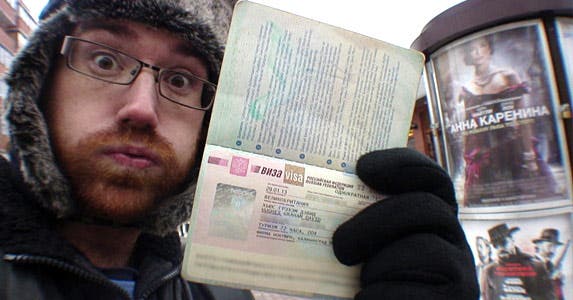 Be informed. Use a guidebook. Read the latest information on the Internet.

It’s important to be privy to the most up-to-date information, or you could wind up spending a lot more than you should. When it comes to changing money, make sure you know how much a taxi should cost and choose the hostels that offer the best value for money.

Forewarned is forearmed. I sometimes meet backpackers who like to “dive in and see what happens,” but I wouldn’t recommend it.

Before I go anywhere, I ensure I’ve read up about visa requirements, what vaccinations I might need, cultural differences to be respected and country-specific scams to be avoided. Fall victim to a scam — and some of them can be incredibly elaborate — and you can kiss your shoestring budget goodbye. 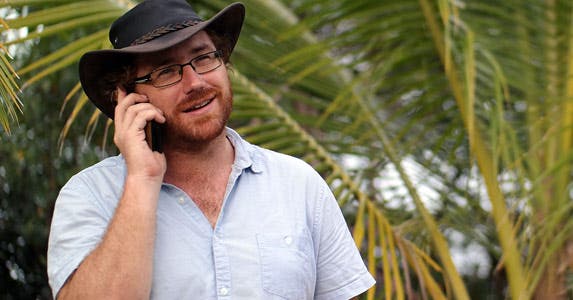 If you desperately need to call a phone number back home, the cheapest way to do it is to turn on your mobile data and to use an online calling service such as SkypeOut.

It goes without saying, but never go abroad and leave your home SIM in your phone. Even if you try your level best not to make any calls, the bill when you get back will invariably be outrageous. 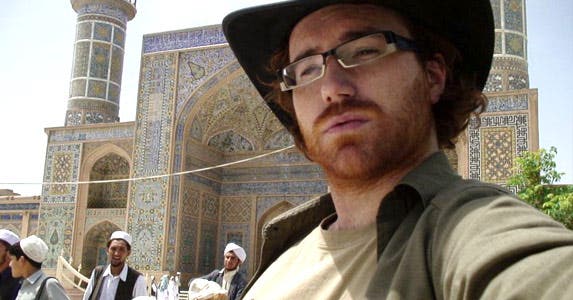 Actively seek out the free stuff

London is an incredibly expensive city. However, many of its museums are free. In India, the Taj Mahal is free on Friday afternoon for prayers (but don’t run around snapping pictures). The High Line in New York, the City Circle tram in Melbourne, Australia, the Hong Kong zoo — none of these things will cost you a dime either.

A bit of urban exploration or a self-guided walking tour of a city is a great way to spend an afternoon. Want an amazing view of the metropolis? Take the elevator up to the top floor of a tall hotel. Feeling peckish? Maybe you can scoff some free samples in a supermarket. Find out if there are going to be any free concerts or street festivals that week.

Even so, there are always going to be things that you want to do or see that you have to pay for. So, if you’re a student, apply for an ISIC, or International Student Identity Card. It can save you a third or more on flights, as well as attractions. A similar card for teachers is called an ITIC. 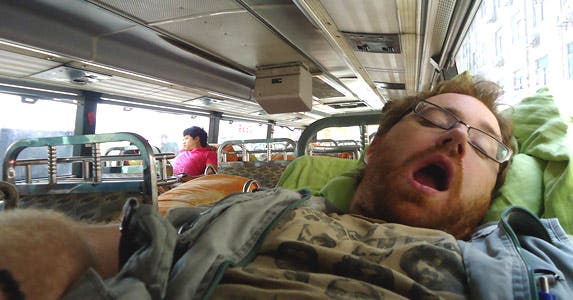 When looking for flights, try to book out of season, buy your tickets early and go for smaller carriers, such as easyJet and Ryanair in Europe or China Eastern in Asia.

Google Flights is a great place to look for bargains, and STA Travel’s website usually has good offers, even if you’re not a student.

Bus services, such as Megabus, are “no frills,” but if you book early enough, they’re cheap as chips.

Hitchhiking is a great way to cover vast distances for nothing at all — but always put safety first. I would recommend thumbing rides in pairs and texting the license plate to a friend before you get in.

When renting a car, book the smallest and least expensive model. The rental service will often give you a free upgrade when you arrive.

Avoid expensive restaurants. Street food is the way to go! Alternatively, stock up at the supermarket and cook at your hostel.

If you’re in a pinch, swallow your pride and go to McDonald’s, KFC or Subway — nobody has to know.

As far as drinking is concerned, the worst thing you can do to your wallet is to go to a swanky bar and drink expensive imported beer. Talk to the locals; they’ll introduce you to the cheapest national beverage and the best places to drink it.

If you get invited to a house party, you’re all set — you can buy your booze much cheaper at a supermarket, and there will be no entry fee. 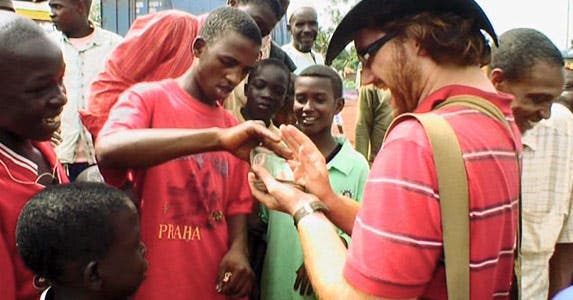 As a tourist, more often than not, you are going to get charged more than a local for most goods and services, so don’t be embarrassed to haggle. In places like Egypt and India, it is almost rude not to!

In countries that have no meters on the taxis, remember to negotiate the price before you set off, because once you arrive at your destination they’ll have you over a barrel.

Keep your wits about you. You’ve probably heard this a bajillion times, but if something seems too good to be true, it generally is. A super cheap tour of the pyramids will invariably culminate in a high-pressure “tour” of a perfume/carpet/trinket shop. A “free” ride on a camel won’t be free when you want to get off the damn thing.

After a while, haggling becomes fun, but don’t get carried away. Once you start quibbling over pennies, you make all us backpackers look bad. 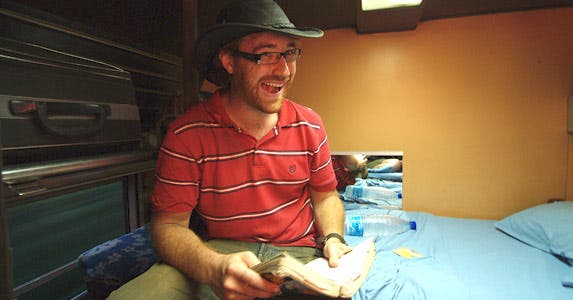 CouchSurfing.com is the worst-kept secret in budget travel. It is a network of men and women from all over the world who are happy to let happy vagabonds stay a night (or several) for free.

CouchSurfing.com is a good way of ensuring that somebody is expecting you in each new destination — somebody who can raise the alarm if you don’t turn up. It’s also a great way to gain that all-important local knowledge — and make awesome new friends!

If you can’t find a host, you might want to consider renting a room via a service such as Airbnb. Or else find a sun lounger on the beach and sleep out under the stars.