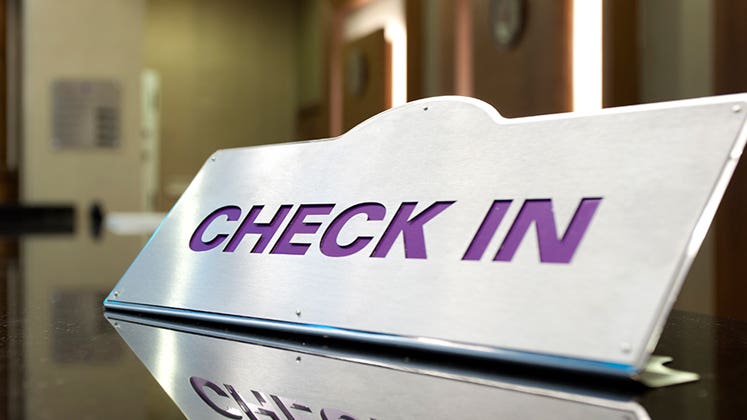 Why pay too much for a hotel?

The idea that some people would spend hundreds of dollars per night on a hotel room has always seemed crazy to me.

Oh sure, there are times when you want to splurge. A stay at a Walt Disney World theme hotel or a luxury resort on the beach in Cancun, Mexico, might enhance your vacation experience. But why would you blow a lot of money on a run-of-the-mill chain hotel for a work trip or big-city sightseeing excursion?

The absurdity of shelling out loads of cash on hotels really hit me once I started scoring fantastic online deals on rooms.

My proudest moments as a tightwad traveler have included paying less than $100 per night (twice!) to stay at a name-brand, four-star hotel a few blocks south of New York’s Central Park, and landing a ridiculously low nightly rate of $40 for a four-star in the upscale Miami suburb of Coral Gables.

How? The internet has given consumers many ways to avoid paying full price for hotels, including one method that has helped me score king-size bargains. Follow along and I’ll show you. 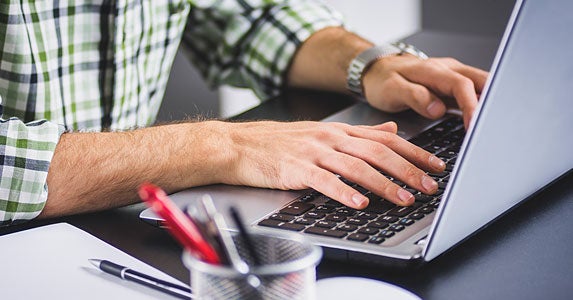 When I’m planning a trip, my hotel strategies include:

How I’ve found the biggest bargains

My favorite technique, the one that has resulted in some truly rock-bottom prices, is to name my own price using Priceline.

But you have to know what you’re doing.

“You can save up to 40%, but you can also lose the entire vacation if your plans change,” warns Christopher Elliott, author of “How to Be the World’s Smartest Traveler.”

Taking the mystery out of Priceline 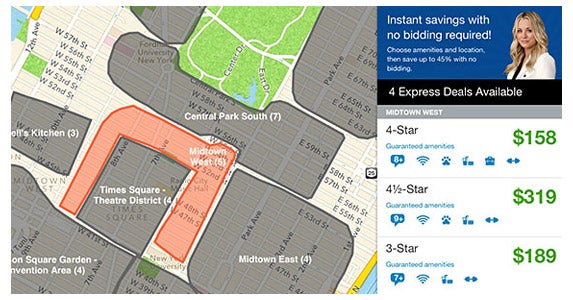 If you go with option three and your price is accepted, you pay on the spot and must live with what you get. There are no refunds.

So how do you know what to bid?

Bidding info sites can be your best friend

You don’t have to be completely in the dark because on sites such as BetterBidding and BiddingForTravel, other Priceline users tell what they paid and the hotels they scored. The sites also provide bidding tips.

“The best advice is to start off with a shorter hotel stay,” says Steve Nassau, the founder of BetterBidding. “A one-night stay before an early morning flight, after a late-night arrival or for an impromptu weekend away is a perfect opportunity to give it a try.”

Let me take you step by step as I use Priceline for a trip of my own.

I was preparing to travel to Fairfield, Connecticut, for my nephew Simon’s high school graduation.

I pulled up Priceline, clicked to name my price and entered my destination and dates. The site responded with a map and list of four zones in southwestern Connecticut, including “Westport-Fairfield.”

I then individually clicked on the boxes for the zones to see the categories of hotels available in each. (See illustration.) I learned that Westport-Fairfield and the Greenwich zone have four-star hotels and lower, while Priceline’s Norwalk and Stamford zones have three-and-a-half-star hotels and lower.

How to use free rebids

That’s all valuable information for what are known as “free rebids.” If Priceline rejects your offer, you must change it — by adding another zone, adding a lower star level or altering your dates — before you can bid higher right away. 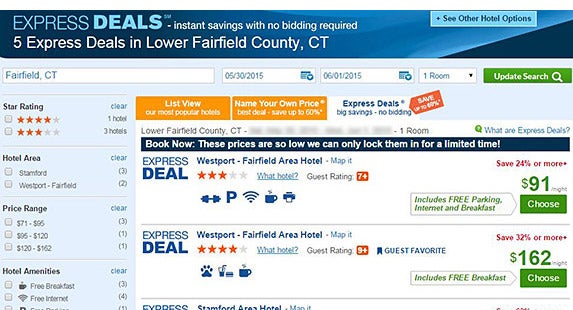 Next, I went back to the Priceline home page and searched for the “Priceline Express Deals” available for my two-night stay. Checking these opaque offers gave me an idea of what might be available for even less if I named my price.

I saw a four-star hotel in Westport-Fairfield that welcomes pets, has a restaurant and provides free breakfast, plus it’s a “Guest Favorite.” It’s $162 per night. There was also a three-star for $91 that had a fitness center, free parking, free internet and free breakfast. With those amenities, the three-star sounded like a better bargain.

Gather as much intelligence as you can

I opened another tab and went to BetterBidding. The site’s Priceline hotel list for Connecticut named a couple of three-and-a-half-star and three-star hotels that users have reported in the Fairfield area, but no four-stars.

Meanwhile, BetterBidding’s “Priceline – Connecticut” page didn’t show any recent winning bids where I was going. It was the same on BiddingForTravel. I’d probably have found more winning-bid reports if I had been traveling to a popular destination like New York City.

Even so, I think I’m ready to start bidding.

Start low. What have you got to lose? 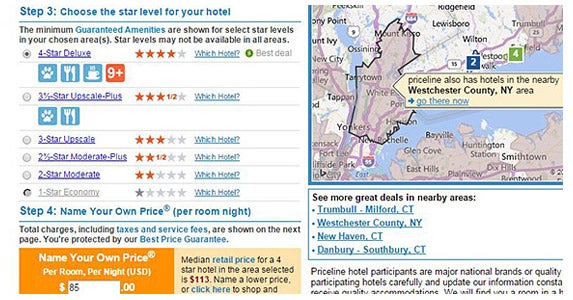 Because I love a good bargain, I started with a very lowball bid for a four-star hotel in the Fairfield area. I returned to the Priceline page with the map and list of zones in southwestern Connecticut, and I entered “$75” in the “Name Your Own Price” box.

I was taken to a page previewing my offer, and I saw that Priceline would add $32.30 in taxes and service fees, and that the hotel would add another $15 per day. That was explained as a “resort fee” — but my guess was it was probably an energy surcharge. My total was $212.30 for two nights.

A four-star hotel is looking like less of a bargain, particularly if parking and internet cost extra.

But I completed my bid. And my cheapskate offer was rejected.

I decided to try again for a four-star in Fairfield, adding the Stamford zone as a free rebid and raising my offer to $80. But still no luck.

I was reluctant to go higher for a four-star hotel, given the fees and possible lack of amenities. So, I decided to try for a lower star level.

If at first you don’t succeed … 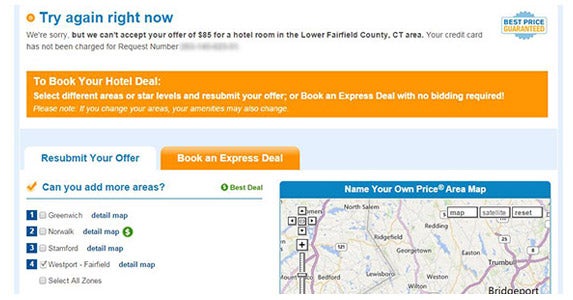 If I really had my heart set on scoring a four-star hotel for no more than $80 in my desired area, I could have tried my luck with the very same bids — without changing the dates or adding more zones or star levels — after waiting at least two hours.

Instead, I aimed for a three-and-a-half-star hotel. The Priceline rejection message that was still on my screen invited me to make another change and try again, but it wouldn’t let me uncheck the Stamford zone. So, I went back to the home page and start the name-your-price process over, choosing only Westport-Fairfield and selecting my new star level.

When there are no free rebids

Since all four Priceline zones in the region offered three-and-a-half-star hotels, I wouldn’t have any free rebids and would have to bid carefully.

I decided to shoot for $85. The bid-preview screen showed that three-and-a-half-star hotels in this area didn’t charge the annoying “resort fee.” My total, with taxes and Priceline’s service fee, was $206.16.

I clicked to enter my bid — and it was rejected. So, I lowered my sights to a three-star hotel. 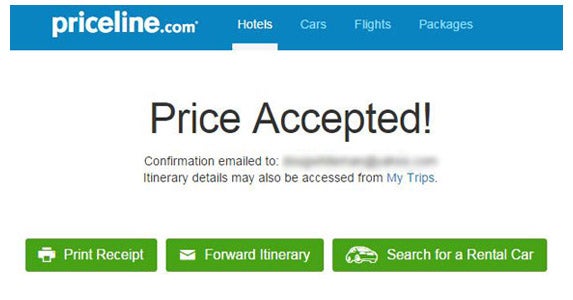 At this point, I remembered the Priceline Express Deal for a three-star hotel in the Fairfield area for $91. I wanted to beat that.

My total for the stay, including taxes and fees, was $182.30. That’s about $40 less than my final cost would have been for the express deal. I went to the website of my winning hotel and saw that my $75 rate was 38% below the lowest advertised rate of $121.49 for my two nights.

Is this for you?

I’ll was alone on that trip and wasn’t too picky, as long as the hotel met three-star standards. I wasn’t sure what kind of bed I’d get. If you bid with Priceline and absolutely must have a king bed or two queen-size, you have to call the hotel and hope it can accommodate you.

Bottom line: I recognized this deal may not be for everyone.

“Make sure you know what you’re getting yourself into,” says Elliott, the travel author and consumer advocate. “Nonrefundable means nonrefundable.”