Cardholders paid off most recession debt 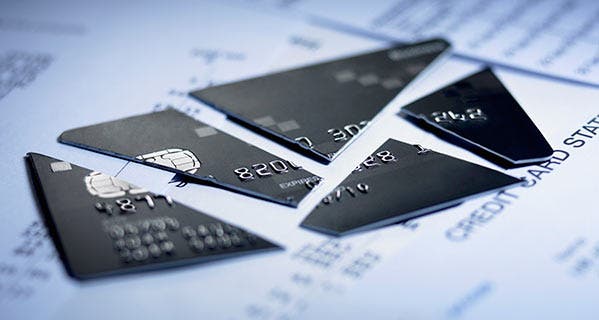 Conventional wisdom holds that the big decline in credit card debt during the Great Recession can be attributed largely to the card companies writing off uncollectable accounts. But new research from the Federal Reserve Bank of Philadelphia suggests cardholders should get the bulk of the credit.

Total outstanding revolving debt, made up mostly of credit card debt, peaked at $1.02 trillion in July 2008 before falling by 18% over the next nearly 3 years, according to Federal Reserve data.

How much of that can be credited to borrowers shoring up their finances by paying down debt as the recession dragged on? In 2010, the New York Times wrote that “analysts say that a significant portion of the decline is actually the result of financial institutions writing off billions of dollars in credit card debt as losses.”

It turns out people paid

But the study by Larry Santucci, a senior industrial specialist with the Philadelphia Fed, concluded charge-offs — banks writing off bad debts — “played a much smaller role in balance reduction than did paydown.”

Some 75% of the card balances that existed at the peak were gone within 4 years, according to Santucci, most of that achieved when consumers paid off their debts.

“Here, I observe people paying down their credit card debt during a time when the economy was still recovering and unemployment was still high,” Santucci says in an emailed response to questions.  “Yes, charge-offs played a significant role in the overall picture of credit card deleveraging, but many consumers who built up revolving credit card balances during the financial crisis, housing crisis, and Great Recession actively worked to preserve their credit availability in the event that they’d need to access it in the future.”

Just because consumers paid off a large chunk of the debt doesn’t mean charge-offs weren’t high during and just after the recession. The Fed paper found the 27.8% of the balances were charged off, while 72.2% were paid down.

“As expected, the share of debt reduction attributable to charge-off was increasing in risk,” Santucci says. “Lower risk account holders were much more likely to pay down their debt rather than default.”