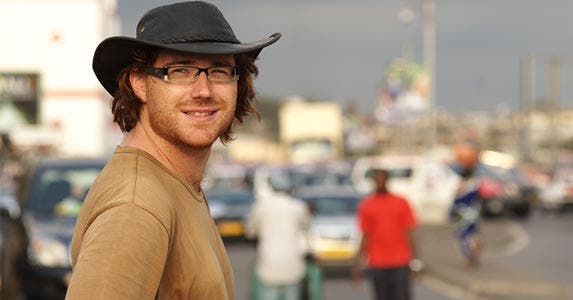 Be smart and safe when traveling abroad

Hi I’m Graham Hughes, the first and fastest person to visit every country without flying. (Check my entry in Guinness World Records if you don’t believe me.) My journey took over 4 years and encompassed well over 200 countries and territories, including Afghanistan, Honduras, the Democratic Republic of Congo and Somalia.

What many people find remarkable (myself included) is that throughout this adventure, I was never robbed, I was never mugged, I didn’t get beaten up, and I didn’t even get ill. To be perfectly frank, my biggest headaches (financial and otherwise) were caused by taxi drivers, my bank and law enforcement officers.

Now either I’m some sort of red-haired good-luck bunny, or the world is not as dangerous as you might think. I was reasonably cautious, but not obsessively so. Here are some tips and pointers for staying safe that I picked up along the way.

Before you leave home, do your homework.

I meet a lot of travelers who pride themselves on turning up somewhere knowing next to nothing about the place. I find that attitude daft, dangerous and downright disrespectful.

And disrespectful because you won’t know the law or the cultural norms of the place. Is it frowned upon to eat with your left hand? Will bribing a police officer land you in jail, or is that just the way things are done? Is jaywalking against the law there?

These days, with the incredible amount of information available on the Internet, there’s no excuse for not knowing the basics. 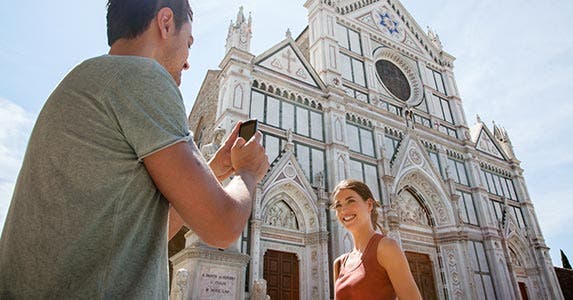 Try not to get mugged

It doesn’t matter where you are in the world; tourists are often the natural targets for thieves. Keep your valuables zipped up, use hotel safes whenever you can, don’t frequent dodgy parts of town on your own in the dark, and travel with a “mugger’s wallet” with a couple of out-of-date bank cards and a bunch of old $1 bills stuffed inside.

Don’t flash jewelry or money around — in fact, who travels with jewelry? If it has any substantial monetary or sentimental value whatsoever, just leave it at home.

Although this might not be possible for business travelers, I made a conscious effort to make myself look fairly disheveled — T-shirts and jeans being the order of the day. The bags containing my laptop and video camera were made of brown canvas, purposely frayed and weather-worn. I simply didn’t look like I had anything of value on me, even though I did.

Finally — and this should go without saying — a lot of the stories I hear about people being mugged while abroad begin with the same 7 words: “Well, I was buying these drugs and …” 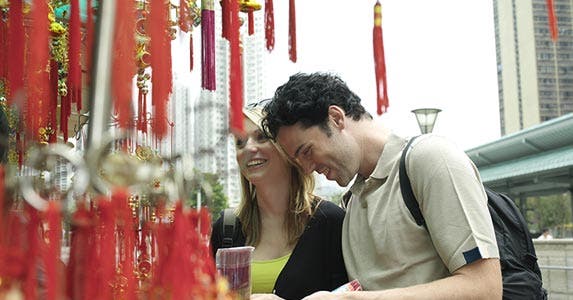 Don&#8217;t make it easy for pickpockets

In most countries, the law comes down hard on people who attack tourists. Therefore, most criminals will go out of their way to avoid confrontation, which is why you need to be on constant guard against sneakier pickpockets and other opportunists.

Unless you’re hiking to the South Pole, a small backpack is a must. Not only will it make getting around a heck of a lot easier (and make using local public transportation a lot less of a hassle for everyone), it means you can keep the darn thing with you on long-distance buses — relieving you of the stress of having your bag stowed away under the bus or, even worse, on top of it.

Another tip: Try not to stand in the middle of the street with your backpack, reading your guidebook. Keep moving, even if you’re waiting to cross the road. Sway to the left and right — otherwise somebody could be rummaging around in your bag and you might not feel it.

Be smart about police corruption

In some countries, it’s not the thieves you really have to worry about; it’s the authorities. In a country where corruption is rife, you may well find yourself in a sticky situation that could lead to your wallet being emptied at gunpoint or even land you in jail with no charges, having done nothing wrong.

Here’s how to protect yourself from a shakedown: Keep less than $10 (or equivalent) in your wallet. Hide the rest about your body. Show them the contents of your wallet, and explain that you don’t have much money. Usually they’ll agree to take just a few dollars and wave you on your way.

A trick taught to me by a fellow backpacker: If you’re going to be crossing a lot of borders or traveling through a country in which bag inspections are the norm, keep your dirty underwear at the top of your backpack; few officials are going to want to rummage through that.

Finally, KEEP SMILING. Try to engender a sense of camaraderie, and you never know, they might just let you go with a slap on the wrist.

Learn to win on foreign ATMs

First up: chill. Most foreign banks have an air-conditioned ATM room and a security guard standing by to ensure you won’t get mugged. But do shield your PIN. You might, however, still get robbed — by the bank. For example, take the equivalent of about $450 out of a current British account with HSBC in, say, Panama, and you’ll get whacked with a $20 transaction fee. That would easily pay for a good night out in Panama.

So be smart: Use your credit cards whenever you can (but NOT at ATMs), and see if you can get a bank account that offers to waive the transaction fees. Some of the big banks offer this service, but they rarely advertise the fact.

Finally, beware an ATM trap: 99% of ATMs on the planet give you your card back first, and then your money. But 1% work the other way: money first, then card. It’s basic human psychology that when you’re taking money out of an ATM in a foreign country, you want to shove it in your wallet or pocket or whatever as quickly as possible and get out of there. Don’t leave your card behind. 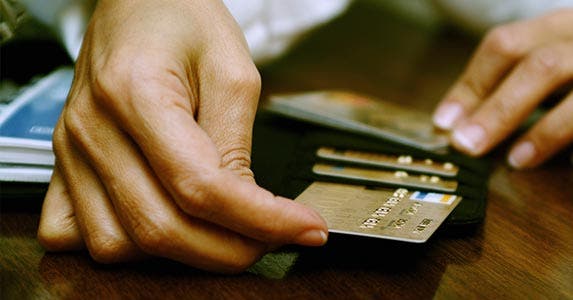 Bank yourself some bank cards

For reasons that should be blindingly obvious, very few people travel with huge wads of cash anymore — and traveler’s checks are a relic of a (thankfully) bygone age. Most people rely on their bank cards, and one surefire way to mess up your trip is to lose them. Your bank may have branches in 57 different countries, but it’s highly unlikely any of them will issue you a new card while abroad.

So spread the risk: Take at least 2 credit cards with you. Set up 2 separate current accounts with 2 separate banks. Share those accounts with somebody you’re not traveling with (yet trust implicitly), and take that person’s cards with you as well. That way, if you lose your ATM card, you can cancel it, yet continue to use the other with no problems (so long as you remember the PIN).

Keep all these cards in separate places: zipped pockets, secret money pouches, maybe 1 or 2 in the bag you carry with you at all times. Make it so there is virtually no way you could possibly lose all of your cards at once.

Scams. Every place has them. From New York to Nuku’alofa, Tonga, there are people who want your cash, and they don’t necessarily want to pull out a knife to get it.

Beware the straightforward gouging for a taxi ride or souvenir, as well as the more elaborate hoaxes such as:

If something sounds too good to be true, run for the hills!

One thing that often trips up travelers all over the world is the fact that they don’t want to seem impolite. Don’t let that politeness get the better of you, and make no mistake: If money is being demanded, you’re not the one being rude. 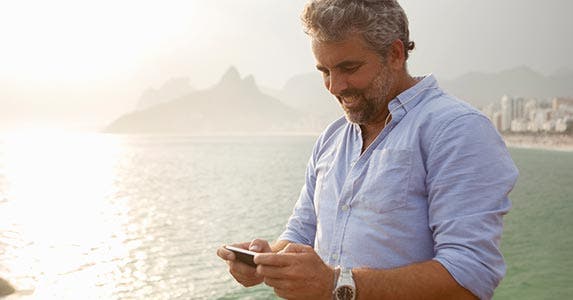 You want to travel with both a smartphone and a cheap cellphone for emergencies. You can keep the cheap handset turned off, but ensure the battery is fully charged and that you have a pay-as-you-go SIM card from home in it at all times. Have it connected to your Twitter account, so you can send a text-message tweet in emergencies.

Whenever I ran into trouble with police, it was my cellphone they confiscated first. They often don’t expect you to have 2. I managed to get a tweet out, using my spare phone, from the lavatory of a police station, telling the world I had been arrested in Congo. Within a few hours, the British Embassy was working on getting me out.

Meanwhile, get your smartphone unlocked, and use a local SIM card in it. Always make a note of the local number for emergency services. Try not to use your home SIM at all, except in emergencies, or you’ll get mugged with the biggest phone bill you’ve ever seen. I would strongly recommend a smartphone that allows you to change the battery and to take a spare that you keep fully charged. 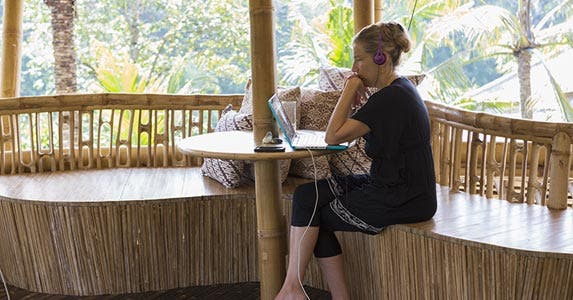 Use your own laptop

Laptops are getting smaller and lighter every day, and I would seriously recommend taking one on long trips.

First of all, free Wi-Fi is everywhere these days (except posh hotels), so the days of stumbling around in the baking heat looking for a cybercafe to send an email from are a thing of the past. Ensure that your laptop or tablet is password-protected, and sign out of everything when you’re not using the device. Use different passwords for your most commonly used apps and websites. If you’re traveling through a religious country, delete any porn and your search history before you enter. I’ve had my laptop scrutinized in Iran and Saudi Arabia, and if they had found anything untoward, I could have been in for a lengthy jail sentence, at the very least.

It really pays to back up all your photos, videos, notes, and everything else to the cloud. We know we should do this, but how many of us actually do? Make a habit of doing it every time you get a decent Internet connection. There are few worse things in life than losing all of your holiday snapshots. 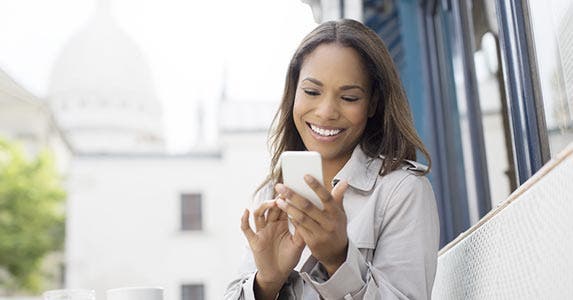 I saved the most important for last. If you’ve seen the movie “127 Hours,” you’ll know why this is so crucial. In this era of unprecedented connectivity, there simply is no excuse for not letting as many people as possible know your location from one day to the next.

When I’m on the road, I make sure that if I don’t post anything online for 24 hours without some kind of notice (such as saying, “I’m going to be on a ship”), my friends and family will automatically assume something is amiss.

Also, CouchSurfing.com and Airbnb are good for letting the locals know what time you’re planning to arrive at any given place, so they can raise the alarm if you’re a no-show.

Finally, don’t get paranoid. Technology has not only made travel easier than ever before; it also has made it safer than ever. Most people you meet along the way are going to be genuine, sweet, friendly and helpful. A bit of natural caution is good, but don’t let it overwhelm you. Travel is all about being open to the world and its amazing possibilities.