If you’re thinking of following in President Obama’s footsteps and visiting Cuba, don’t count on plastic to pay for your arroz congri and mojitos on the island.

The vast majority of U.S. credit and debit cards won’t work there, and that can create some serious challenges for American travelers.

Cash is king for Americans

Unless they have a debit or credit card issued from a foreign bank, American visitors to Cuba should count on taking every dime they expect to spend in Cuba in U.S. dollars or euros.

And don’t bother trying to get Cuban currency in the United States ahead of your trip, says Jose Gabilondo, a professor of law at Florida International University.

“At some point soon, perhaps in a few months, it’s conceivable that some U.S. banks will keep pesos, but not yet,” he says.

Once they touch down in Cuba, travelers can swap dollars for Cuban money at the airport or in town at places called CADECA, short for “casa de cambio,” all of which offer the same government-regulated rate of exchange, Gabilondo says.

Because getting a cash transfer from back home can be almost impossible for Americans, travelers should budget carefully, including good-sized cushion for unexpected expenses, says Pedro Freyre, head of the international practice group at Akerman LLP and an adjunct professor of law at Columbia University.

“Cuba is not a place where you want to be stuck without money,” he says.

He recommends carrying some cash on your person at all times, and also keeping a separate stash in your luggage in case you run into unexpected difficulties.

Why your plastic won’t work in Cuba

Neither American Express nor Discover does business in Cuba now, according to company spokespeople. But the 2 biggest global payment networks, MasterCard and Visa, both say they are able to process transactions in Cuba. The problem is American banks, which issue our credit and debit cards, aren’t yet willing to do business in Cuba.

“In order for the cards to be utilized (in Cuba), there has to be an accepting bank in the U.S. that authorizes their use — that basically accepts the charge,” Freyre says.

Only 1 U.S. bank, Florida-based Stonegate Bank, issues a debit card that will work in Cuba. 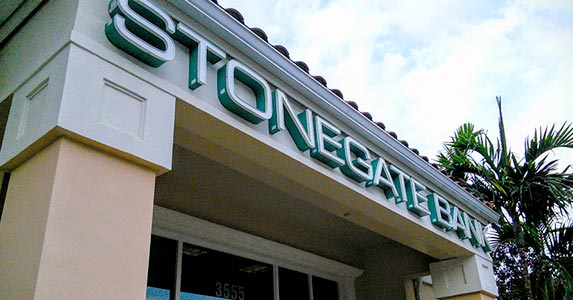 Stonegate Bank is the only U.S. bank issuing debit cards that work in Cuba. | Photo by Holden Lewis

Why the lack of urgency among U.S. banks to work with Cuba? “They see a limited market that is counterbalanced by a very difficult regulatory environment and a lot of regulatory risk,” Freyre says. “It’s a market that has been a black hole for 55 years.”

Despite an easing of restrictions by the Treasury’s Office of Foreign Assets Control, which is in charge of implementing many of the regulations around the Cuban embargo, banks “have a number of other bank regulatory issues and concerns,” including anti-money laundering rules, Freyre says. “When they look at the total Cuban market, which is not terribly exciting for a big bank, they’ve reached the conclusion that the game’s not worth the candle.”

That may begin to change if a few pioneering banks venturing into the country meet with success there, but it may take a while, he says.

Double currency can cause confusion

OK, so you have to work with cash. No big deal, right? But even cash can get complicated in Cuba, which has not 1 but 2 currencies:

* The Cuban Convertible Peso, or CUC (pronounced “kook”), a “hard” currency roughly pegged to the value of the U.S. dollar.

* The Cuban Peso, or CUP (pronounced “coop”), a “soft” currency with a fluctuating exchange rate.

Because of this, “it’s almost like there are 2 economies in Cuba,” Gabilondo says: One for tourists and a growing Cuban middle class, who get hard currency through salaries or remittances from U.S. relatives, and one for Cubans who don’t have access to CUCs.

American travelers typically use CUCs, which are currently worth around 24 times as much as CUPs, but prices can get confusing very quickly when travelers venture outside tourist areas, Gabilondo says.

“If you go from sort of tourist bubble to tourist bubble, you’ll never be aware of this, because everything will be CUC,” Gabilondo says. “But if you get off the ‘yellow-brick road’ and just walk down a Cuban street, if you go on some sort of adventure, you’re pretty soon going to have to reckon with these 2 separate economies.”

Without the ability to get more cash from back home, carefully budgeting your cash is key, says Akerman’s Freyre.

He recommends doing some homework ahead of your trip to carefully nail down costs so you don’t run out of cash.

“It’s important to understand upfront, more than any other place, what your room rates are going to be, how much you’re going to pay,” Freyre says. “You’ve got to do some homework on what you expect to pay for food. It’s cheaper than the U.S., but you need to know that. You need to know how much a taxi is, how much it’s going to cost me to get from the airport to downtown Havana.”

While that sounds like a lot of work, it also could be a good learning experience. FIU’s Gabilondo says his many visits to Cuba have helped him becoming a better at keeping a budget back home.

“When I went to Cuba, I realized that I only had the money that I brought with me, because there was no way of getting an advance on a credit card or using an ATM. I learned how to ration and learned how to budget from going to Cuba, because I realized I had no backup source of liquidity,” Gabilondo says. “I found that a very useful lesson.”