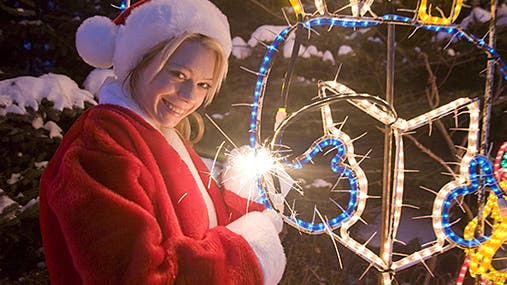 Dreaming of a bright Christmas

If you’ve ever watched the holiday classic “National Lampoon’s Christmas Vacation” and felt an affinity with the decoration-happy Griswolds, you’re in good company. Every holiday season brings out a few “super celebrators” whose over-the-top light displays and decorations draw gawkers from around town and even surrounding states.

According to the Guinness Book of World Records, the record holders for the largest number of holiday lights are David and Janean Richards of Canberra, Australia. Their 2011 extravaganza of more than 331,000 lights included 18 miles of strings, 15,000 cable ties and a 60-foot Christmas tree, the (London) Daily Mail reported. David, who refused to tell people (including his wife) what the display cost, said he wouldn’t repeat the feat.

Join us now on a tour of some of the largest holiday light displays in the U.S. — and read about the real-life Clark Griswolds and their often-spectacular electric bills. 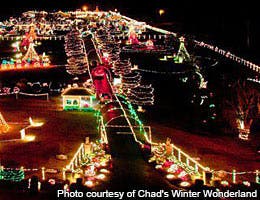 How many lights: Nearly 2 million on 8 acres

Chad Barnard’s love affair with all things Christmas began when he was 12 and his aunt asked him to help decorate her house. A few thousand strings of lights later, Barnard now puts together an annual drive-through display between Thanksgiving and New Year’s that’s so extreme people come to his Nashville, Tenn.-area neighborhood from several states away.

Just setting up the items — which he says include a 60-by-20-foot Nativity scene, more than 350 pieces of scenery, 90 lighted drive-through arches and 15,000 feet of extension cord — takes two months. It takes another two to pull it down. And that’s not counting the time spent shopping for items, planning designs and figuring out logistics. “Usually I’m with it six months out of the year,” Barnard says.

Whenever he considers unplugging his now 30-year tradition, Barnard thinks about the memories that have come from the display. One man proposed to his wife amid the lights, while another couple said the only thing they agreed on in their divorce was that they’d donate their decorations to him.

“This is just something I was born to do,” he says.

A legacy in lights at Disney World 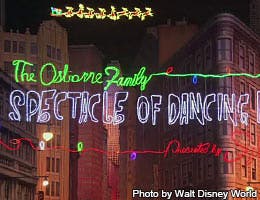 What: “The Osborne Family Spectacle of Dancing Lights”

How many lights: More than 5 million

Some holiday light displays become hugely popular with the tourists, but with the neighbors, not so much.

The late Jennings Osborne mounted a Christmas display of more than 3 million lights at his 22,000-square-foot Little Rock, Ark., home before local residents sought legal intervention. The case got all the way to the U.S. Supreme Court, where justices in 1993 refused to block a lower court’s order that the display be toned down.

Once Osborne lost his legal battle, Florida’s Walt Disney World contacted the businessman about taking over his decoration collection. The spectacle, now even bigger, has been hosted by Disney’s Hollywood Studios theme park each holiday season since 1995. About every 10 minutes, there’s a light show that’s choreographed to traditional holiday music and ends with imitation snow. 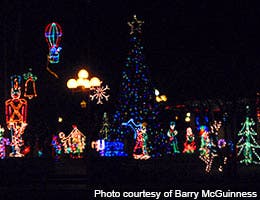 What: Lafreniere Park’s “Holiday in the Park”

How many lights: Thousands

Just like Osborne, Louisiana businessman Al Copeland faced constant opposition over his elaborately decorated home in suburban New Orleans. Although thousands of the locals considered it a holiday tradition to view the display (where Copeland, the founder of the fried chicken chain Popeyes, would occasionally greet visitors with candy and stuffed animals), neighbors complained about the gaudy show.

After Copeland’s death in 2008, his family demolished the mansion and donated the decorations to Lafreniere Park, a public park run by Jefferson Parish. While the Copeland collection makes up only a third of the park’s lights, some of the multimillionaire’s most recognizable pieces are included, and his relatives usually join in when the switch is flipped on the first day, says Barry McGuinness, an administrator at the park. “We still have the family very involved in what we do.”

Lights in the West Texas town of El Paso 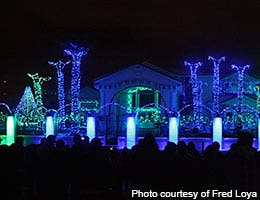 A 2004 YouTube video of a small home bedazzled with lights inspired El Paso, Texas, insurance agent Fred Loya to jump into the holiday illumination arena. “I thought it was just awesome,” he says. “I asked my maintenance chief if we could do that.”

Now, people come from as far as 2,000 miles to see Loya’s light show, which is turned on every Friday, Saturday and Sunday during December, plus Christmas Eve, Christmas Day and New Year’s Eve. He invites civic groups and others for special shows, and college football teams playing in the city’s Sun Bowl and soldiers from nearby Fort Bliss have come. Loya also has encountered friction from some of his neighbors, but the show goes on.

A dazzler in the desert 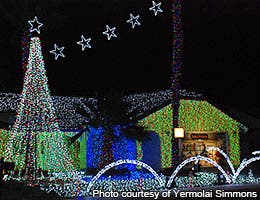 Electric bill: Because he uses only LED lights, Michael Simmons says powering his display costs just $50 per month. Regular lights would cost up to $800 per month, he says.

Michael Simmons has always liked Christmas, but it wasn’t until the computer consultant realized in 2007 that he could control, connect and synchronize his holiday lights with the help of programming that he decided to go big.

How big? He says his display near Palm Springs, Calif., boasts a 24-foot Christmas tree made of lights and LED-RGB bulbs, which allow computers to dictate the color of each light on the string.

Simmons used to do the programming himself, but the job has become too mammoth. “I hire programmers to do the sequences,” he says. “We’re at the point where it takes 40 to 50 hours just to synchronize one minute of music.”

All that work can get overwhelming, he admits. “You have to take a step back and not get stressed about it.” 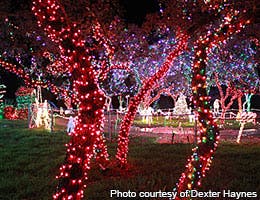 Electric bill: Two years ago, the display’s impresario, Dexter Haynes, paid $1,000 for one month of electricity for 500,000 lights. He’s phasing in LED lighting and says he chopped the monthly bill to $600 last year.

The 22-year-old Haynes is already a holiday mega-lights veteran and has felt burnout — no pun intended. After nine years of growing his holiday drive-through show in the Hill Country west of Austin, Texas, he was about ready to pull the plug.

But he changed his mind and decided to go even bigger in 2012 by adding a form of animated lights called Holidazzle along with a fireworks show to open the season.

During crunch time, he finds that the people in his life do what they can to help. “My family gives me moral support,” Haynes says. “And my friends end up doing whatever they can to pitch in. Someone will show up and stay up all night with me.”

Yes, Virginia, we have inflatables 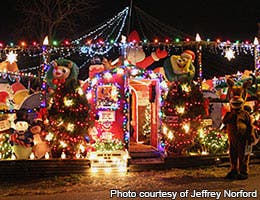 Let the season’s other superdecorators go crazy with their light strings. Jeffrey Norford, who has been doing up his Charlottesville, Va., home for 18 years, focuses instead on inflatable figures.

Besides the usual suspects — Santa, the Grinch, Frosty the Snowman — his yard contains Bart and Homer Simpson, the Cat in the Hat and Winnie the Pooh (Tigger, too). Stewie from “Family Guy,” an Angry Bird, Cowboy Santa, Yoda and Darth Vader, and Mike and Sully from “Monsters Inc.” were added this year, he says. “Every year, I keep an eye out for what’s new.”

During the offseason, Norford stores his decorations in plastic bins stacked to the ceiling in a 10-by-20-foot shed specifically built for the gear. Even then, dry rot can eat away at the figures, he says. Still, he prefers his inflatables because not only do they not take as long to set up, but they also create an impact. “I can put 10 of them in a row side by side,” Norford says. “My yard is small, but it’s pretty packed.”