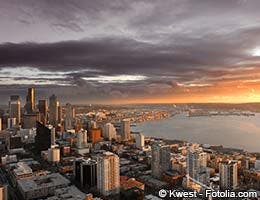 When travel agency owner Melisa Keiser receives calls from December deal-seekers, they’re frustrated. They want the perfect place at the perfect price on the perfect date, which is perfectly impossible, of course, especially during the busy holiday season.

“In most cases, you have to pick 2 out of 3” for location, price and travel dates, says Keiser, the owner of Carmel Travel Co. in Carmel, Ind. If you need a low price, you might not be able to book your dream destination. If you want the location, your dates might not be available at the price you need.

But wait. Don’t resign yourself to dry turkey and family guilt just yet. For a budget winter travel destination, Bankrate compiled 10 surprising locations that might fit the bill. Price estimates were correct at the time of writing.

Deal-seekers skip flights to the Caribbean and Mexico and look to North Florida instead. “The southern, warmer parts are busy, so look further north to find availability,” Keiser says.

The northern half is cooler — highs reach the 70s — but this location also halves the prices. Florida’s Space Coast area offers the Kennedy Space Center, a skating rink, easy access to Orlando and Atlantic Ocean beaches. 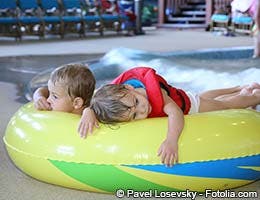 “They have nice suite setups for families and a deal where you get water park passes for the days you are there, not just the nights,” says Julie Sturgeon, owner of travel agency Curing Cold Feet in Indianapolis, referring to Great Wolf Lodge properties. “One night would be two days’ worth of passes.” 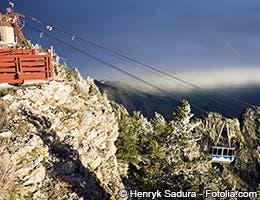 Where else to meet Santa but in Santa Fe, N.M.? Here, tourist crowds drop when the temperatures dip. So you’ll find plenty of rooms and deals amid daytime highs in the 50s and 60s. Traditional plazas and markets fill with candles, handmade crafts, food and a rich, cultural heritage.

“There is something very appealing about winter in Santa Fe, especially during the December holidays,” says Jim Luttjohann, director of the Santa Fe Convention and Visitors Bureau. “The nearby Southern Rockies are covered in snow, our food scene is at its most savory, and the whole town is filled with yuletide activity.”

“Most of the seasonal events are free, including the very popular Christmas Eve Farolito Walk through the historic East side,” he says. The farolitos are votive candles in paper bags illuminating every sidewalk, wall, house and building.

Real deal: Example: The colorful Lodge at Santa Fe starts at a mere $80 per night. 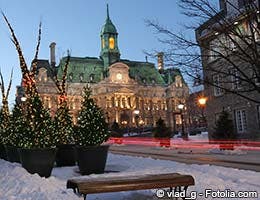 Low hotel rates mean you’ll have more loonies and toonies — the Canadian $1 and $2 coins, respectively — for browsing the underground pedestrian network with 21 miles of shopping, dining and entertainment options. Or you could enjoy a spa treatment on a refurbished ferryboat, appreciating Degas and Monet at the Montreal Museum of Fine Arts, and wish locals a joyeux Noel amid 17th-century stone buildings in Old Montreal, the oldest area in the city.

Real deal: Through Dec. 31, the Fall Sweet Deal offers half off for a second night’s stay in more than 35 properties. Rates start at just $92 per night. 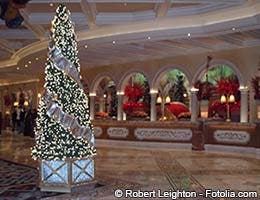 The phrase “holiday lights” takes on a new meaning in glitzy Las Vegas, where neon mingles with festive bulbs. But that giant light overhead is nice, too. Sunny-day highs roam around a balmy 56 degrees in this desert city, “And there is still loads to do while you’re there,” Keiser says.

Spend Christmas Eve enchanted by the magic of a Penn and Teller show or Cirque du Soleil performance, and those slots still ring on Christmas and New Year’s Day. Best of all, the average nightly rate year-round is just $107 per night, according to the Las Vegas Convention and Visitors Authority.

Real deal: THEhotel at Mandalay Bay offers a room with a view of the Las Vegas strip for $65 per night. 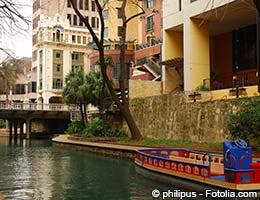 This historic city is home to the Alamo and the River Walk, a public park and walkway along the San Antonio River, which reflects twinkling lights as it meanders past hotels, restaurants, art galleries and shops. Lasso great money-saving coupons from the San Antonio Convention and Visitors Bureau, including one for $10 off per ticket into SeaWorld San Antonio or adult tickets for kid prices at Six Flags Fiesta Texas.

Visitors also can giddyap to the nearby Hill Country, which rounds up antique shops, cozy bed-and-breakfasts, and funky restaurants. Imagine spending the night in a B&B with a roaring fireplace, then shopping the quaint, German-influenced Fredericksburg, Texas, Keiser says.

Real deal: A room at Hyatt Regency on the San Antonio River Walk welcomes visitors at just $99 per night, according to Keiser. 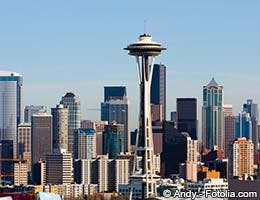 It rains in summer. It rains in winter. But those raindrops are less expensive to look at during Seattle’s off-season, roughly November through April. More than a dozen hotels offer affordable packages, including many shop-and-sleep deals.

“We have some really incredible, budget-friendly winter activities,” says Kauilani Robinson, spokeswoman for Seattle’s Convention and Visitors Bureau. Quirky, oh-so-Seattle options include holiday cruises stocked with caroling choirs. There may not be a better time to enjoy this brew-pub-and-coffee city’s indoor culture, plentiful museums, cozy bookstores and intriguing arts scene.

Real deal: Sheraton Seattle Hotel packages start at $209 per night and include a $100 Macy’s gift card for each night and complimentary photos with Santa Claus at the downtown Macy’s store. 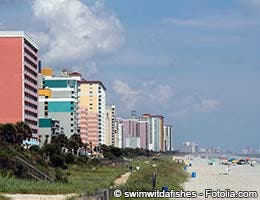 Ring in the year amid grand history at one or more of the 1,200 South Carolina sites on the National Register of Historic Places.

Walk on Charleston’s cobblestone streets, along Hilton Head’s harbor or on the sands of budget-minded Myrtle Beach.

Although snowbirds visit in winter, low-season rates knock prices down by a third to half off. “Already known as a budget-friendly destination, even during peak summer season, prices really drop in the winter (in Myrtle Beach),” says Ann Marcum, spokeswoman for Visit Myrtle Beach. “The weather is still relatively mild, and there are lots of indoor and outdoor attractions minus the summer crowds, so it’s a great winter-break option.”

Real deal: Stay in the luxurious Inn at Harbour Town in Hilton Head, S.C., for around $127 per night on Christmas Eve, typically $299 on summer weekends. 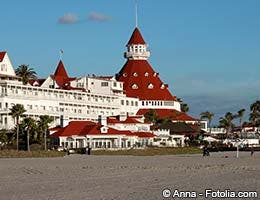 Pack those shorts. The weather is a near-perfect mid-60s, and it’s not unusual for the thermometer to hit the 70 degree mark in late December. But the holidays are still considered San Diego’s offseason, with regular deals to entice visitors into unoccupied rooms.

Real deal: In San Diego, The Sofia Hotel starts from $99 over winter break, and Christmas Eve only costs $139 per night.

Chi-town offers a lovely mixed cocktail of urban sophistication, holiday events and discounted rooms. “Make a new tradition by going to the top of the John Hancock Tower,” which is a 1,127-foot high excursion, Keiser says. Say “hi” to Santa while you’re up there.

Or dine at Macy’s seventh-floor Walnut Room, where the 45-foot artificial tree is decorated with more than 1,200 ornaments and 25,000 lights, she says. If shopping’s your bag, pick up holiday swag from one of more than 900 shops in Chicago’s Magnificent Mile, Keiser suggests. She recommends rockin’ around the Christmas tree at the Hard Rock Hotel on North Michigan Avenue, which offers easy access to the Windy City’s shopping scene.