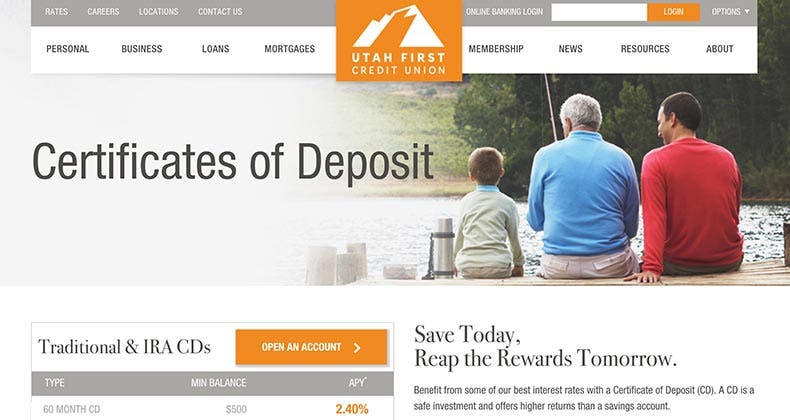 One of Utah’s largest credit unions has an attractive offer for savers nationwide.

Compare this offer with the best 60-month CD rates, then calculate how much interest you’ll earn when your CD matures.

Who should get this CD

Five-year CDs tend to have higher yields than savings accounts and CD accounts with shorter terms, but they’re not for everyone. A CD that matures in 12 months or less might be a better choice for some savers, particularly in a rising rate environment.

A long-term CD could be perfect for someone who wants to purchase multiple CDs with different maturity dates. When you effectively implement the strategy known as CD laddering, you’ll have CDs maturing at regular intervals. You’ll have a high rate of return and funds you won’t have to wait long to access.

Becoming a member of the Utah First Federal Credit Union is easy. You can qualify if you:

All new members must open a base savings account. Fifty dollars is the minimum deposit and the minimum balance requirement.

You can apply for membership online, over the phone or in person. Utah First has nine branches in cities such as Salt Lake City, Provo and West Valley, Utah.

To open an account, you’ll need a government-issued ID such as a driver’s license. Be prepared to provide personal details including your Social Security number and mailing address.

The National Credit Union Administration insures savings of up $250,000. Depending on the way you structure your accounts, the federal government may protect even more of your money.

Just note that you’ll face consequences for withdrawing funds from your CD before it matures. A representative told us that for CDs that mature in 18 months or more, the penalty is 180 days of interest on the amount withdrawn.

If you don’t want to tie up your funds for several years, you could opt for a high-yield money market account or savings account instead.

Utah First Federal Credit Union is based in Salt Lake City. It was founded in 1935 and now has more than 20,000 members nationwide.

The credit union earned four out of five stars on Bankrate’s latest Safe & Sound Ratings, which measures the financial health of banks and credit unions throughout the United States.