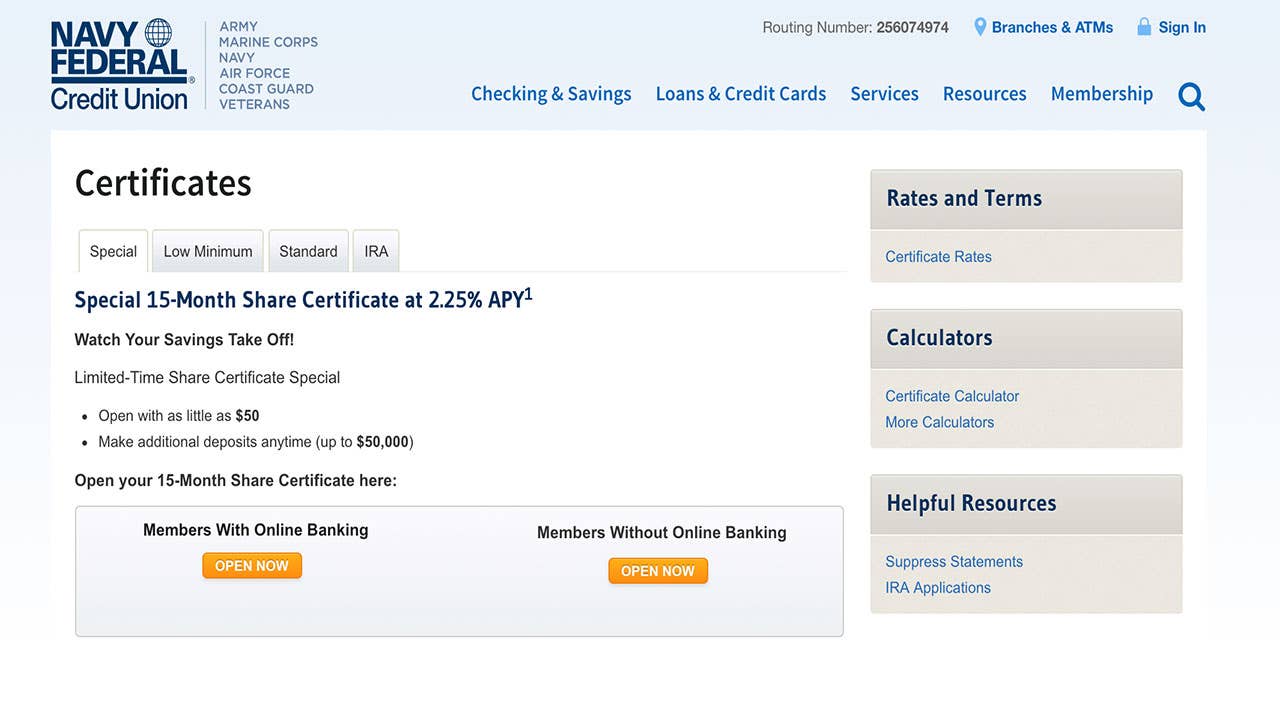 The world’s largest credit union has a nice gift for savers: a high-yield, short-term CD special.

Navy Federal Credit Union’s 15-month share certificate pays 2.25 percent APY. This rate is around 50 basis points higher than the top 1-year CD rates (a basis point is one-hundredth of a percentage point). And it’s on par with some of the best 4-year CD rates.

Nearly anyone with money in the bank can qualify. The minimum deposit is just $50. That’s what makes this CD ideal for new investors and folks who can’t afford to lock up thousands of dollars for months at a time.

High rollers, however, might be disappointed. The most you can deposit in Navy Federal’s 15-month share certificate is $50,000.

Compare Navy Federal’s deal with other nationally available CD rates. Then calculate how much you could earn by the end of your term.

Navy Federal’s 15-month CD has more to offer than its impressive interest rate. It also functions like a savings account.

For most CDs, you’re expected to make one upfront deposit and leave the funds in your account until it comes due.

With Navy Federal’s 15-month CD, you can deposit money into the account at any time. You could make one deposit now and a second one whenever you receive your end-of-year bonus (or when you have extra cash lying around).

Becoming a Navy Federal member is easy. You’ll qualify if you are:

To join, you’ll need to share the following information:

You can apply for membership online, over the phone or in a branch. New members must open a savings account and deposit at least $5.

New and existing members can open share certificates online or in a branch.

If you’re buying a 15-month CD, you can make your first and ongoing deposits by transferring money from an external account electronically, initiating a wire transfer or mailing a check.

Navy Federal Credit Union is based in Vienna, Virginia. It was founded in 1933 and today serves more than 7.3 million members. In July 2017, it opened its 300th branch.

The credit union earned five out of five stars in Bankrate’s latest review of its financial health.