Single women tend to earn less and have smaller bank accounts than men, but that hasn’t stopped them from becoming a powerful force in the housing market.

Women increasingly represent the second-largest homebuying group behind married couples. Part of the reason females outpace others in the residential real estate market is their ability to find cheaper properties and cash for downpayments that is less tied to their savings accounts, according to research from the National Association of Realtors.

“We do know single females tend to really value homeownership, not just as a financial investment but also as a place where they can live,” says Jessica Lautz, director of demographics and behavioral insights at NAR. “They really desire a place they can own and call a place of their own.”

Roughly a fifth (18 percent) of all homebuyers were single women in 2018, according to the National Association of Realtors’ 2018 Profile of Home Buyers and Sellers. The report released this fall shows married couples still dominate the residential real estate market, accounting for just under two-thirds (63%) of all home sales in 2018. 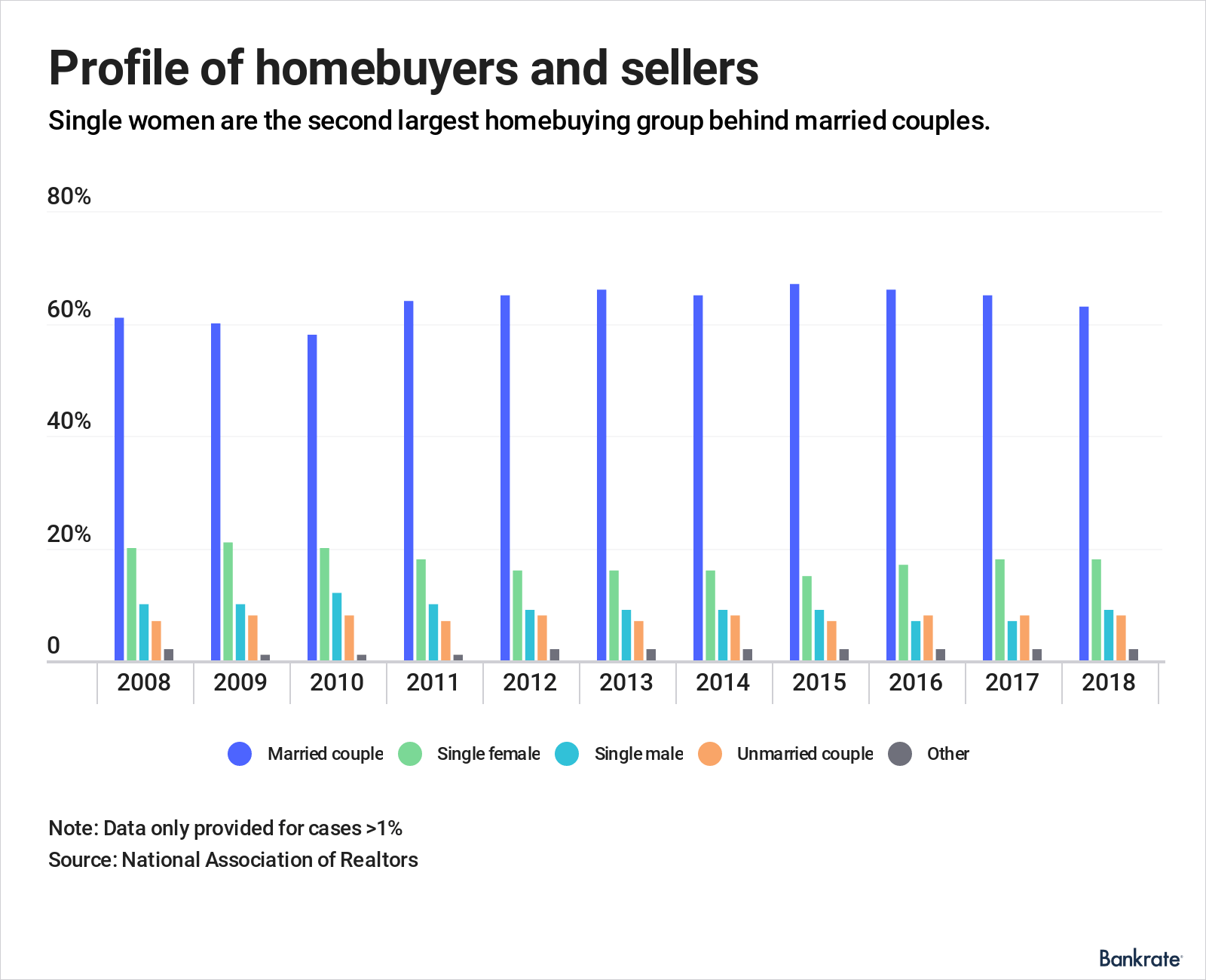 Of the three largest homebuying groups — married couples, women and men — only the percentage of single women grew since data collection began in 1981. During the last 37 years, single women rose from 11 percent of the homebuyers to 18 percent. Meanwhile, married couples fell from 73 percent of buyers in ’81 to 63 percent this year.

Ten percent of buyers were men in 1981 compared with 9 percent this year, according to the report.

Looking at how females are covering their downpayments gives clues to how they’re securing homeownership at a faster rate than men and others.

“Women are using savings, equity from their past homes and gifts and loans from relatives. The latter is more common for first-time buyers,” Lautz says. “Men rely more on their personal savings and on the sales of stocks and bonds.”

Women are less likely than the average buyer to tap into their saving accounts for a downpayment. Just over half (52 percent) of females use savings to cover the initial cost of homeownership compared with 62 percent of men and 58 percent of married couples, NAR research shows.

A significant percentage of women (39 percent) reported using proceeds from the sale of a previous primary residence. Only 31 percent of men said the same.

“Many very likely are coming from a past relationship,” Lautz says. “The median age for single female buyer is 54 years old.”

Women coming out of divorce may be interested in using the money from the sale of a home they purchased with their former spouse to buy a new property. Some widows are also likely adding to the number of single female homebuyers.

After going through a divorce, Melissa Reed purchased a roughly 2,000-square-foot masonry home in Lake Geneva, Wisconsin, in November 2016. The chief financial officer and insurance executive secured the property for $215,000.

“Owning my own home is very important to me,” Reed says. “I have three children, two of which still live at home. My daughters are 11 and 16 and I didn’t want to have to worry about moving and uprooting them if I was renting. I wanted a space I can customize and create as our haven. I also wanted to have it as an asset, in addition to my investment account.”

Single women are outpacing men across the board: in each age group and for both first-time house shoppers and repeat customers, Lautz says.

Reed purchased a smaller home to set herself up better financially. She recommends other prospective homebuyers take a hard look at their budget and make sure they aren’t over extending-themselves.

“For me, this was really important because I don’t have a family member that could bail me out if I got in over my head,” she says. “It’s also really important to factor in property taxes, insurance costs, and maintenance.  I also looked at what my long-term goals were, and realized I wanted a smaller house and a smaller house payment because I wanted to put more money away for retirement.”

As home affordability continues to fall throughout the country experts worry that there will be a decline in women and other groups who enter the housing market through buying properties with less-expensive price tags. The share of first-time homebuyers recently continued a three-year decline to 33 percent in 2018, according to NAR.

“With the lower end of the housing market – smaller, moderately priced homes – seeing the worst of the inventory shortage, first-time homebuyers who want to enter the market are having difficulty finding a home they can afford,” says Lawrence Yun, NAR chief economist. “Homes were selling in a median of three weeks and multiple offers were a common occurrence, further pushing up home prices.”