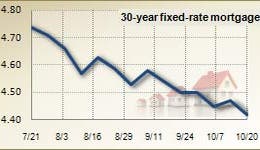 The benchmark 30-year fixed-rate mortgage fell 5 basis points this week, to 4.42 percent, according to the Bankrate.com national survey of large lenders. A basis point is one-hundredth of 1 percentage point. The mortgages in this week’s survey had an average total of 0.35 discount and origination points. One year ago, the mortgage index was 5.34 percent. Four weeks ago, it was 4.5 percent — at the time, also a record low.

The 30-year fixed fell below 5 percent in mid-May and has been trending downward ever since. It reached 4.5 percent four weeks ago, and has remained at or below that mark since then.

Data from the National Bureau of Economic Research indicate that 30-year mortgage rates haven’t been this low since March 1953, when the average rate on an FHA-insured mortgage was 4.34 percent — and a typical house cost about $18,000.

Lenders in a bind

A decline in mortgage rates doesn’t seem to have brought a spike in loan applications. The Mortgage Bankers Association says there was a 10.5 percent drop in loan applications last week. The decrease isn’t much of a surprise, because many banks and businesses were closed for the Columbus Day holiday.

The situation puts lenders in a bind. On one hand, they’re in the business of persuading people to borrow money, and they excel at coming up with plausible reasons to do so now rather than later. On the other hand, the good loan originators warn that getting a loan nowadays takes a long time and consumes a small grove’s worth of paper.

Brian Koss, executive vice president of Mortgage Network, in Danvers, Mass., describes the loan process as “painful” because of the copious paperwork and lengthy underwriting times.

Government regulations and policies drive the need for time-consuming documentation — “a message that hasn’t gotten out to the people enough,” Koss says. “And they think rates are going to go lower, so they figure, ‘What’s the rush?'”

Lately, Koss has been telling customers that refinancing now will help them achieve their financial goals.

“Now is the time to free up cash and get liquid,” he wrote in a recent blog post. “Get back on plan and increase the funding of 529s and IRA/401(k)s. Do this by consolidating debt into a longer 30-year fixed rate, and be disciplined through autopay to make these key investments now. Paying down your mortgage by paying extra or a 15-year loan only works if your college and retirement plan is fully on track and been blessed by a qualified planner.”

In an interview, he reiterates the importance of hiring advisers. “Your team — estate attorney, financial planner, CPA — should be all part of it.”

In other news, the Federal Reserve’s latest Beige Book — a summary of economic activity by region — concludes that “on balance, national economic activity continued to rise, albeit at a modest pace” in September and early October.

The report said the pace of home sales was down compared to that of a year ago, but added that “reports on prices suggested stability, however.”