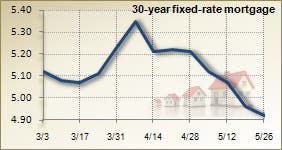 The benchmark 30-year fixed-rate mortgage fell 4 basis points this week, to 4.92 percent, according to the Bankrate.com national survey of large lenders. A basis point is one-hundredth of 1 percentage point. This is a record low in the history of Bankrate.com’s weekly survey, which goes back almost 25 years, to September 1985.

The mortgages in this week’s survey had an average total of 0.42 discount and origination points. One year ago, the mortgage index was 5.45 percent; four weeks ago, it was 5.21 percent.

Turmoil and uncertainty abroad tend to push down on mortgage rates in the United States, and that’s what happened this week.

“There’s so much uncertainty in Europe that we, by comparison, look stable,” says Bill Bartmann, who runs Bartmann Enterprises, a Tulsa, Okla.-based fund that invests in distressed assets.

Even with U.S. economic and fiscal troubles, “we have just won the ugly contest,” Bartmann says. “The money is moving from Europe to here, causing the rates to fall.”

Results of Bankrate.com’s May 26, 2010 weekly national survey of large lenders and the effect on monthly payments for a $165,000 loan:

It’s a matter of supply and demand. When money is moved from Europe to here, there is more money in the U.S. financial system, so money becomes cheaper. Cheap money is synonymous with low interest rates.

Refinance applications zoomed for the third week in a row, according to the Mortgage Bankers Association. With so many homeowners trying to refinance, lenders have some timely advice.

First, figure out if your credit score or your property value makes you ineligible to refinance.

The best mortgage rates tend to go to people with credit scores of 740 or higher. And it’s going to be hard to refinance the loan at an ideal rate if you owe more than 90 percent of the current value.

“Loan to value is the big issue,” says Jim Sahnger, who faces the challenge of lending in South Florida, where house prices have collapsed.

Sahnger, mortgage consultant for Palm Beach Financial Network in Stuart, says he looked at about 100 loans he did in 2004-05 for people who haven’t refinanced since. He compared their estimated outstanding balances with their estimated home values on Zillow.

Because of falling home values, these borrowers owed an average of 150 percent of what their homes were worth. They aren’t candidates for refinancing.

Second, know why you’re refinancing. Is it to cut your monthly payments? Is it to reduce the total interest you will pay over the life of the loan? Is it to consolidate debt? Each goal has a different refinancing strategy.

One particularly strong financial move is to refinance from a 30-year loan to a 15-year mortgage.

“I’m seeing a lot of people go down to a 15-year note at 4.25 percent from their 5.25 percent 30-year fixed,” says Michael Becker, mortgage banker for Happy Mortgage in Lutherville, Md.

Becker says quite a few people got their current mortgages when rates dipped in summer 2003. If they have equity, this is a good time to refinance into a 15-year loan, he says.

“Their payment goes up a little bit a month, but not much,” he says. “And they’re knocking eight years off it.”

They could save tens of thousands of dollars in the long run by refinancing.

Third, get ready for paperwork requirements that seem onerous — especially if your last loan was six or seven years ago.

These days, lenders expect borrowers to give them extensive income documentation — pay stubs, two years of W-2s and transcripts of tax returns to make sure that the documentation is real, Hackett says.

Fourth, accept that the process could take more time than you expect.

Sahnger says loan volume will pick up in the next few weeks, “and the timeline in order to get these deals done is going to take longer.”

A month ago, a 30-day lock might have been sufficient; soon it might be prudent to lock the rate for 45 or 60 days.