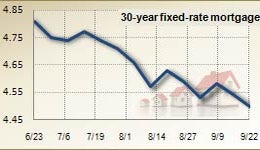 The benchmark 30-year fixed-rate mortgage fell 4 basis points this week, to 4.5 percent, according to the Bankrate.com national survey of large lenders. A basis point is one-hundredth of 1 percentage point. The mortgages in this week’s survey had an average total of 0.35 discount and origination points. One year ago, the mortgage index was 5.36 percent; four weeks ago, it was 4.59 percent.

Results of Bankrate.com’s Sept. 22, 2010 weekly national survey of large lenders and the effect on monthly payments for a $165,000 loan:

The Fed sent mortgage rates downward when its rate-setting Federal Open Market Committee worried publicly that inflation is too low. The Fed’s policy statement mentioned three times that inflation is uncomfortably low. It said inflation is at a level inconsistent with central bank’s mandate “to promote maximum employment and price stability.”

Central bankers said in the statement they were “prepared to provide additional accommodation if needed to support the economic recovery and to return inflation, over time, to levels consistent with its mandate.”

Chairman Ben Bernanke, in a recent speech, explained how the Fed would “provide additional accommodation” — first by buying bonds such as Treasury securities. This would add more cash to the banking system, presumably causing prices of goods and services to go up and long-term interest rates to go down.

Now, if there’s a possibility the Fed will pay top dollar for Treasuries in a few weeks — as the Fed’s statement implied — there’s an opportunity for investors to make profits: Buy Treasuries now and sell them when the Fed bids the prices up in a few weeks.

That seems to have happened in the day after the Fed announced its rate policy. Bond yields go down when bond prices go up. And Treasury yields went way down. The 10-year Treasury yielded 2.72 percent Monday and 2.53 percent Wednesday afternoon — an unusually swift drop.

And, as often happens, mortgage rates moved in the same direction as Treasury yields — downward. So, by hinting that it might start buying Treasuries in a few weeks, the Fed indirectly caused an immediate drop in mortgage rates.

With rates firmly at 4.5 percent, a new wave of refinancers might knock on lenders’ doors. Folks who haven’t gone through the mortgage process in a few years are in for an unpleasant surprise. Paperwork requirements are onerous. Atoning for lax lending during the boom, lenders are overcautious now, asking for verification and documentation of everything.

“We have to keep hounding borrowers for documentation,” says Michael Becker, mortgage banker for Happy Mortgage, in Lutherville, Md. “I always say to people I’d rather have too much, give me more than enough.”

Underwriters are on the lookout for borrowers who are hiding things. So when they request bank statements, they want every page. In a fairly common occurrence, a six-page bank statement will have “Page 1 of 6” printed on the first page, “Page 2 of 6” on the second and so on. Sometimes the sixth page is blank. Lenders want to see it anyway. If a bank statement promises six pages, the borrower has to deliver all six.

Loan officers plead with borrowers, often in vain, to follow instructions about delivering documentation. You’re not going to get a loan if you don’t provide all the paperwork. As Becker says, it’s best to err on the side of delivering too much documentation instead of not enough.