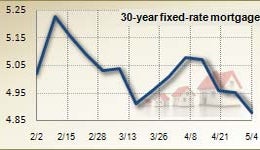 Mortgage rates fell this week as investors sought safety, amid concerns of global instability and the still-weak economy.

The benchmark 30-year fixed-rate mortgage fell 7 basis points this week, to 4.88 percent, according to the Bankrate.com national survey of large lenders. A basis point is one-hundredth of 1 percentage point. The mortgages in this week’s survey had an average total of 0.35 discount and origination points. One year ago, the mortgage index was 5.12 percent; four weeks ago, it was 5.08 percent.

Results of Bankrate.com’s May 4, 2011, weekly national survey of large lenders and the effect on monthly payments for a $165,000 loan:

The adjustable rates fell more than expected this week because one of the lenders surveyed by Bankrate.com revamped its line of mortgage products.

After dropping for four weeks in a row, fixed rates have reached their lowest since Bankrate’s Dec. 1 survey, when the benchmark 30-year fixed was 4.71 percent.

“There seems to be a lot of forces coming together to keep rates low,” says Dan Green of Waterstone Mortgage in Cincinnati.

One factor that may contribute to keeping rates low for now is the fear of potential retaliation from terrorist groups after the death of Osama bin Laden. The United States kept its official threat level unchanged after the al-Qaida leader was killed in a U.S. raid in Pakistan this week, but security at many airports and subways was heightened.

While the killing of bin Laden itself did not have a direct and immediate impact on rates, the threat of potential retaliation is likely to affect rates, Green says.

“Any unexpected event, especially terrorism threats, tends to have a very deep impact on rates,” Green says. “It’s bad for the stock markets and good for the bond markets,” and that normally leads to lower rates.

That’s because during times of political uncertainty, nervous investors tend to pull money out of riskier investments, such as the stock market, and seek safer investments such as Treasury bonds. The higher demand for bonds causes yields to drop. Mortgage rates normally follow bond yields.

Another international event that may influence mortgage rates in the United States is the Greek debt crisis, Green says.

“To me, the Greece story is having the biggest impact,” in driving investors into the U.S. bond market, he says.

Greece received a bailout of $160 billion last year but continues to struggle with its debt, which represents about 150 percent of its gross domestic product.

Ireland and Portugal also are in deep financial trouble.

While the U.S. economy is bad, the U.S. debt is still perceived as a much safer investment than the debt of some European countries, Findlay says.

“When you are swimming from a shark you don’t have to be the fastest swimmer,” Findlay says. “You just have to be faster than the guy next to you. As bad as the U.S. economy is performing, it is still performing better than the Greek economy.”

Michael Moskowitz, president of Equity Now in New York, says the main driver for the near-record low rates is the bad economy.

“There is no great news from anywhere,” he says. “People are realizing the stimulus didn’t do as much as they were hoping for. Combine that with gas prices going up; residential real estate still in decline and that puts everybody on a somber mood.”

The GDP growth rate, which is one of the most important indicators of economic health, was released last week showing the rate slowed in the last quarter to 1.8 percent compared to the 3.1 percent annual growth rate seen in the fourth quarter of 2010.

Moskowitz says he he expects rates to remain low in the short term, but it’s prudent to lock a low rate now.

“Friday’s employment figures are going to be telling and could impact rates,” he says. “I think the numbers that are coming out for April will be disappointing, but if they are better than we expect, it could bounce rates up. So don’t play the market.”

“It’s a good idea to lock,” he says. “We are just one announcement away for rates to rise.”