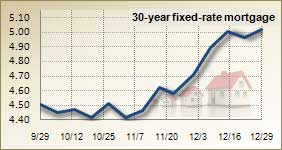 It was a quiet week for mortgage interest rates as lenders, loan brokers and borrowers indulged in holiday festivities and year-end vacations a world away from the daily turmoil of financial markets.

The benchmark 30-year, fixed-rate mortgage rose 6 basis points this week, to 5.02 percent, according to the Bankrate.com national survey of large lenders. A basis point is one-hundredth of 1 percentage point. The mortgages in this week’s survey had an average total of 0.44 discount and origination points.

No news is supposed to be good news, and indeed, there wasn’t much in the way of major announcements on the financial calendar in the final week of the year, says Fred Arnold, a loan originator and branch manager at American Pacific Mortgage Corp. in Roseville, Calif.

Perhaps the only significant announcement was the National Association of Realtors’ report that existing-home sales increased to a seasonally adjusted, annualized rate of 4.68 million units in November. That was an improvement compared to October but still far fewer sales than the 5 million-plus pace that would indicate a healthy housing market.

Meanwhile, rate watchers have turned their attention to January 2011, which could see a continuation of what Arnold described as the “yin and yang” of economic news that characterized much of December 2010. On one hand, retail sales, corporate profits and consumer spending appear to have strengthened. On the other hand, the debt crisis in Europe, particularly in Ireland, has yet to be resolved.

“The first quarter of the year will be the story of the consumer on one end slowly warming up the economy, and a flight to quality (investments) on the other end because of challenges that Europe is going to have,” Arnold says.

Arnold’s advice for prospective home loan borrowers is to lock in an interest rate and press for a promise of an advantageous compromise if rates drop during the lock period.

“Lock in today for 60 days, if you can. And ask your lender, if the rate goes down a quarter-percent or more, can they meet you halfway or more,” he says. “It’s better to have a bird in the hand than two in the bush because interest rates rocket up and may take a long time to parachute down. And we aren’t in a downward environment right now.”