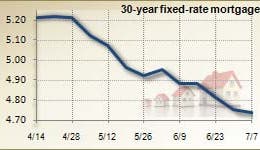 A key mortgage rate fell to another modern-day low this week, as a refinancing boomlet took hold.

The benchmark 30-year fixed-rate mortgage fell 1 basis point this week, to 4.74 percent, according to the Bankrate.com national survey of large lenders. A basis point is one-hundredth of 1 percentage point. The mortgages in this week’s survey had an average total of 0.39 discount and origination points. One year ago, the mortgage index was 5.59 percent; four weeks ago, it was 4.88 percent.

Results of Bankrate.com’s July 7, 2010 weekly national survey of large lenders and the effect on monthly payments for a $165,000 loan:

This time last year, 30-year fixed mortgage rates were in the middle of a three-month period when they stayed above 5.5 percent. And now, almost absurdly, some of those borrowers are in position to refinance.

“Now you can get people from the five-and-a-halfs,” says Michael Moskowitz, president of Equity Now, a direct mortgage lender based in New York City. Until two or three weeks ago, there was hardly anyone left who could profitably refinance. Now the refinance market is “enlivening,” Moskowitz says.

The Mortgage Bankers Association says refinance applications climbed 9.2 percent last week, and were at their highest level since May 2009. Purchase applications fell again, and have declined steadily since the expiration of the homebuyer tax credit at the end of April.

“We have 19 million vacant housing units in the United States, and I’m afraid it’s going to put some more of them on the market,” Jones says.

The uncertain job market dissuades people from buying homes. And without a steady income in the last two years, it’s harder to qualify for a refinance — that is, if the home’s value supports a refi. So even with record-low mortgage rates, there just aren’t a lot of borrowers.

For mortgage lenders, “it’s like we’ve got this beautiful buffet of food laid out, and nobody’s coming up to eat it,” says Christopher Cruise, a trainer for LoanOfficerSchool.com. He says steady jobs are more important to mortgage borrowers than low rates.

“If borrowers could see a light at the end of the tunnel, and could see 7 percent rates and they had steady jobs, they would rather have that than 4.5 percent rates” in the current job market, Cruise says. “As much as people like low rates, they’ve got to have steady work.”

Jones says he has a suggestion for stimulating the economy: “If I had it my way, we would allow anyone who’s current on their loan today to refinance at current market rates, even if they’re under water, he says, calling it “a great way to get money in the pockets for people to recover from this economy.”