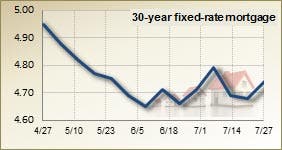 Mortgage rates inched up this week as investors were spooked by political gridlock over how to raise the national debt ceiling and cut the deficit.

The benchmark 30-year fixed-rate mortgage rose 6 basis points this week, to 4.74 percent, according to the Bankrate.com national survey of large lenders. A basis point is one-hundredth of 1 percentage point. The mortgages in this week’s survey had an average total of 0.35 discount and origination points. One year ago, the mortgage index was 4.71 percent; four weeks ago, it was 4.71 percent, too.

Industry analysts have made it clear that if the United States defaults and the national debt is downgraded, mortgage rates could spike immediately. But the uncertainty over what Congress will decide over the next few days has already started to shake the mortgage world, as investors question if it’s still safe to invest in U.S. bonds.

Results of Bankrate.com’s July 27, 2011, weekly national survey of large lenders and the effect on monthly payments for a $165,000 loan:
What would the monthly payment be for you? Use Bankrate’s mortgage calculator to find out.

“The debt ceiling debates have thrown mortgage markets for a loop,” says Dan Green of Waterstone Mortgage in Cincinnati. “Rates are moving wildly and without clear pattern.”

Even if Congress reaches a deal by the Aug. 2 deadline and eventually raises the debt ceiling, rates will continue to rise because a higher debt ceiling would trigger further devaluation of the dollar, he says.

With six days left before the United States faces the potential catastrophic debt default, the value of the dollar has already slid to record lows compared to other currencies.

Some mortgage analysts think the debt storm might be short-lived. They expect Democrats and Republicans to reach a last-minute resolution to get the debt crisis under control, and investors will regain confidence in U.S. debt a few weeks after that.

“Inflation is the biggest concern for rates,” he says. “At some point inflation will affect interest rates. It could be two or six months, but eventually rates will rise.”

Should you wait or lock now?

Those who are on the fence — trying to decide whether they should refinance now or wait until the rates stabilize — shouldn’t take the chance, Nunziata says.

While rates did edge higher this week and are expected to continue to rise until the market shakes up the impact of the debt debate, they remain at historical low levels, says Mona Marimow, senior vice president of marketing for LendingTree.com.

If you are able to lock in a rate now it’s probably a wise decision, she says: “I do think that people who don’t take action are going to look back at the market six months from now and regret it.”