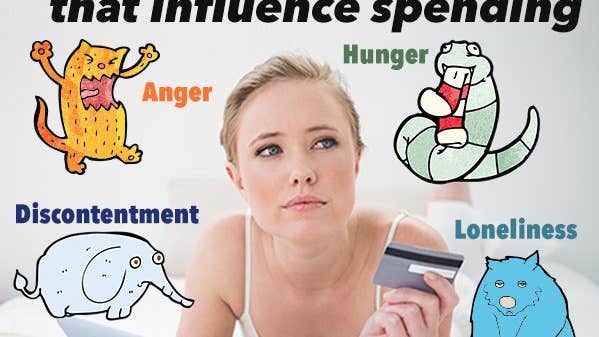 There are three money rules that I seem to cite more than any of the others: Don’t shop angry, don’t shop sad and don’t shop hungry. These rules come up often because most of us have succumbed to retail therapy at one point or another.

Research from Ebates, a website that offers cash back for online shopping, found that more than 60 percent of women and close to 40 percent of men spend money to improve their moods.

Does it work? Maybe in the short term, but it’s like a high in that once it wears off, the feelings you were trying to repress come back, often tenfold.

But it’s not easy to keep emotions out of spending, says Peter Noel Murray, a New York-based psychologist who studies this. “All decisions and all behavior is, to some extent — and when you get into consumer products, to a great extent — emotionally driven,” Murray says.

“But we’re not conscious of these emotions. Being in touch with that, and aware of what is happening inside of your brain, can be liberating and help you make better decisions as a consumer.”

Here, the four emotions (and one state of mind) that could influence you to spend:

You’ve heard you shouldn’t go to the grocery store hungry. But that advice extends to other stores as well, says April Benson, a New York-based psychologist who specializes in overshopping.

“Hunger is an anticipatory state that wants satisfaction, and you may confuse what will satisfy it,” she says. This is particularly true if you’re on a diet, she says, because you may transfer the desire to feed yourself from food to “stuff.”

Repeat after me: The sales rep is not your friend. He or she is there to tell you what you want to hear so that you’ll swipe your credit card. So, although you may get an immediate boost by being told that dress was made for you, it’s not going to fill your deeper need for connection.

“Things can never satisfy your need for people,” says Benson. “You can never get enough of what you don’t really need, and if what you need is the company of others to feel as though you belong, no matter what you buy, it’s not going to do it.”

A large percentage of excess shopping is related to what Benson calls the “revenge motive,” meaning you want to get even. This is running up a credit card bill to get back at your penny-pinching spouse, but it’s also the result of being mad at yourself.

“If you’re angry at yourself, beating yourself up, in order to relieve that bad internal feeling, you do something to try to anesthetize it,” says Benson. In other words, you shop.

Murray doesn’t focus on individual emotions in his research, but rather how the consumer mind goes from the motivation of wanting to buy or own something to making the extra effort to actually buy it. What he’s found is that the motivation is often cognitive — you want to buy a dress for a party — but once we are in the retail environment, the mind shifts to an emotional state.

Is this an emotion? Maybe not. But it’s worth addressing anyway. Because here’s what happens: You sit down after work, have a glass of wine, and scroll through the promotional emails in your inbox, or visit a few of your favorite stores online. Next thing you know, the wine has kicked in and your wallet is feeling just a wee bit looser.

Alcohol lowers your inhibitions — there’s a reason why more stores are offering drinks and snacks to shoppers — and you’re much more likely to make mindless purchases.