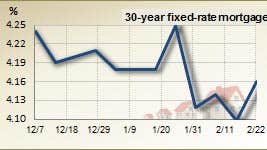 The benchmark 30-year fixed-rate mortgage inched up this week to 4.16 percent from 4.1 percent, according to the Bankrate.com national survey of large lenders. The mortgages in this week’s survey had an average total of 0.39 discount and origination points. A year ago, the mortgage rate index was 5.09 percent; four weeks ago, it was 4.25 percent. The previous week’s rate of 4.1 percent was the record low in the 26-year history of Bankrate’s weekly rate survey.

The latest weekly survey comes as the sputtering housing market shows signs of life. Sales of existing homes grew at the fastest rate in nearly two years last month, according to a report released Wednesday by the National Association of Realtors.

Home sales increased 4.3 percent over December to a seasonally adjusted annual pace of 4.57 million. That’s still well below the traditionally healthy pace of 6 million units, but the gain, the third in four months, bodes well for the upcoming spring buying season.

(Caveat alert: Buried in NAR’s report is the steep revision of December’s home sales figure from a 5 percent month-over-month increase to a 0.5 percent drop.)

“For good borrowers, these are the best of times,” says Mark Zandi, chief economist of Moody’s Analytics. “Rates are low; prices are low. Single-family housing is about as affordable as it has been.”

And for current homeowners, they have the enviable choice between two fixed-rate loans that offer rates unmatched in decades. While headlines focus on the widely popular 30-year fixed loan rate, its 15-year cousin is getting attention from homeowners who want to pad their wallets over the long term.

Cut that term in half

The share of borrowers refinancing into a 15-year fixed mortgage from a 30-year loan is at its highest point in eight years, according to a report released last week from Freddie Mac. And why not, with rates flirting with 3 percent?

“We have one (refi) closing next week. They got 2.875 percent on a 15-year,” says Pava Leyrer, president of Heritage National Mortgage in Grandville, Mich. “Oh my God, that’s a good rate. You can’t ride the bus for that kind of money.”

Homeowners who cut the length of their mortgage from 30 years to 15 can save tens of thousands of dollars in interest over the life of the loan, depending on the difference in interest rates and the remaining term, says John Stearns, a mortgage broker with American Fidelity Mortgage Services in Milwaukee.

Of course, a shorter term often means a bigger monthly payment, so borrowers with steady and secure incomes are the best candidates for a 15-year mortgage.

“I’ve had people who worked on commission come back to refinance out of a 15-year back into a 30-year because their income slowed down,” Leyrer says.

No need to act now

Fear not if you don’t feel ready to refinance or buy, or if you don’t qualify. Mortgage rates likely won’t move too much over the next year, says Paul Edelstein, director of financial economics at IHS Global Insight.

“Housing is really the laggard in the economic recovery,” he says, “so the (Federal Reserve) will continue to prop up the mortgage market to induce people to buy houses.”

The central bank’s policymaking committee promised last month to maintain its benchmark interest rate near zero until late 2014, making borrowing cheap for consumers (and for businesses). The Fed also continues to buy longer-term Treasuries and mortgage-backed securities to help keep a lid on mortgage rates.

Ancillary factors such as Europe’s ongoing debt saga may flick rates up or down several basis points as investors hedge risk by buying safer investments such as Treasuries. (The 30-year mortgage rate often tracks the yield on the 10-year Treasury bond.)

But the situation overseas would need to unravel for mortgage rates to dive further, Zandi says. The more likely scenario is slow growth in the economy and a crawl upward in rates.

“They will drift higher. They will be a little higher a year from now and definitely much higher two years from now,” he says.