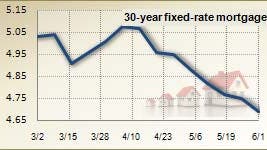 Mortgage rates took another dip this week amid an avalanche of bad economic news in the United States and abroad.

The benchmark 30-year fixed-rate mortgage fell 6 basis points this week, to 4.69 percent, according to the Bankrate.com national survey of large lenders. A basis point is one-hundredth of 1 percentage point. The mortgages in this week’s survey had an average total of 0.39 discount and origination points. One year ago, the mortgage index was 4.95 percent; four weeks ago, it was 4.88 percent.

Results of Bankrate.com’s June 1, 2011, weekly national survey of large lenders and the effect on monthly payments for a $165,000 loan:

Two rate records were set this week. This is the first time since 2003 that the 30-year fixed rate has dropped for eight consecutive weeks, according to Bankrate’s survey. More recently, mortgage rates fell seven weeks in a row in late 2008, after Lehman Brothers filed for bankruptcy and the U.S. financial system was on the verge of collapse.

This is the lowest rate on the 5/1 adjustable since Bankrate started tracking 5/1 ARMs in January 2005. The rate has dropped for five weeks in a row, according to Bankrate’s survey. Before the initial decline in early May, the lowest it had reached was 3.57 percent on Nov. 3, 2010.

Mortgage experts say the slew of negative economic reports released this week has helped keep rates near record lows. In the 26-year history of Bankrate’s weekly survey, the record low rate for the 30-year fixed was 4.42 percent. It fell that low twice last autumn.

“Based on the housing data and all the other reports we are seeing right now, I think rates will remain low during the next couple of weeks,” says Rob Nunziata, president of FBC Mortgage in Orlando, Fla.

Home prices hit a new low in March and are back to mid-2002 levels, according to the Standard & Poor’s Case-Shiller house price data released Tuesday. The closely watched home-price index shows that prices fell 4.2 percent across the nation in the first three months of the year, after a 3.6 percent decline in the fourth quarter of 2010. According to the index, home prices have fallen for eight months in a row and are down 33.1 percent from the peak in July 2006.

“This month’s report is marked by the confirmation of a double dip in home prices across much of the nation,” says David M. Blitzer, chairman of the index committee at S&P. “Home prices continue on their downward spiral with no relief in sight.”

Blitzer says the rebound in prices seen in 2009 and 2010 was mostly due to the first-time homebuyer tax credit.

“Excluding the results of that policy, there has been no recovery or even stabilization in home prices during or after the recent recession,” he says.

The jobs market also offered little hope after payroll giant Automatic Data Processing Inc., or ADP, released a much weaker-than-expected private-sector employment report Wednesday. Private-sector jobs in the United States increased by 38,000 in March, when economists were expecting a gain of 175,000 to 190,000 jobs.

The U.S. Labor Department will release employment numbers Friday, but investors have already started reacting to the weak job figures.

After the ADP’s report was released, the demand for U.S. bonds, which are considered a safer investment compared to stocks, increased. Higher demand translates into lower yields, and normally into lower mortgage rates. On Wednesday morning, bond yields on 10-year Treasury notes fell to 2.97 percent, the lowest level this year.

The series of negative news is causing consumers to lose confidence in the much-needed economic rebound. The Conference Board’s Consumer Confidence index, released Tuesday, fell to a six-month low of 60.8. That’s far from a reading of 90, which normally indicates a healthy economy.

Combine all these disappointing economic reports with the debt crisis in Greece, and you have the perfect recipe for lower rates, says Cameron Findlay, chief economist for LendingTree. That’s because it causes nervous investors to pull out of riskier investments and into the U.S. bond market, he says.

To get an idea of how investors perceive the Greek debt compared to the U.S. debt, Findlay says, you have to look at Greece’s bond yields. The 10-year note in Greece is trading with a yield of more than 16 percent, up from about 10 percent in February, he says. Generally, the higher the yield, the higher the risk, he says. In early February, the U.S. 10-year note reached 3.47 percent and has declined below 3 percent this week.

“That’s certainly causing demand for U.S. debt to increase,” he says. “And that helps mortgage rates.”