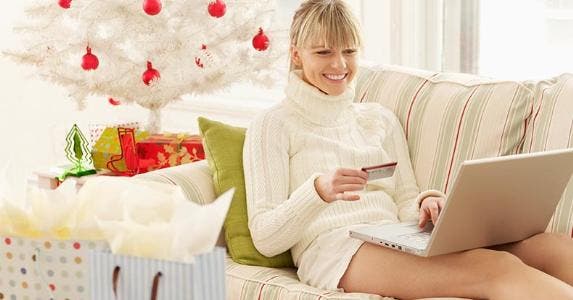 This holiday season, consider giving yourself a present that always fits and doesn’t require wrapping. What is this fabulous gift you’re sure to love? It’s a new year that’s free of lingering credit card debt.

For many, staying out of debt at this time of year is about as easy as losing 10 pounds. But it’s actually quite simple: Be aware of how much you owe. Read your credit card statements. Keep a budget.

Most of all, know when it’s time to keep those credit cards at home.

Still unclear? Here are five signs you may need to cool it with the credit cards this holiday season.

Don’t know how much you can afford to spend for the holidays? Put down that credit card and back away slowly.

A lot of people shop with an attitude of, “If I want it, I buy it,” says Mark Foster, director of education for Credit Counseling of Arkansas. “That’s a recipe for disaster.”

Instead, take a few minutes to figure out what you can safely spend this holiday season, on everything from stamps to decorations to gifts. The amount may be smaller than you’d hoped, but so what?

Among “the people that we see who have the highest credit scores — 750 and above — we do see consistent behaviors in them that drive those scores,” says Anthony Sprauve, a spokesman for credit scoring giant FICO. Things such as “not overspending, not running up their credit card bills.”

If you don’t know how much credit you’ve already burned through, it’s time to stop and check, says Todd Mark, a former vice president of the Consumer Credit Counseling Service of Greater Dallas, in Texas.

“If someone asks you, ‘How much have you spent so far?’ and you can’t tell,” Mark says, “there’s a good chance you’re shopping beyond your budget.”

“That probably tells you you’re not paying close enough attention,” Sprauve says. Think of that credit card balance as an early warning system. It can signal you to leave the cards at home, he says.

3. Your credit score is at risk

How much is too much?

The higher the balance in relation to your credit line, the more your score can suffer, Sprauve says. A debt-to-credit ratio of less than 20 percent is “the sweet spot.”

FICO used to recommend using no more than 10 percent of available credit. It now considers anywhere below 20 percent a healthy target.

“Within the score, there is a very small difference between 10 percent and 20 percent,” says Sprauve. And “20 percent is much more realistic for the average person.”

4. You’ve spent more than you can pay off

When you’ve spent more than you can pay off, “that’s a time to stop,” Mark says. Realize “this isn’t making sense.”

The thrill you might get from shopping at holiday time is never worth the pain when your bill arrives in that third or fourth week of January, he says. “You’re setting yourself up for a financial crisis.”

Here are a few more signs that you won’t be able to pay off that bill in January.

Some consumers are in debt before the holidays even arrive. If that’s the case, then “the last thing you want to do is say, ‘Let’s have one last hurrah, and we’ll deal with it in January,'” Mark says.

5. You don’t have an emergency fund

Face it: Life is full of emergencies. And they usually come with a price tag.

So having a little cash cushion is not only smart, it’s necessary.

Before you invest even a penny, “financial planners want to make sure the client has three to six months’ of readily available cash to use for emergencies,” says Andy Byron, financial adviser and partner with HC Financial Advisors in Lafayette, California.

In that case, Byron advises, do what shoppers did a generation ago: Use cash.