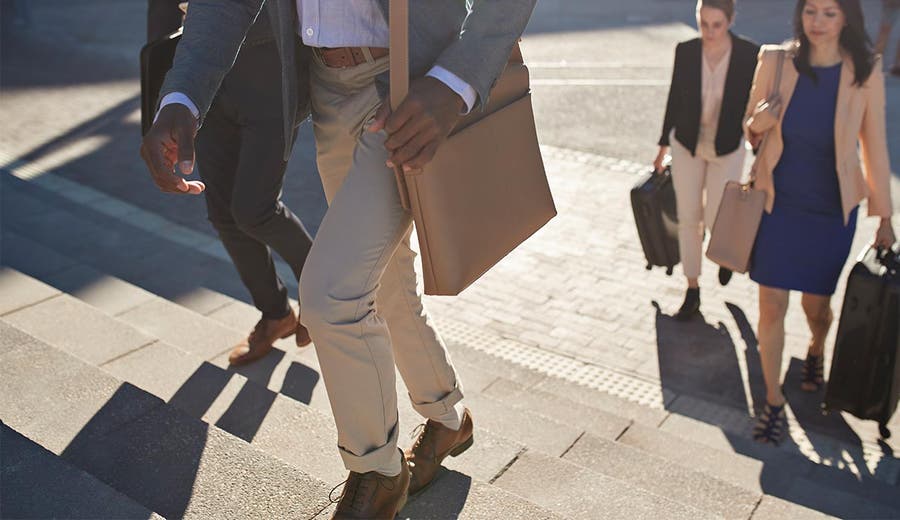 One in 5 adults has no financial regrets, a new Bankrate survey finds. The rest wouldn’t mind hopping in a time machine.

In November, she was diagnosed with Stage 4 breast cancer, meaning that it had spread throughout her body. She had no savings and barely any money in her checking account.

“I was so focused on trying to achieve my goals,” says Shenave, a business owner in Houston. She had poured all her money into her husband’s company and her real estate business.

Although her insurance is covering her medical bills, Shenave says she’s had to turn to family to help remain financially afloat.

Stashing cash in a money market account can protect you during a medical emergency. If you have no savings and face a crisis, turn to a personal loan before you consider using a high-interest credit card.

Sixteen percent of Americans say their biggest financial regret is not saving enough for emergency expenses, according to our survey.

But even more of us feel bad about our failed efforts to save for retirement.

That guilt appears to be growing. Twenty-two percent say that’s their worst financial blunder, up from 18 percent last May. 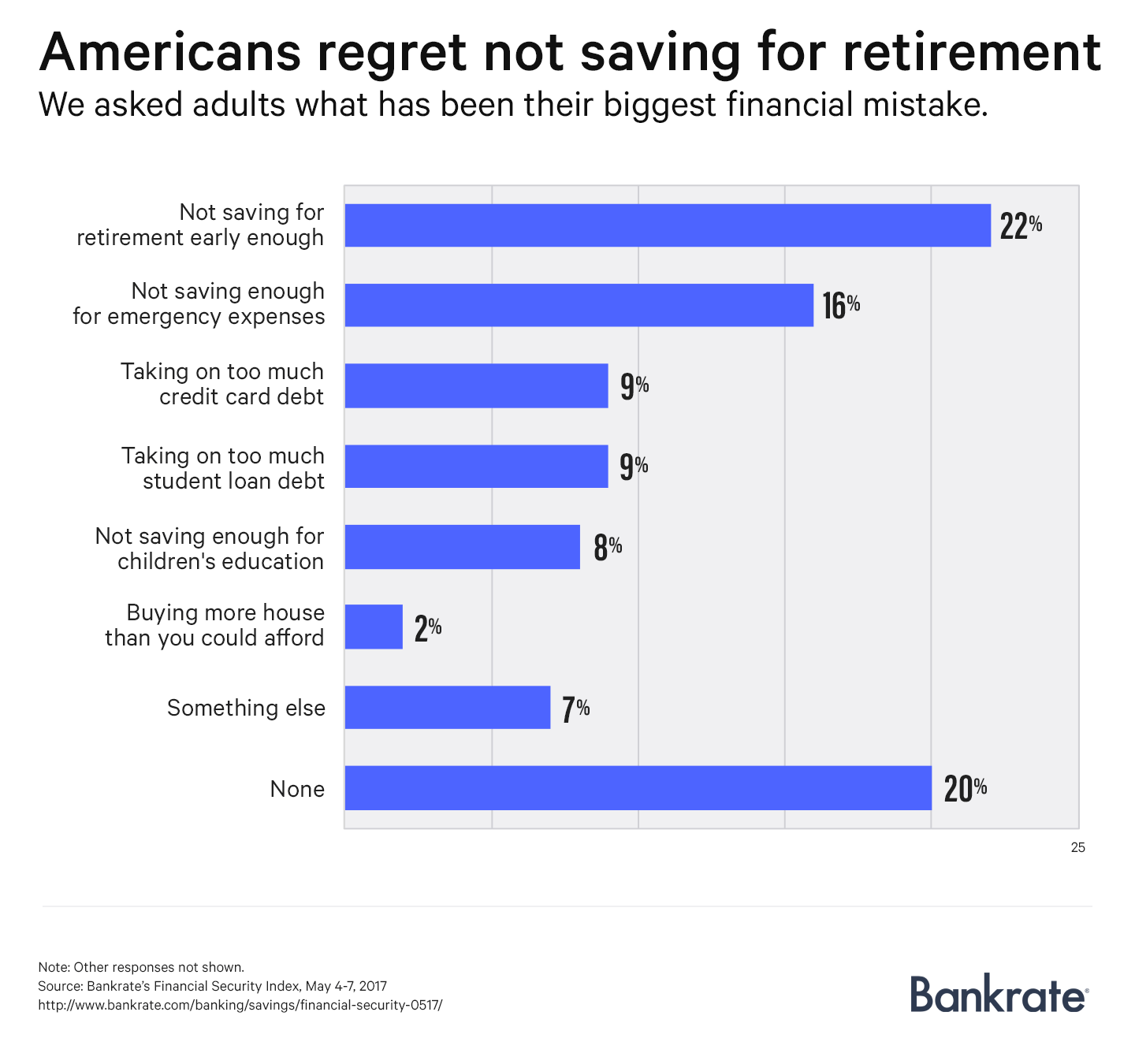 “The burden of saving for retirement has shifted in recent years from employers to individuals. As a result, many Americans have either been unable or unwilling to save sufficiently for retirement,” says Mark Hamrick, Bankrate’s senior economic analyst and Washington bureau chief.

“As with any savings effort, planning for retirement can be viewed under the banner of paying yourself first. If you are a full-time employee, try to take advantage to the fullest extent possible participation in a 401(k) plan,” Hamrick says.

Not sure of the impact? This calculator will show you how increasing contributions today can improve your retirement income tomorrow.

A late start on retirement savings

Retirement savings concerns increase with age and taper off as Americans exit the workforce. Thirty-seven percent of adults ages 50 to 64 say not saving for retirement early enough is their biggest financial regret. Twenty-six percent of those over 64 agree.

Delaying the decision to start saving for retirement is the top financial regret for males and females, blacks and whites.

Among those with second thoughts about their financial decisions, it’s also the biggest concern for people in each of the income brackets above $30,000 annually that Bankrate surveyed.

Bill Losey, owner and president of Bill Losey Retirement Solutions in Greenwich, New York, says it’s common for people across the income spectrum to be afraid of outliving their savings. Even wealthy individuals can feel financially strapped if their expenses exceed their income. 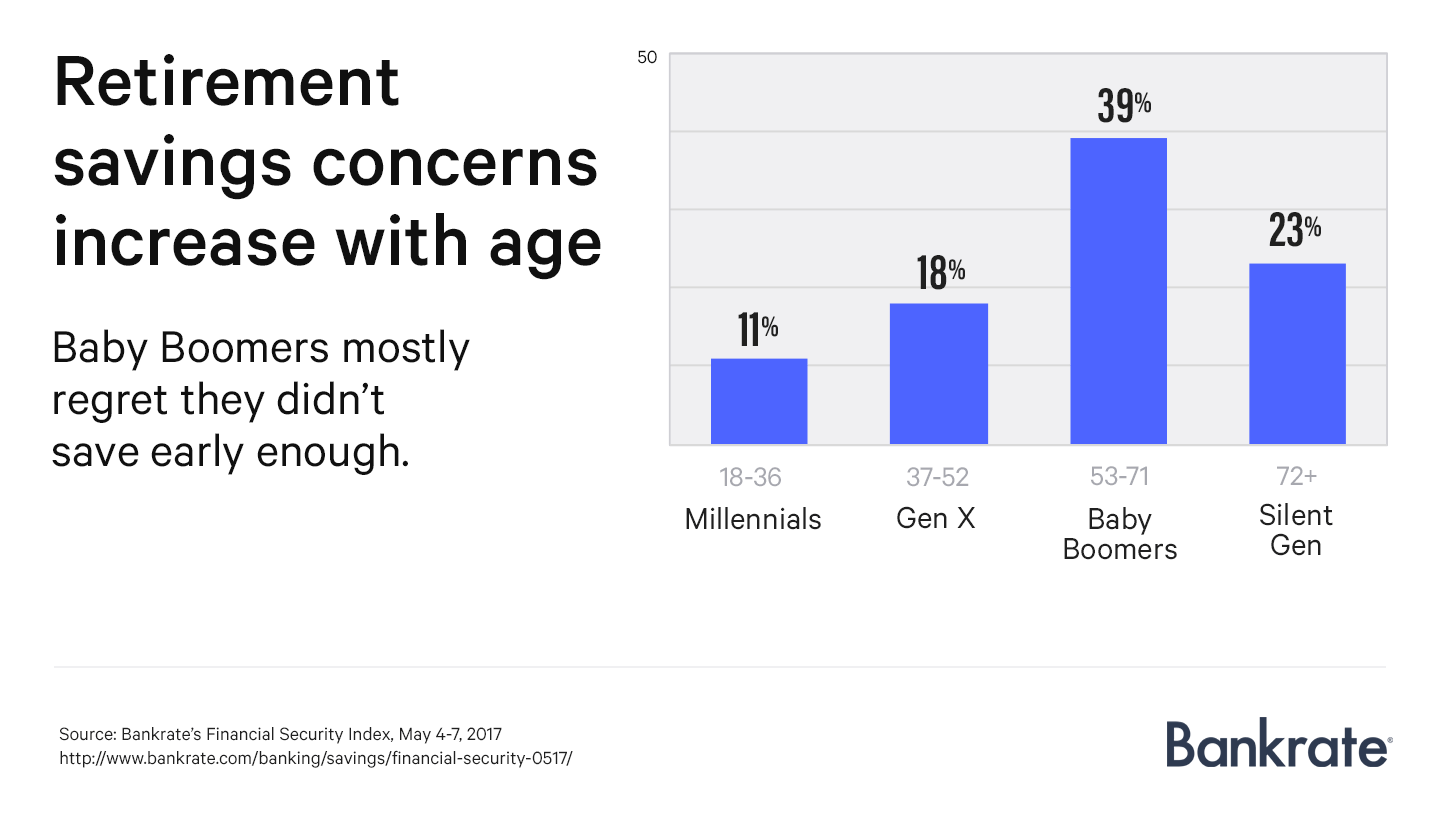 Not all bad news

There’s room for improvement when it comes to saving for the future. But nearly a quarter of Americans think they’re on the right track.

When asked how they feel about the amount of money they’ve saved, 23 percent of survey respondents say they’re more comfortable today than they were a year ago, up from 21 percent when we asked the same question in April.

More than half of 18- to 29-year-olds feel almost the same about their savings as they did 12 months ago. They’re also more likely to regret taking on too much student loan debt.

Anyone feeling stagnant can fix that by acknowledging their challenges and making adjustments in order to meet their financial goals. Start by having a portion of your paycheck automatically deposited into a savings account. As you get more comfortable saving, increase the deposit amount.

“I think a lot of us are so stressed and frustrated by our financial situation that we ignore it,” says Autumn Campbell, a financial planning resident at Upperline Financial Planning in New Orleans. “Facing our uncertainty or our fears on that I think is the first step and realizing, OK I need to change and this is what I need to change to be able to be where I want.”

Bankrate’s Financial Security Index fell for the second straight month in May to 104.0 from 104.8 in April. The index, which hit its record high of 106.5 in March, measures American’s financial well-being in five areas: comfort with savings, comfort with debt, net worth, job security and overall financial situation. 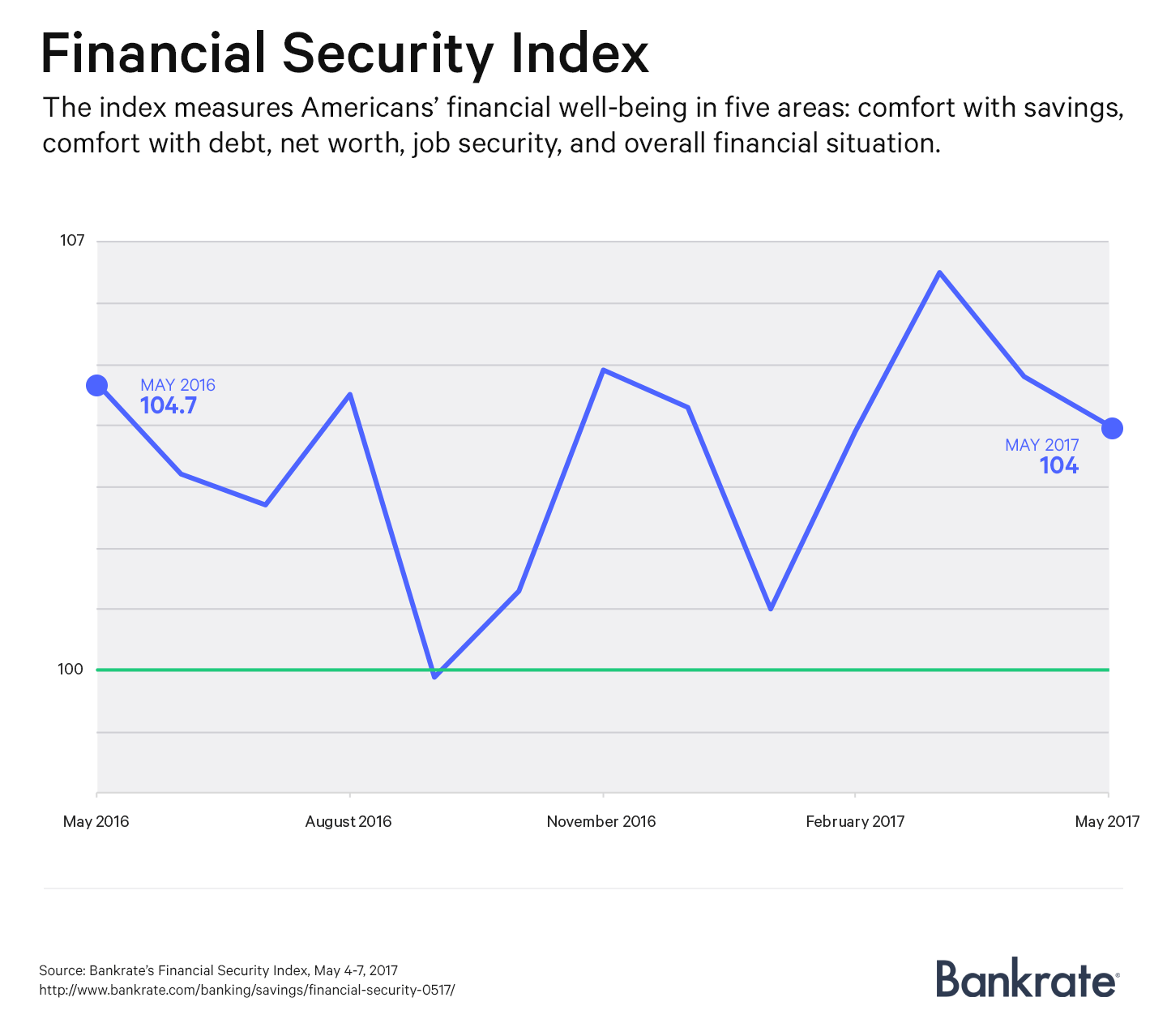 Readings on all measures of financial security showed improvement from one year ago. And for the second time in three months, our results indicate that Americans feel better about their savings. These are the only two times consumers have said their savings comfort has improved since Bankrate began polling this question in December 2010.

While that suggests women are becoming more aware of where they should be financially, Anne Spinks, owner of Nevotti Spinks Asset Management in Conroe, Texas, says it doesn’t mean they’re making good choices.

“If everybody is just putting their money in a 0 percent savings account, they’re not seeing the appreciation that they can see with compounding interest and a nice diversified portfolio,” Spinks says. “I’m glad that women feel better, but do they understand everything? Do they have enough information to make smart decisions?”

The survey was conducted by Princeton Survey Research Associates International. PSRAI obtained telephone interviews with a nationally representative sample of 1,001 adults living in the continental United States. Interviews were conducted May 4-7. The margin of sampling error for the complete set of weighted data is plus or minus 4.0 percentage points.