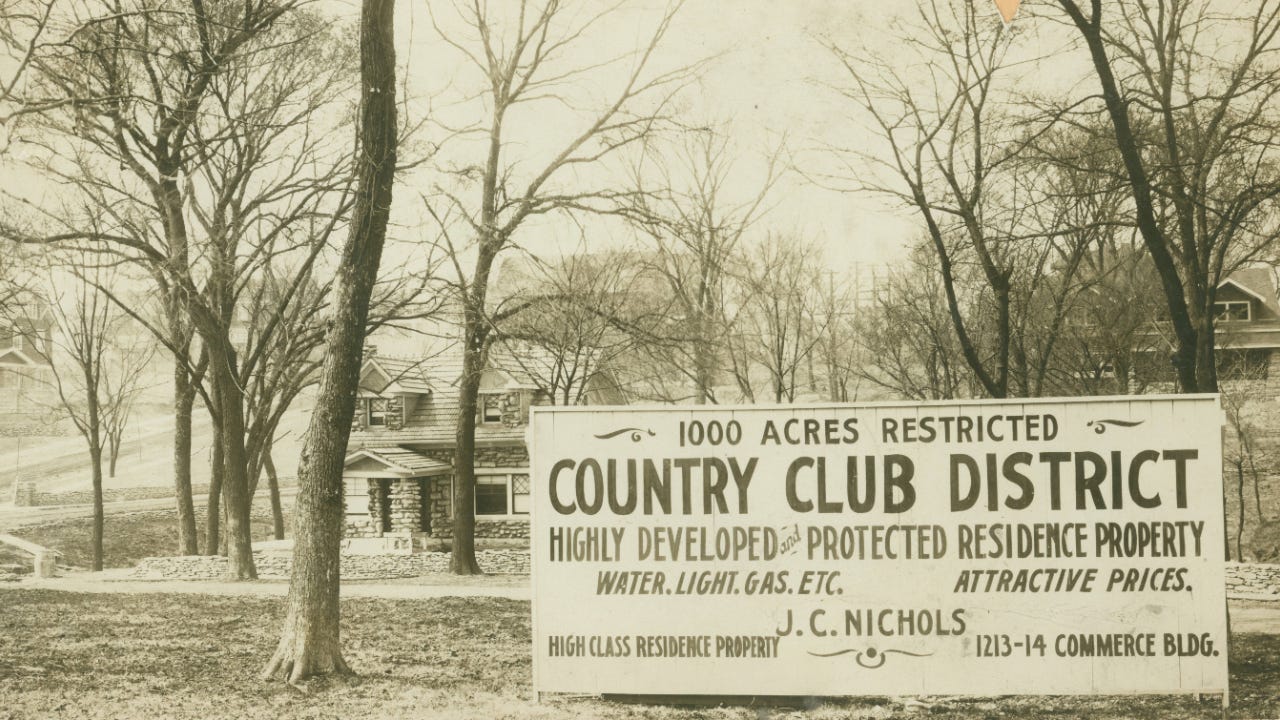 Courtesy of The State Historical Society of Missouri

Here’s the thing about houses: Many of them are very old. If a property has good bones, it can be around in more or less the same condition for a hundred years or more. But older homes may also have hidden skeletons in their proverbial (if not literal) closets

A house and its associated documents — deeds, titles, easement contracts, etc. — are genuine historical records, and they can reveal how societal values and norms have changed over time. In America, home deeds often highlight racism in the history of real estate. For decades, minorities including Black, Asian and Jewish people, among others, were officially barred from living in specific homes and neighborhoods. These conditions, known as restrictive covenants, were written into the deeds for individual properties or subdivision developments as well as many HOA bylaws.

The covenants, also known as deed restrictions, don’t just deal with race. Many developments continue to have covenants that dictate things like what color you can paint the exterior of your house or what sort of structures can be built on your property — but this article focuses on the racial restrictions only.

Deeds and other original property documents can be extremely difficult to amend, so if you’re living in an older home, especially one that was built in the 20th century before the Fair Housing Act was passed in 1968, it’s very possible that your deed still contains language that prohibits certain groups of people from living where you do. It might even say that you yourself aren’t supposed to live there.

Many people think that racially restrictive covenants sprang into existence in the post-World War II suburbanization boom, but they’ve actually been around for quite a bit longer.

“In Chicago at least, it was well before the suburbanization movement. This was during the Great Migration; it was a way of keeping people corralled,” said Rob Rose, executive director of the Cook County Land Bank Authority in Chicago. He explained that as Black people moved out of the South, their new Northern neighbors became worried about what increasing diversity would mean for their communities.

“If you were to talk to people of that era, they looked at it as protecting their home values and their neighborhoods,” he said.

Many homeowners thought that diversity would lower property values and make neighborhoods more dangerous and less desirable. Later on, this view was codified through redlining, an official policy that made it more difficult, or often impossible, to secure a federally-insured mortgage in neighborhoods that had significant nonwhite populations.

“After the FHA put out those guidelines in the mid-late ’30s, pretty much every subdivision, every new subdivision, had racial restrictions,” said Carol M. Rose — no relation to Rob — a law professor emerita at Yale Law School and the University of Arizona Law College, and co-author of “Saving the Neighborhood: Racially Restrictive Covenants, Law, and Social Norms.”

Many developers included racially restrictive covenants in new subdivisions, barring minorities from their neighborhoods because they thought doing so would boost property values. In some existing neighborhoods, residents retroactively added similar restrictions with community-wide petitions.

It was just one of many forces keeping Black people and other minorities from owning homes, Rob Rose said.

“It had nothing to do with whether you could afford it,” he said. “You were in a lower caste. This is how you were reminded.”

Racially restrictive covenants lost their power gradually after World War II. In 1948 the Supreme Court case Shelly v. Kraemer declared them unenforceable in court. However, many developers continued including them in new construction deeds anyway, and they were still technically legal. When the Fair Housing Act passed in 1968, racially restrictive covenants were officially made illegal, but they remained on paper like many other racist laws and policies that were later struck down, but which still exist in the statute books.

While they were in force, the covenants upheld the idea that diversity hurts a neighborhood’s property values, and that legacy continues to affect housing today. But, Carol M. Rose said, the covenants themselves are now more an undignified relic and a nuisance for title insurers.

“I think it’s mostly a kind of dignitary matter or a matter of honor. You don’t want to have this kind of thing in your property,” she said.

Although, not everyone agrees. Rob Rose, who is Black, said that if he were living in a house with a deed that had a racially restrictive covenant, he would want to highlight it.

“I’d want to find the original deed, frame it and have it in the house to show the history,” he said.

Whether or not a homeowner wants to put that kind of history on display is a personal choice, but Carol M. Rose said that although the covenants are no longer enforceable, they do still sometimes make things complicated for homebuyers even now.

“On the buyer side, you can run into somebody who doesn’t know any better,” she said, and recalled a case in the early 2000s in the Carolinas where a White property owner told a Black buyer he couldn’t sell to her because of a covenant in his deed.

Racial covenants can also make things complicated for title insurance companies, because it is their duty to report any conditions that could affect a homeowner’s right to live in their new property, even if it’s no longer legally enforceable.

“Title insurers have an awful time with them,” Carol M. Rose said.

What homeowners can do about them

It is possible to alter your deed, but it’s usually not easy or cheap. Unfortunately for a lot of homeowners, that means it’s ultimately just not worth the effort.

If you want to find out about the conditions in your property’s deed, the first thing you’d have to do is obtain a copy of the document from your municipality. But, Carol M. Rose cautioned, if you find you have a restrictive covenant that you want to get rid of, it can be extremely difficult.

“That’s an issue for state law. Some states require HOAs to expunge them. One of them is California,” she said. “If you’re not required by law to expunge them, the only way to do it is to go around and get the OK from everyone who is a so-called beneficiary,” she added. “You can’t reject it on your own, just like you can’t reject your neighbor’s easement of view over your property.”

Essentially, she said, there’s a lot of red tape involved, and getting rid of the vestigial deed clauses can cost thousands of dollars.

She also said if there’s no law permitting or requiring the removal of the covenants, other institutions like banks can throw up their own roadblocks to getting the documents amended.

“Banks don’t want anything to change in these deed documents. I actually think that’s one of the reasons we have these things around, because they get collected into larger packages and it seems like it’s not worth it to take the effort,” she said. “I do think that the banks have now, and had for a long time, a role in not letting people get rid of these things.”

Racially restrictive covenants may seem like a quirk of American real estate history, but they are extremely difficult to expunge, even if they’re no longer legal or enforceable. They’re most likely to be removed as a result of state or local laws, but without a legal requirement to get rid of them, it can be tough and expensive for homeowners to do individually.