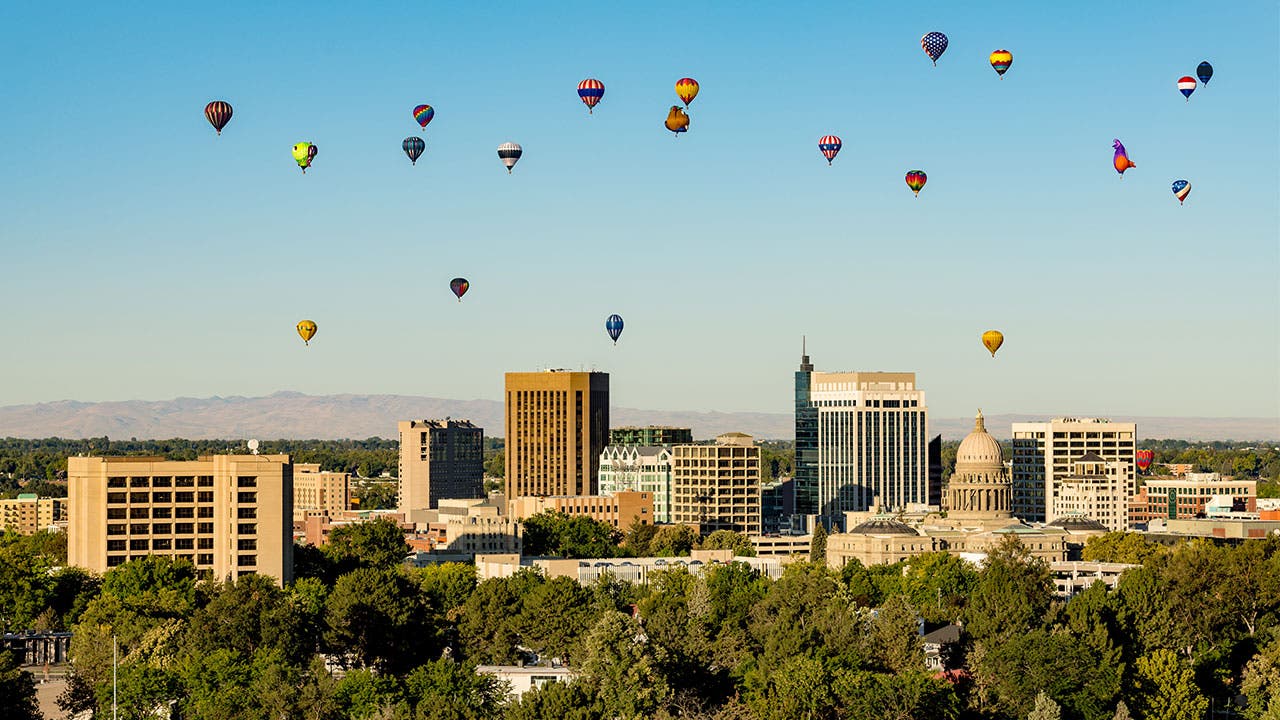 Boise, Idaho, a bustling Northwest city of 227,000 people, is increasingly becoming a favorite destination for West Coasters seeking an affordable place to put down roots. In the past decade, Boise has added 20,000 people to its population, and earlier this year, Forbes named it the fastest-growing metro area in the U.S.

Driven by affordable housing, a more relaxed pace and lower taxes, people from California, Washington and Colorado are cashing out of expensive homes and getting more for their dollar in Boise.

“People are coming here for the lower cost of living, the good schools and the great climate. Parents are realizing that they can move here and one parent doesn’t have to work,” says Michael Turner, a real estate agent at Front Street Brokers in Boise. “They can reduce their work hours and commute times. A lot of people come for lifestyle reasons.”

Cassandra Hammer and her husband, Reed Hammer, are an example of a family who wanted a different way of life. They were living in Orange County, California, and feeling the burden of the high cost of living, which barred them from realizing their financial goals, so they decided to move.

“We visited Austin because we heard it was great, but it wasn’t for us. Then we came out here and we fell in love with it,” says Cassandra.

The couple purchased a 1,300-square-foot home for $200,000 in Kuna, which is part of the Boise City-Nampa metro area, known as Treasure Valley. It’s now the third-largest metro area in the Northwest after Seattle and Portland.  Since moving this year, they’re able to live on Reed’s income as a tattoo artist, so that Cassandra, who was in retail management, can stay home with their newborn son.

“We wanted to be able to own a home and live on one income so I could stay home with our baby. We couldn’t do that in Orange County,” says Cassandra.

The lifestyle in Boise also aligns with their family values, she says. They now have more quality time to invest in activities that are important to them.

“In California, you have to hustle for everything. It was so touch and go. I can’t even imagine having my son there. Now we can focus on our marriage and our family. We’re able to make all that work here,” Cassandra says.

The housing market is strong

Boise has been hot for the best part of the last three years. The median listing price of a home rose from $225,900 in August 2015 to $325,000 in July 2018, according to Realtor.com. Even with the rise, Boise is still one of the most affordable markets in the West.

Tyrell, himself, moved to Boise from Northern California nine years ago, citing a more affordable cost of living as the primary reason.

Houses are selling like hotcakes. Boise broke inventory records in July, with the median age of inventory at just 34 days. This was twice as fast as three years ago, according to Realtor.com.

Gen Xers claim the largest share of new mortgages in Boise, with more than 45 percent of mortgage applications in July, according to Realtor.com. However, baby boomers have a strong presence in Boise, at a rate almost 1.4 times greater than the national average.

“When we look at mortgage applications we look at the age group that’s dominating sales in mortgage originations and in Boise. We’re seeing a higher than average share taken by the 55 and older age group,” says Javier Vivas, director of economic research at Realtor.com. “Generation X and families with older kids, who are looking for space, are another group that’s buying here.”

Although Boise has a diverse economy and a low unemployment rate, job opportunities aren’t necessarily the primary draw. Micron, a large semiconductor manufacturing company, is headquartered there but the biggest employer is the government, which includes a U.S. Air Force Base, Boise State University and the state’s Department of Health and Welfare.

“It’s a place that’s generating a good amount of jobs. But many people who come here aren’t in a hurry to find a job. They’re entrepreneurs or they work remotely. People coming from more expensive states are here for a lifestyle move, not necessarily a career move,” says Turner.

Boise is also luring business owners who want to reduce their operating costs and taxes.

PricePump, founded in 1932 in Sonoma, California, is moving to Boise. The pump manufacturing company can’t afford to keep operations in the Golden State, says CEO Robert Piazza. Wages were a critical component in Piazza’s decision. In California, the living wage for a single person is $14 per hour, according to MIT. Boise’s living wage is $3 less per hour, at $11.

“For me I had to pay people significantly more money to live in this state than I would in other states. That’s fine if my competition is next door to me and I’m doing business within the state only. The problem is my competition is not in California, they’re in more affordable states or out of the country,” says Piazza.

High taxes and wages began to eat into his profits. Ultimately, Piazza said he faced three choices: watch his company slowly go out of business, sell or move. He chose the latter.

“The cost of living in California is just fine if you already live here, but if you’re trying to attract employees to come and work for you from out of state it’s almost impossible. They can’t afford housing. They can’t afford the transportation. The taxes are significantly higher than most other states — property tax, income tax, sales tax. Just name the tax,” Piazza says.

The climate is a huge draw

One of the first things transplants notice about Boise is the climate, says Tyrell. Residents can enjoy a white Christmas without the inconvenience of being snowed in, as well as warm summers and sunny skies. This is particularly important for Californians who are used to a variety of outdoor activity.

“For Californians it’s really hard to make the move across the country. They tend to look at neighboring states,” says Turner. “You look at places like Arizona and Colorado but half the year you can’t go outside because it’s too hot or you’re digging your car out of the snow. If you look at places like Oregon and Washington all you’re seeing are grey skies. Californians really struggle with that. Boise is the perfect balance. You have these incredible outdoor spaces with a bustling city nearby.”