Historically, living with a partner before marriage was viewed as taboo. But today, public perception of unmarried couples living together has changed dramatically, especially among young adults. According to a 2018 survey from the U.S. Census, 15% of adults between the ages of 25-34 lived with an unmarried partner, compared to just 0.2% of adults in 1968.

The U.S. Census survey also found that, while more young adults are living with their partners before marriage, fewer young couples are getting married at all. As of 2018, 30% of adults between the ages of 18-34 were married, whereas 40 years ago, in 1978, nearly 60% of adults in the same age group were married.

Choosing to move in with a significant other is a big decision, regardless of your age or your views on marriage. It also depends on your relationship and your individual and joint plans for the future. If you’re wondering how soon is too soon to move in with your partner, here is some data and statistics that could help you make a decision one way or the other.

Cohabitation statistics
Before you choose to move in with your partner, it can help to understand some general statistics on couples who live together before marriage. Here is some data on cohabitation:

In addition, the number of unmarried couples living together can vary significantly depending on factors like age, income and employment status. Below are some 2018 statistics from the U.S. Census for unmarried, opposite-sex couples based on key demographics:

Where couples are living

Data shows that unmarried couples are more likely to live in a rented apartment than a single-family home. According to a study from RealPage, young couples make up roughly 5% of the total renter households in the U.S., based on a study of 11 million individual apartment leases. While the study doesn’t reflect data on unmarried couples specifically, trends in the data found that couples in this demographic are largely unmarried.

The RealPage study also identified where large swaths of unmarried couples are renting their homes. Portland, Oregon had one of the most notable clusters, with nearly 10% of young couples renting an apartment together. Denver, San Diego, Austin, Tampa and Seattle also had large percentages of young couples living together in a rented dwelling.

But while many unmarried young couples opt for rentals, other studies show that more couples are buying homes together before marriage. A report from the National Association of Realtors (NAR) found that in 2021, 9% of home buyers were unmarried couples. Roughly 20% of unmarried couples who purchased a home with their partner were in the age bracket of 22-30 years old.

If you are thinking about buying a house with your partner before marriage, it’s a good idea to speak with a realtor and/or lender to understand your options for financing and ownership. For example, you will need to decide if one person will hold the title, or if you will have a joint title. You should also put the proper contractual protections in place in case you split up or one partner passes away.

Purchasing a home is a big responsibility, regardless of your relationship status. Before you move forward, it’s important to understand the costs involved, such as closing costs, private mortgage insurance (PMI) and homeowners insurance.

If you take out a mortgage to buy a home, your lender will probably require you and your partner to purchase home insurance. Home insurance protects the physical structure of your home, you  and your partner’s belongings, personal liability, medical payments and loss of use. The average cost of home insurance in the U.S. is $1,383 per year for $250,000 in dwelling coverage, but you should get quotes to find the best rate for your situation.

Views on living together before marriage

Ultimately, the decision to move in with a partner before marriage is personal. It might be the right choice for one couple, but not for another. In addition, everyone has their own unique views on living together before marriage. Over time, public perception of cohabitating has changed dramatically, and today, more people are accepting of this type of living situation.

According to Pew Research, 78% of young adults between the ages of 18-29 say it’s acceptable for an unmarried couple to live together, even if they don’t plan to get married. However, more than half of these people agree that couples should get married if they plan to stay together long-term. 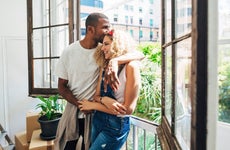 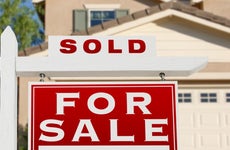 How long should you live in a house before selling? 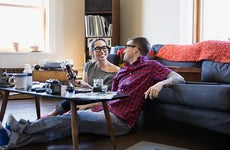 Buying a home together before marriage: What to consider 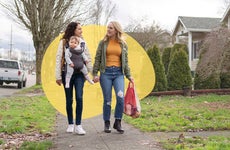