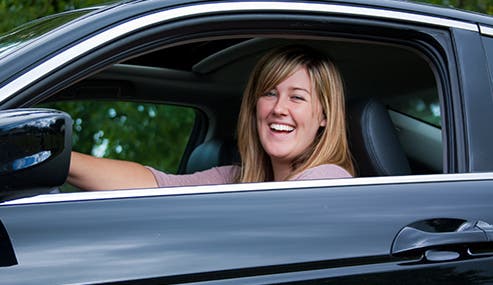 Teens and car insurance can be a costly combination for your wallet. Adding a teenager to your car insurance policy can cause your premiums to jump 50 percent or even double, according to the Insurance Information Institute, a New York-based trade group.

That’s because teen driver accidents are disproportionately high. Automobile crashes are the leading cause of death among Americans ages 15 to 19, according to the Centers for Disease Control and Prevention.

Insurers charge higher rates for teens than for any other group of drivers, but teen driver discounts and other measures can help cut the costs. Following are five ways to lower your family’s teen car insurance premiums.

Encourage your teen to study hard

Is your kid a star student? It’s common for car insurance companies to offer discounts when teens hit the books and earn top grades.

At Allstate, drivers younger than 25 can earn a good student discount of up to 20 percent. Allstate spokesman Justin Herndon says students qualify if they’re enrolled full time in high school or college, or are being schooled through an academic home-study program. He says the student must have achieved at least one of the following in the most recent quarter or semester:

The amount of the discount varies by state, Herndon says.

Requirements for a good-student discount are similar at American Family Insurance. As with Allstate, the amount you can save varies depending on the state in which you live.

“In Wisconsin, for example, teens can save anywhere from 5 (percent) to 20 percent,” says Sandra Spann, an American Family spokeswoman.

At Nationwide, the top car insurance discount for a good student is 15 percent, while those insured through Liberty Mutual can save up to 35 percent.

Enroll your teen in a safe-driving course

Accident rates for teens are sky-high, especially compared to drivers in other age groups. Many insurers now promote driver safety courses as a way to teach young, inexperienced drivers the rules of the road — and provide teen driver discounts.

For example, Liberty Mutual provides a coupon code for a safe-driving course called teenSMART. It allows a teen driver to experience driving simulations designed to improve skills behind the wheel.

Liberty Mutual says the teenSMART course has been shown to reduce collisions by up to 30 percent. Once your teen completes the program, you may be eligible for a discount that varies by state, says Glenn Greenberg, a Liberty Mutual spokesman.

Meanwhile, State Farm’s Steer Clear course for drivers younger than 25 can net families a discount of up to 15 percent off their premiums.

Big changes are in store when a teen driver turns 18 and graduates from high school. Some will enter the workforce and purchase their own auto insurance. But many more will head off to college or another type of schooling.

If you have teens attending a school far away from home — typically, at least 100 miles — many insurers offer a discount for temporarily removing them from your policy.

For example, American Family offers a TimeAway discount for students who live away at school and do not have a vehicle. “The school must be 100 miles away from where the vehicle is principally garaged,” Spann says.

“We do not recommend students away at school be excluded from the parents’ policy, as they likely return home at different times during the year and may operate the vehicle,” he says.

Students who reach a certain age — usually between 23 and 25 — are ineligible for the discount. So, check with your insurer.

Get the teen driver an older car to drive

Every freshly licensed teen wants a gleaming new car — maybe a Ferrari or Porsche. But it’s far more likely that a kid’s first set of wheels will be a gently used sedan.

Buying a broken-in car for a teen driver may save you a few bucks on insurance.

“In general, purchasing an older car may result in lower premiums than a newer car,” Spann says.

However, newer cars offer their own built-in insurance savings.

For example, newer cars have some safety features — such as anti-theft devices, air bags and anti-lock braking systems — that can lower premium costs. Older cars may not have all of these features.

Spann suggests talking to your agent to find out whether an older or newer car for your teen is more likely to result in the lowest premium.

Meanwhile, Toohey reminds parents that even if such safety features on a newer car result in higher premiums, paying more to insure a new car can be well worth it.

“The newer the car, the better protection it will provide in case of a crash,” he says.

Today’s technologies make it easier than ever to keep an eye on your teens when they take to the road. Several insurers offer electronic devices that allow you to monitor teen driving habits.

At Allstate, families can enroll in the Drivewise program, in which a small device is installed under a car’s dashboard.

“The device monitors how someone drives and creates a report card online that families can monitor,” Herndon says.

The information that’s gathered includes the number of miles the car covers, how fast it’s driven, the hours that the car is on the road and how often the brakes are applied hard.

Drivers who meet certain benchmarks can save up to 30 percent on premiums, Herndon says.

“So, this can be great for both safety and savings,” he says.

Drivewise is an optional feature, available to Allstate customers in at least 20 states.

Safeco Insurance’s Teen Safe Driver Discount offers car insurance savings of 15 percent to teens who agree to have their driving monitored with a similar electronic gadget. If the monitoring detects safe driving behavior, the teen driver discounts can remain in place until your kid turns 20.

More On Saving On Insurance: