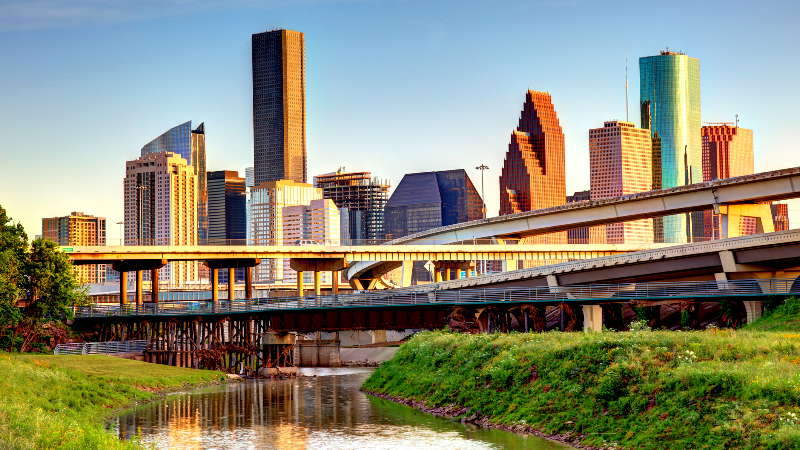 About 640 people a year die on Houston-area roads, according to a 2018 report by the Houston Chronicle, and 2,850 more are seriously injured. It’s important to have a good car insurance policy for that reason alone, and when you factor in the other statistics, like the fact that Houston ranks second for fatal crashes on federal highways out of the 12 largest regions of the country, it really drives home the point that you need to be covered by a solid policy.

You need to have good car insurance if you live in Houston, but how do you choose the right company to insure your car against fender benders and major accidents on I-10? There are a ton of different car insurance companies that offer coverage for Houston residents, after all, from the big guys like Progressive to the smaller, local companies, and it can be difficult to wade through all the options.

Luckily, we’re here for you with some information on the best Houston car insurance companies of 2020. Let’s take a look at what they are.

So now that we’ve established why the cost of insurance in Houston is so high, let’s take a look at car insurance companies that offer the best options for Houston drivers.

Texas Farm Bureau is often the cheapest, or one of the cheapest options for car insurance in Houston, and it’s also the best all around option, according to the 2019 rankings for car insurance satisfaction from J.D. Power. The company also rated 5 out of 5 for overall customer satisfaction. The estimate for the cost of car insurance for a 24-64 year old single driver with good credit in Harris county is $981. That’s significantly lower than the average.

The cost of insuring your vehicle with Texas Farm Bureau will vary based on a number of factors, including the amount of coverage and the type of vehicle you drive, but on average, this company comes out on top for price and customer satisfaction.

Allstate: Cheapest for drivers under age 25

If you’re looking for gap insurance to cover the “gap” between the cost of your car note and the value of your car, Allstate is one of the only companies to offer it in Texas.

State Farm: Most popular among Texans

State Farm insures a large percentage of Texans — 15% or so, which is the largest in the state — which should speak for itself as to Texans’ trust in the insurance company. State Farm also earned an A++ financial strength rating by A.M. Best and a 3 out of 5 rating on the J.D. Power customer satisfaction score.

But it’s not just State Farm’s high ratings that landed it on this list. It’s also the estimated cost of their premiums, which would run about $853 for car insurance for a 26-64 year old driver with good credit and no accidents, according to an estimate provided by HelpInsure. That’s much lower than the state average, making this car insurance provider is so popular in Texas.

When it comes to providing solid insurance policies for affordable prices, you can’t beat USAA. The military-focused company has a strong financial standing according to A.M. Best, and it ranked near the top of the insurance companies that serve Texas by Consumer Reports and J.D. Power.

According to HelpInsure, the average car insurance through USAA to cover a 26-64 year old driver with good credit and no accidents in Harris county is $496, which is about half of what it would cost you to insure your car through most of the other insurance companies on this list. There is a caveat, though: you have to be a member of the military or related to an active or retired member of the military to become a member of USAA and snag those awesome rates.

Given the good reputation Progressive has among its customers, it should be no surprise that they landed on this list of best car insurance companies in Houston. Between the A+ financial strength rating by A.M. Best and their low rates on car insurance — HelpInsure.com estimated that it would cost about $716 to insure a 26-64 year old female driver in Harris county with good credit and no accidents — Progressive is a solid choice for Houston drivers.

The cost of car insurance in Houston

No matter what ZIP code you live in, though, there’s one common theme: car insurance in the city of Houston will cost you. There are certain factors that are that make the cost of car insurance higher across Houston, including:

Given the already high cost of car insurance in Texas, it’s important to look for an affordable policy if you live in Houston or you could end up paying a pretty penny to insure your car.

There are a ton of car insurance discounts available in Houston, and if you do your research, you may find that you qualify for one (or more!) of them. Let’s take a look at the different discounts offered in Houston and how drivers may qualify for them.

This state law is often referred to as 30/60/25, and it’s higher than what’s required in most other states. In most states, the state minimum coverage is 25/50/20. It’s important to make sure any policy you consider purchasing will cover at least the minimum required by state law.

What is the cheapest car insurance in Houston?

Well, that depends on who you ask and what type of driver you are. There are tons of cheap car insurance options in the city of Houston, including several smaller Texas-based companies, so your best bet is to call around or shop quotes online to find the best policy to meet your needs. Start with the big guys, like State Farm, which is known for offering lower cost insurance in Texas, and go from there. Each company will offer different discounts and rates, so being a savvy shopper will ultimately lead you to the best car insurance deal.

What factors can affect the cost of my car insurance in Houston?

There are a ton of different factors that can raise or lower your car insurance rates if you live in the city of Houston. Everything from the make and model of your car to the type of coverage and your driving record can affect your rates, which is why it’s so important to get personalized car insurance quotes. Even your ZIP code can affect how much your car insurance policy will cost you, as can your marital status and what you use your car for.

What will happen if I drive uninsured in the city of Houston?

Well, quite a bit can happen if you drive in Houston — or in Texas in general — without an car insurance policy (or with a policy that doesn’t meet the minimum requirements for the state). If you are an uninsured driver in Houston, you may be looking at a ticket and a hefty fine, which can range from $350 for a first offense to $1,000 for subsequent offenses. If those hefty fines are not enough deterrent, you should also know that driving uninsured in Houston may cause you to have your driver’s license suspended. You could also end up having your car impounded for 180 days, so don’t risk it. It’s a whole lot cheaper (and safer) to drive insured than it is to deal with the repercussions of driving without coverage.