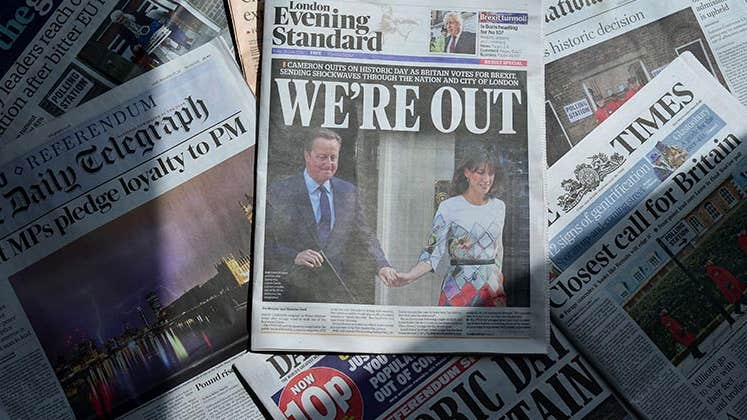 The impact of Brexit could strain job markets in the United Kingdom and the United States.

It’s difficult to talk about specifics immediately after the British vote to exit the European Union, but the general reaction among economists and others is that the U.K. jobs market will be under pressure as foreign companies assess the vote’s impact on their operations.

“(It will be) negative in every dimension, due primarily to the existential risk faced by the EU. Nobody knows what is going to happen, but it will almost certainly be bad for everyone involved,” says Omar Al-Ubaydli, affiliated senior research fellow at the Mercatus Center in Arlington, Virginia.

That’s because U.S. businesses exporting to the U.K. will be shipping products that are higher priced as the value of the dollar rises against the British pound sterling.

British subjects who work in the United States, and are paid in dollars, “are going to feel richer on their return trips home with the strengthening dollar,” Versace says.

If a U.K. recession occurs …

If the U.K. falls into recession, the jobs market could be far worse there. As is, U.K. unemployment sits at 5%, but the International Monetary Fund warned last week that the country could slide into recession if it leaves the EU.

London is Europe’s banking capital. Tom Cassidy, chief investment officer of Univest Wealth Management division, says large financial services companies, such as Goldman Sachs and JPMorgan Chase & Co. have large operations there. “JPMorgan did say at some point they could lose up to 1,000 to 4,000 jobs. But they really don’t know that, because no one knows what the terms of withdrawal will be,” Cassidy says.

By withdrawal, Cassidy means that banking and other companies that want to do business with the EU likely will have to relocate, unless or until the U.K. and separate EU countries strike trade agreements with one another.

EU will come under pressure from returning workers

Of greater concern in the European Union, countries could face returning workers from the U.K. looking for work and struggling to find it.

“You’ve got a tremendous amount of EU citizens that are living in the U.K. that I believe are going to have to move back to the continent,” says Matthew Carbray, a CFP professional and managing partner with Ridgeline Financial Partners LLC in Avon, Connecticut.

“You also have an issue with the portability from the U.K. into the EU region, and back and forth. It’s going to involve people not being able to set up shop and residency there as easily,” Carbray says.