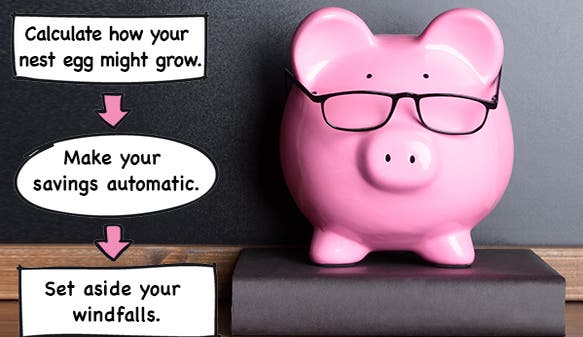 Today, let’s talk about the 1 percent. Not that 1 percent, but the difference that saving an extra 1 percent — starting today, wherever you are, and continuing for the rest of your working life — could have on your retirement.

A recent study from Fidelity Investments took a look at the difference that saving $50 more a month for 25 years — about 1 percent more for the typical, $50,000-a-year-earning household — would make in retirement. The answer: $270 in monthly retirement income.

Interestingly, that’s a much bigger return than people thought saving 1 percent more would make. Most people estimated the $50 would add up to about $17,000 over the time period. It was more than double that: $40,000.

All of that is well and good. But the more important question, particularly in light of studies that put the country’s retirement savings gap at anywhere from $4.13 trillion to $7.7 trillion, is how you can get yourself to save more.

Run the numbers. One of the interesting findings from Fidelity’s research was that just knowing it had lowballed its expectations of how much an extra 1 percent would add up to provided inspiration to save more. About 74 percent said they would be more likely to not just bank more cash, but to give up small expenditures today if it meant they’d have more in the future.

Then, just do it. Unfortunately, we talk a much better game than we walk when it comes to saving (like so many things in life). What tends to works best is an automatic approach.

In mid-March, I was among those invited to testify at a hearing of the Senate Special Committee on Aging. Another witness, Michal Grinstein-Weiss, the associate director at the Center for Social Development at Washington University in St. Louis, shared what happened when the state of Maine changed the process for enrolling in its Child Development Accounts (which provide a free $500 529 college savings account for every child born in Maine) from opt-in (a parent must proactively sign up) to opt-out (a parent gets an account as long as they don’t disclaim it). Enrollment jumped from 40 percent to 100 percent.

How many of those parents will continue to fund their accounts (they’re eligible for 50 percent matching grants of up to $100 annually) remains to be seen. But the quarterly statements they’ll receive will provide a not-so-subtle push.

Saving for retirement works the same way: Auto-enrollment into 401(k)s and automatic annual escalation of contributions have proven to boost both participation rates and total balances. If you don’t have a retirement plan at work, the key is to set up automatic contributions into an IRA or other retirement account of your own.

Use your windfalls. Or, as Grinstein-Weiss calls these, “golden moments.” Once again, the average tax refund is more than $3,000, according to the IRS. Grinstein-Weiss and her colleagues have partnered with TurboTax to insert messages into the popular tax software that encourage people to save at least some of their refunds and, in some cases, to shuttle tax filers into an opt-out scenario so that saving some of their refund is the default option. Not surprisingly, the latter had more impact.

But both worked: Many of the nearly 1 million tax filers reached via TurboTax in 2013 saved money they wouldn’t have otherwise. And tax refunds aren’t the only opportunities many people have these days.

“Employers are starting to give out raises and bonuses again,” says Fidelity Executive Vice President John Sweeney. “Without changing your lifestyle, you can put (some of that) away.”

Finally, it may help to know that if you can get yourself to do this, you may not miss the money. At all. How do I know this? Think back a couple of years to the elimination of the payroll tax holiday. Americans lost, essentially, 2 percent of their income, an average of $1,000 a year. Research from Bankrate.com shows nearly half didn’t even notice.