Jean Chatzky: How to avoid an energy scam 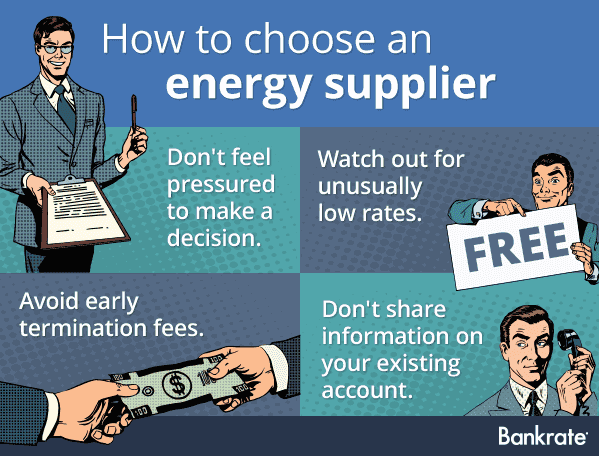 Winter is on its way and with it a host of energy and utility-related scams that can snare even the savviest consumers with the promise of lower electric and gas bills.

At last count, 28 states had some form of utility deregulation. That allows competing energy service companies, or ESCOs, to join the market and supply energy distributed by your utility company or from a green supplier. To compete, reliable ESCOs often charge less than your local utility. They can do so because they are not regulated and are able to buy energy on the open market, hopefully at lower prices than your utility can charge.

But the new marketplace has given rise to years of scams and hardball tactics, including pressure-filled sales calls from door-to-door salespeople, switching consumers to alternate energy companies without their consent and engaging in bait-and-switch initial low rates that sometimes double or triple a few months later.

Even if you live in a fully regulated state, you need to watch out for scammers. Some fraudsters pose as representatives from your utility threatening to turn off your power if you don’t immediately pay them for your “past due” bills. Others offer bogus “home energy audits” that are designed to sell you some energy saving device, maybe one you don’t really need.

Here’s how you can evaluate competing energy companies and avoid the most common rip-offs.

Don’t fall for the hard sell. Unscrupulous energy suppliers will make it seem as if you must switch from your utility. But deregulation does not mean you have to switch. You can easily stick with your utility, which directly supplies your energy. In other cases, some deceptive supplier salespeople will make it seem as if they are calling or coming to your door directly from your utility. But no utility company sends representatives to talk about rates.

Beware of deeply discounted rates. The bait and switch is one of the most common energy scam complaints that attorney generals  have been fighting against throughout the country. Unscrupulous ESCOs lure you in with rates that are much cheaper than your local utility, but then jump to much higher rates a few months later. In New York State, Attorney General Eric Schneiderman recently announced more than $1 million would be refunded to customers of HIKO energy in part because of the company’s false promises of low rates. And in Massachusetts, Attorney General Maura Healey earlier this year announced nearly $4 million would be refunded to Just Energy customers because of its deceptive marketing practices.

Always read the proposed contract carefully and beware of language such as “rates will change due to supplier’s discretion.” These vague statements can give ESCOs carte blanche to raise rates indiscriminately. Your state public utility commission likely has a tool that lets you compare rates and terms of state-vetted suppliers.

Protect your utility bill and account number. Some aggressive sales people will ask to see your utility bill or ask for your account number so they can show you how much you can potentially save or determine if you’re eligible for a better deal. Unfortunately, this is often a ruse to get your information and switch the account without your say so. Never share this information. And keep in mind that a true representative of your utility wouldn’t need to ask for your account information because the company would already have it.