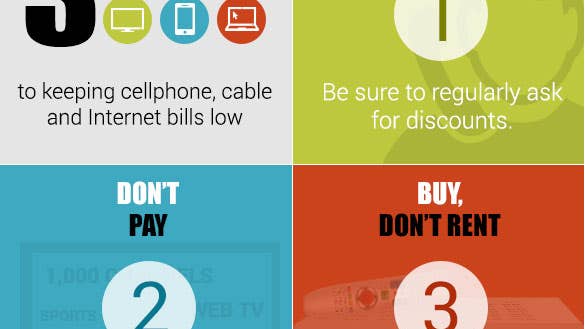 Editor’s note: Jean Chatzky, the financial editor for NBC’s “Today” show, is an award-winning personal finance journalist, AARP’s personal finance ambassador, and a contributing editor for Fortune magazine. Her eighth and most recent book is “Money Rules: The Simple Path to Lifelong Security.” Jean blogs at www.jeanchatzky.com and tweets @JeanChatzky. You can find her on LinkedIn and Facebook, too.

Are you suffering from “bill creep”? You know the phenomenon: You think you’ve snagged a great deal on cable or Internet or wireless — and you have. But over time, you add a few gigs of data here, an extra HD cable box there.

All of a sudden your bills are back in the stratosphere. It’s frustrating, not to mention unnecessary.

Logan Abbott is president of MyRatePlan.com and WireFly.com, which each help consumers figure out which plans are best for them. In the wireless world, for instance, he notes that the past 18 months have seen a ton of changes in the plan offerings from almost all the major carriers. The result: Cellphone plan consumers in the United States have more choice and power than they’ve ever had. And new competition for your cable business — not just from actual cable companies, but from streaming, too — puts you in the driver’s seat.

That said, it’s helpful to know which moves to make in order to consistently get the best deals. Here are a few suggestions.

In my house, every six months I’m on the phone with my cable company asking if there’s anything I can do to lower my bill. Ditto with my cellphone carrier.

If you’ve been with the company for a long time, Edgar Dworsky, founder of ConsumerWorld.org, suggests asking specifically for a loyalty discount. Sometimes the customer service representatives will reward you with a statement credit. Other times, there’s a specific discount to be had.

According to a 2014 Nielsen report, the average cable customer now receives 189 TV channels. But how many do they watch? Just 17.

If you’re not watching channels — particularly the pricey premium ones — cancel them. We also often overbuy minutes and data. Most people don’t need more than 3 GB, says Abbott, and others use far less. Monitor your usage and only buy what you need. If you don’t use the Internet often or you just don’t care, slowing down your Internet speed can reduce your costs.

You’re probably paying along the lines of $10 per month for each HD cable box in your home. Dworsky isn’t. He bought a smart media box, which has HD cable box capabilities. At a regular price of $129 — and a sale price of $79 — it pays for itself within a year. Some cable companies will charge a small fee ($1.50 to $2) for an HD card. The downside? You can’t get on-demand television viewing. But if this is a secondary set, or you don’t use it anyway, it’s a no-brainer.

Saving money on your bills doesn’t have to take much time. Have any other tips? Share them below, and we may use them in an upcoming story.