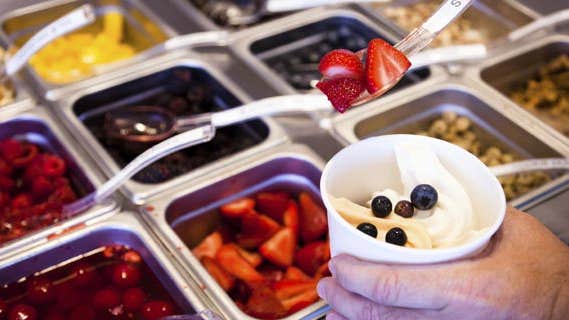 Frozen yogurt is overpriced, but not for the reason you might guess.

Self-serve shops — those places that let you pour and sprinkle your own ingredients — charge a huge markup for some of their toppings. This is because their pricing model is based on the weight: you pay the same per ounce, no matter what’s inside your cup. That means some toppings sell for pretty close what you’d pay at a grocery store and others have a huge markup.

Take banana slices: the average retail price for bananas in February was $0.59 per pound, according to the Bureau of Labor Statistics. That’s exactly how much a New York City 16 Handles location told me it charges per ounce.

In other words, 16 Handles is charging you as much for a 1-ounce wedge of fresh banana as you would pay for a pound of bananas at a grocery store. The “16” in its name might as well stand for a 16-fold markup!

With a few exceptions, like Pinkberry, most shops use this kind of pricing strategy. It makes sense: Imagine how difficult it would be to scan each cup and ring in each flavor and topping separately.

It’s not unlike the salad bar at Whole Foods. In fact, Refinery29 recently analyzed the value — nutritional and monetary — of the Whole Foods salad bar. Their story inspired this blog post and is worth checking out.

Now, I’m not suggesting you start reaching only for the most cost-efficient toppings next time you treat yourself to frozen yogurt. But I have to say that giving the 16 Handles toppings  the spreadsheet-and-calculator treatment produced a surprising result: Some of the healthier options, including fresh bananas, mangoes, pineapple and kiwi, were much more expensive at the yogurt shop than if you bought them at the grocery store. Chocolate covered pretzels, mini caramel turtles and peppermint bark were far more cost effective.

It creates a little dilemma the next time I get froyo: should I add the pricey fruit or the less-healthy, more cost-effective chocolate?

The candy and fruit at each location varies, but the 16 Handles list has most of what you would expect to find. I compared their 59 center per ounce price they charge per ounce to retail prices for the same ingredient. I used prices from, using Walmart most of the time because, with more than 4,500 stores in the U.S., its sells just about everywhere. For fruit prices, I referenced the U.S. Department of Agriculture and BLS.

Can’t argue with the numbers. It looks like I owe my chocoholic brother an apology.

I offered to take him out for frozen yogurt the weekend after he graduated college. In New Jersey it’s now difficult to find a strip mall without a froyo shop, but the invasion hadn’t yet spread to the part of North Carolina where he went to school. He didn’t know most frozen yogurt shops charge by weight.

My brother grabbed the biggest cup available, added a hearty serving of every variation of chocolate yogurt in the shop and nearly made a mess trying to balance chocolate toppings on top of it.

The bill: $9. That means, at $0.59 per ounce, he made himself a cup of frozen yogurt that weighed just shy of a pound. We still laugh about it.

I’ve always thought myself virtuous for putting a modest amount of tart frozen yogurt in my cup and piling on lots of fruit. But I didn’t realize I was paying such a staggering markup on the fruit.

What do you top your frozen yogurt with?