The world’s most expensive house is about to go on the market, and it’s not in Beverly Hills, Palm Beach or the Hamptons.

For a cool $1.1 billion, you can own Villa Les Cedres (the cedars) in the billionaires’ holiday town of Saint-Jean-Cap-Ferrat, near the city of Nice.

Whoever lays down the cash for this pricey real estate can wave to British composer Andrew Lloyd Webber and Paul Allen, co-founder of Microsoft, who are neighbors, as they drive by.

Angelina and Brad slept there

Les Cedres is owned by Suzane Marnier-Lapostolle, a member of the Grand Marnier dynasty, makers of cognacs and liquors. The villa has been owned by the family since 1924.

Angelina Jolie and Brad Pitt stayed in the home before the birth of their twins, according to the Daily Mirror newspaper.

It’s no wonder that the rich and famous have found their way to Saint-Jean-Cap-Ferrat. It is an exclusive commune of 2,000 people on the French Riviera near Monaco and the border with Italy. 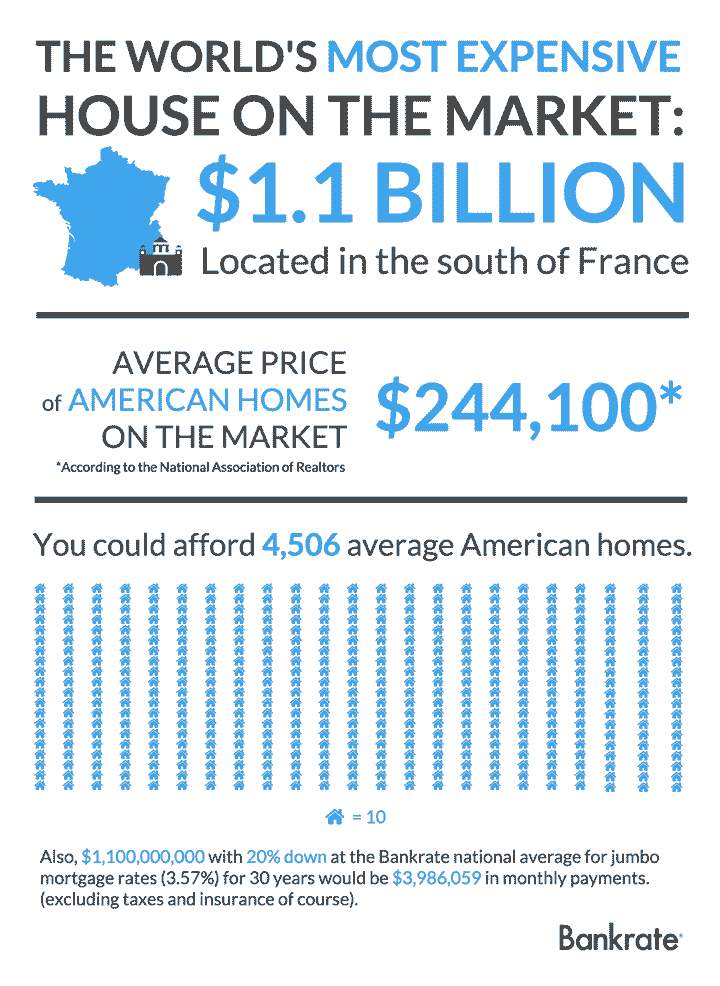 “We have not received instructions to sell. These kinds of properties tend to be marketed very discreetly,” says one real estate agent in nearby Monaco.

It was once the opulent home of Belgian King Leopold II. It has 10 bedrooms, an Olympic-sized swimming pool, a ballroom, stables for up to 30 horses and a lush garden with 35 acres of manicured lawns, 15,000 plants and 20 greenhouses.

By comparison, Hugh Hefner’s 22,000 square-foot, Gothic-Tudor Playboy mansion has 22 room, a wine cellar, a screening room, tennis and basketball courts, a waterfall and swimming pool. It sold in June for $100 million.

At the average price of an existing American home on the market, $244,100, you could buy 4,506 houses for the sale price of this one estate.

“Despite France’s problems, there should be a buyer around,” the agent told the Daily Mirror. “The billionaire market does not have much to do with countries — there will be international interest.”