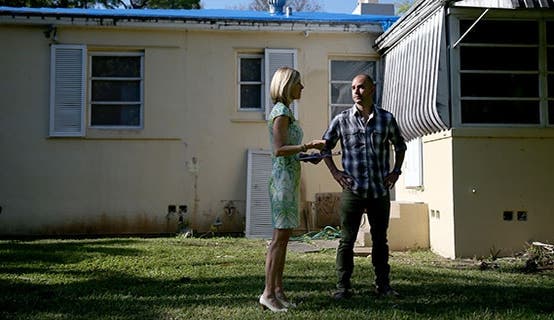 If you are one of an unfortunate but lucky few, the government is ready to reduce the amount you owe on your mortgage.

For years, the federal agency overseeing Fannie Mae and Freddie Mac has insisted that it would never forgive mortgage debt for people who were way behind on their house payments and who were underwater — that is, they owed far more than their homes were currently worth.

Now that agency — the Federal Housing Finance Agency — has changed its mind. It says a few borrowers can request to have some of their mortgage debt forgiven so they can get their mortgages modified and remain in their homes.

Moral hazard is what happens when I take a risk, knowing that if I lose, you’ll have to pay the cost. Hensarling is arguing that these borrowers bought their houses knowing that, if the housing market crashed and they lost their jobs, they could depend on the government to bail them out — so they took unnecessary risks, such as buying more house than they could afford.

Dan Berger, president and CEO of the National Association of Federal Credit Unions, makes a similar argument. “We fail to see how principal reduction will do anything to strengthen the housing market,” he says. “NAFCU has always supported protecting consumers, but we believe principal reduction sets a dangerous precedent.”

Goodman calls the moral hazard argument in this particular case a red herring, because the housing finance agency set eligibility for the program to people who were at least 90 days past due as of March 1. The policy was announced a month and a half later, which means that homeowners didn’t have a chance to game the system by deliberately withholding payments to become eligible.

Details of the plan

From the Federal Housing Finance Agency, here’s an explanation that could be written only by a Washington bureaucrat:

FHFA believes that this final crisis-era modification program will provide seriously delinquent borrowers a last opportunity to address negative equity and to avoid foreclosure and will also help to improve the stability of neighborhoods that have not yet recovered from the foreclosure crisis.

The housing finance agency estimates that 33,000 borrowers will be eligible for principal forgiveness. There are about 3,000 counties in the United States, so an average of about 10 homeowners per county are eligible.

Here are the eligibility criteria:


Loan servicers are required to identify which of their borrowers might be eligible, and notify them by Oct. 15. If you accept a “streamlined modification” before then, you may later convert from principal forbearance to principal forgiveness if you are eligible.

Why is this happening

The Federal Housing Finance Agency says it has done the math and has come up with a principal forgiveness program “that achieved a ‘win-win’ result — one that benefited both borrowers and” Fannie and Freddie. The main reason is that foreclosure is expensive, so, in some cases, it’s cheaper to forgive debt and let the homeowner keep paying a smaller mortgage every month, rather than foreclosing on the home.

Of the estimated 33,242 eligible borrowers, the agency says it will break even if 15% of the borrowers — that’s 4,993 homeowners — take the offer. Will that many borrowers accept? Only 9.5% of eligible borrowers accepted a similar deal that involved forbearance — not forgiveness — of mortgage debt, which cut borrowers’ payments but meant that they would still be stuck with paying off the entire loan amount whenever they sold the home.