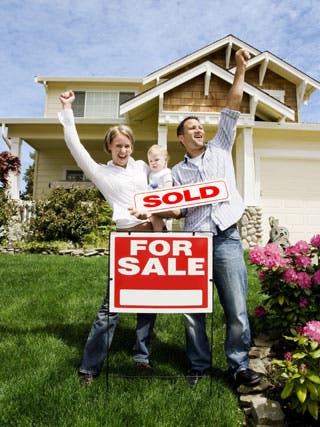 Sales of existing homes rose by 4.7% from August to September, according to data released Thursday from the National Association of Realtors. Sales were up from a downwardly revised 5.30 million in August to a seasonally adjusted annual rate of 5.55 million last month.

Existing-home sales include completed transactions for single-family homes, townhomes, condos and co-ops. The median price of existing homes for all types of housing was $221,900 in September — a 6.1% increase compared with September 2014.

“September home sales bounced back solidly after slowing in August and are now at their second highest pace since February 2007 (5.79 million),” Lawrence Yun, NAR’s chief economist, says in a statement. “While current price growth around 6 percent is still roughly double the pace of wages, affordability has slightly improved since the spring and is helping to keep demand at a strong and sustained pace.”

There was a 4.8-month supply of housing inventory at the end of September, which is down 2.6% from August and 3.1% from the same period last year.

The share of first-time homebuyers also fell last month, to 29%. They accounted for 32% of all buyers in August.

Price and sales gains in every region

The Northeast region saw the biggest increase in existing home sales — 8.6% from August to September — followed by the West at 6.7%. Sales were up 3.8% in the South and 2.3% in the Midwest. Median home prices increased year over year in each region by the following percentages:

RealtyTrac also released data Thursday, showing that the share of homes that were seriously underwater fell to 12.7% all properties with a mortgage during the third quarter of 2015. That’s down from 15% during the same period in 2014.

The share of equity-rich properties (those with 50% equity or more) is also down, falling from 20.1% of all mortgaged properties in Q3 2014 to 19.2% in Q3 2015. Check out RealtyTrac’s infographic for more report highlights.

Here are 5 trends in housing to look for over the next few months.

Getting ready to apply for a mortgage? Make sure your credit is mortgage-ready by getting your free credit score and report from myBankrate.