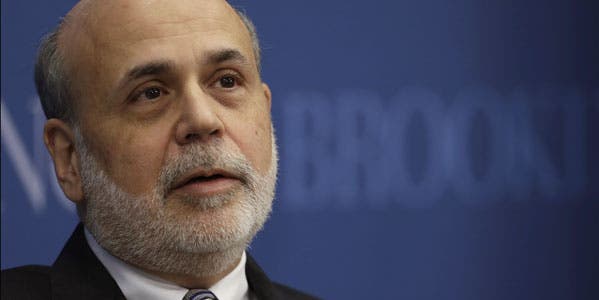 Years after the end of the financial crisis, getting a mortgage refinance still isn’t a slam dunk, even for a former head of the Fed. Former chairman of the Federal Reserve Ben Bernanke revealed at a recent conference that he and his wife had been denied for a refinance of their Washington, D.C., home.

According to a report by Bloomberg News, Bernanke “told moderator Mark Zandi of Moody’s Analytics Inc. — ‘just between the two of us’ — that ‘I recently tried to refinance my mortgage and I was unsuccessful in doing so.'”

Lest you think it was a joke, Bernanke went on:

When the audience laughed, Bernanke said, “I’m not making that up.”

“I think it’s entirely possible” that lenders “may have gone a little bit too far on mortgage credit conditions,” he said.

His inability to refinance this time around is strange for reasons even beyond the fact that Bernanke is a former Fed chairman. He would seem to touch all the bases you’d need for a stellar refinance.

There could be some hidden red flags with Bernanke we don’t know about. Changing jobs, as Bernanke did, can be a red flag for lenders, and we don’t have any way of knowing what the particulars of Bernanke’s debt-to-income ratio.

It’s also generally harder to get a high-dollar, or jumbo, loan. Bernanke’s house was last refinanced in 2011 for $672,000, according to Bloomberg. Meanwhile, Fannie Mae and Freddie Mac aren’t allowed to buy a loan originated in Washington, D.C., that exceeds $625,000. While the market for jumbo loans has eased somewhat, it still harder than it is to get a normal, or “conforming,” loan.

Even considering all that, absent some big ugly skeletons in Bernanke’s credit closet, his mortgage troubles would seem to illustrate the still-capricious nature of the U.S. mortgage market. While rates have remained low, it’s been hard for many homeowners to take advantage. Even those who used to head the most powerful central bank on the planet.