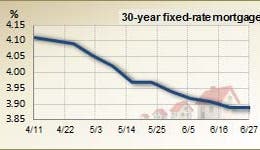 Mortgage rates remain at record lows as the housing market gains steam in many parts of the country.

The benchmark 30-year fixed-rate mortgage remained unchanged this week, at 3.89 percent, according to the Bankrate.com national survey of large lenders. The mortgages in this week’s survey had an average total of 0.44 discount and origination points. One year ago, the mortgage index stood at 4.79 percent; four weeks ago, it was 3.94 percent.

The 30-year fixed rate has not increased in the weekly survey for nearly three months.

Results of Bankrate.com’s June 27, 2012, weekly national survey of large lenders and the effect on monthly payments for a $165,000 loan:

Thank Europe and the Fed

The lingering euro crisis is the main driver of these record-low rates, says Michael Becker, a mortgage banker for WCS Funding in Baltimore. The uncertainty about the global market makes investors across the globe view U.S. Treasury bonds as a safe haven.

The higher demand for U.S. Treasury bonds pushes down the yield, or rate of return, on bonds. Mortgage rates often follow the same direction as bond yields

The Fed’s decision to extend its bond-buying program, known as Operation Twist, until the end of the year also helps borrowers.

How long will the low-rate party last?

“I think rates are going to stay near where they are now through the election,” says Derek Egeberg, a branch manager at Academy Mortgage in Yuma, Ariz. “But nobody really knows what’s going to happen. I’m still telling my clients to lock as fast as you can.”

If the housing market continues to improve and home prices begin to increase — which has started to happen in some parts of the country — there could be upward pressure on rates, he says.

“I’m seeing four or five offers on every home,” says Egeberg, who claims a large part of his business is coming from first-time homebuyers.

Create a news alert for
"mortgages"

Lennar Corp., one of the nation’s largest builders, says demand for new homes has increased significantly compared to last year. Lennar received orders for 4,481 new homes in the second quarter of this year, 40 percent more orders than the same period in 2011, according to a quarterly report issued Wednesday.

“Evidence from the field suggests that the ‘for sale’ housing market has, in fact, bottomed and that we have commenced a slow and steady recovery process,” says Lennar’s chief executive Stuart Miller. “Although highly conservative mortgage lending practices and challenging appraisals remain a constant headwind, we are experiencing net positive price and volume trends in most of our markets.”

While home prices have started to improve, they remain significantly lower than the levels reached during the housing boom. Many homeowners who bought homes at the height still have difficulties refinancing their mortgages at today’s record-low rates because they owe more than their homes are worth.

Government-sponsored programs, such as the Home Affordable Refinance Program and the Federal Housing Administration’s streamline refinance, are helping many of those borrowers but not all.

On June 11, the FHA significantly reduced fees for borrowers who have FHA loans and qualify to refinance their mortgages through the streamline program. By the following week, the volume of FHA refinance applications had nearly doubled, according to the Mortgage Bankers Association’s weekly survey.

This week’s survey shows a decline in the volume of applications as fewer borrowers applied for FHA refinances.

But like HARP 2.0, streamline refinances have disappointed some borrowers, as they learn large lenders are only offering the refinances on mortgages they already service, Becker says.

But that doesn’t mean you can’t find a lender willing to offer you a refinance, he says. It just means you have to look harder.