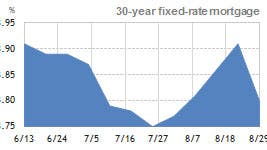 Mortgage rates tumbled this week as investors awaited moves by the world’s major central banks. The drop put rates near record lows again and ended a four-week streak of increases, giving borrowers some extra time to grab a low rate.

The benchmark 30-year fixed-rate mortgage fell to 3.8 percent from 3.91 percent, according to the Bankrate.com national survey of large lenders. The mortgages in this week’s survey had an average total of 0.4 discount and origination points. One year ago, the mortgage index stood at 4.37 percent; four weeks ago, it was 3.77 percent.

Helping rates this week was speculation that Federal Reserve Chairman Ben Bernanke may announce plans for additional monetary stimulus at an annual conference scheduled for Friday in Jackson Hole, Wyo.

The rumors started after the Federal Open Market Committee’s latest meeting minutes were released. In the minutes, some Fed members indicated they support additional stimulus, including additional bond purchases. Two years ago, the Fed announced its second bond-buying program, QE2, during this same annual summit.

Even if a supposed QE3 is not announced this week, Bernanke’s speech may still affect the direction of mortgage rates in coming days, says Michael Becker, a mortgage banker at WCS Funding in Baltimore.

“We are in a strange market these days where statements from central bank heads move markets more than economic data,” Becker says. “So it’s hard to tell where rates are going, but if you’re ready to lock, I’d say do it.”

Rumors aside, it’s unlikely Bernanke will announce additional help for the economy Friday, analysts say. That’s partly because recent reports show the U.S. economy and the housing market have been improving — slowly but surely. The improvements make it more challenging to persuade Fed members who are against additional stimulus that more help is needed.

What’s good for the economy isn’t good for rates

On Wednesday, the Commerce Department said economic growth in the second quarter of this year was better than expected. The country’s gross domestic product, or GDP, which measures economic activity, grew at an annual rate of 1.7 percent in the second quarter. The government had previously estimated growth at 1.5 percent.

“Retail activity, including auto sales, had increased since the last Beige Book report,” the Fed says in the report.

Recent improvements in the housing market also may be seen as a sign that the economy may be ready to walk on its own feet and it doesn’t need additional help from the Fed.

U.S. home prices posted a year-over-year increase in June for the first time in two years, according to the Standard & Poor’s/Case-Shiller home price index report released this week. The closely watched index of 20 major metro areas shows home prices rose by 0.5 percent in June, compared to a year ago. This isn’t isolated data. Several other recent reports that track home prices and home sales have shown consistent improvements in the housing sector.

“We seem to be witnessing exactly what we needed for a sustained recovery; monthly increases coupled with improving annual rates of change. The market may have finally turned around,” says David M. Blitzer, chairman of the index committee at S&P Dow Jones Indices.

Europe is your friend but not forever

But borrowers who want the superlow rates to last a little longer still have Europe’s trouble on their side. Analysts say that until the debt crisis in Europe is resolved, rates in the United States will likely stay near the lows. That’s because the crisis makes investors seek safer investments, such as U.S. Treasuries and mortgage bonds, and that generally results in lower mortgage rates.

Will the European debt crisis be solved anytime soon? Probably not, but since rumors move markets, rates may react to a European Central Bank meeting Sept. 6. Any announcements that make investors feel more confident about Europe’s economy may hurt rates in the United States, Becker says.

“There’s so much going on after Labor Day that anything could happen to rates,” Becker says.