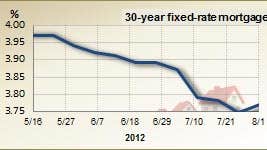 The rate on the most popular type of mortgage rose this week for the first time in nearly four months after Europe promised to fix its debt crisis.

The benchmark 30-year fixed-rate mortgage rose to 3.77 percent from 3.75 percent, according to the Bankrate.com national survey of large lenders. The mortgages in this week’s survey had an average total of 0.44 discount and origination points. One year ago, the mortgage index stood at 4.54 percent; four weeks ago, it was 3.87 percent.

Results of Bankrate.com’s Aug. 1, 2012, weekly national survey of large lenders and the effect on monthly payments for a $165,000 loan:

The modest climb in the 30-year fixed takes place as the European Central Bank prepares to meet Thursday in Frankfurt, Germany, to discuss steps to solve its ongoing debt crisis. Last week, ECB President Mario Draghi promised to do “whatever it takes” to save the euro.

Can the ECB keep its promise?

Mortgage analysts say once the European crisis is solved, mortgage rates in the United States would likely rise. But the time hasn’t come yet, they say.

“They are just kicking the can down the road,” says Michael Becker, a mortgage banker at WCS Funding in Baltimore. “The underlying problems are still there. We’ve seen this before.”

If the plans presented by European leaders disappoint investors, mortgage rates in the United States could fall back to their lows. That’s because when investors are nervous about the global economy, they seek safer investments such as U.S. Treasuries and mortgage bonds. The higher demand for bonds pushes yields down, which normally helps rates.

Another factor that could influence mortgage rates this week is the July employment report that is scheduled to be released Friday by the Labor Department. The sluggish job market has contributed to the low rates. A positive report could push rates up for a few days.

But the upward trend would be short-lived, says Bob Moulton, president of Americana Mortgage in Manhasset, N.Y.

“It’s a temporary fluctuation,” he says. “I don’t think it is going to last.”

The Fed continues to help rates

And if rates rise, remember the Fed stands ready to act.

The Fed will “maintain a highly accommodative stance for monetary policy,” to support economic recovery, says the Federal Open Market Committee in a statement released after the FOMC meeting this week.

The Fed says it will continue its bond-buying program through the end of the year and will keep reinvesting in mortgage-backed securities, which should help keep a lid on rates.

“With elections around the corner, I do not see any major moves occurring by year end,” says Brett Sinnott, director of secondary marketing at CMG Mortgage Group in San Ramon, Calif.

Does that mean borrowers can rely on low mortgage rates through the end of the year? Possibly, but mortgage professionals say borrowers shouldn’t take a chance.

“You will see a lot of volatility next week,” Becker says. “Hopefully, people have locked a rate, even if rates are a little higher; I think they should pull the trigger if it makes sense for them.”