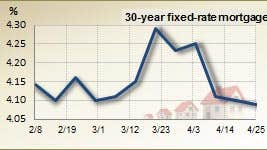 Mortgage rates fell for the third week in a row, and the rate on the most popular mortgage hit a record low, thanks to the Fed and the ongoing European debt crisis.

The benchmark 30-year fixed-rate mortgage fell to 4.09 percent, compared to 4.1 percent the previous week, according to the Bankrate.com national survey of large lenders. The mortgages in this week’s survey had an average total of 0.43 discount and origination points. One year ago, the mortgage index was 4.95 percent; four weeks ago, it was 4.23 percent.

“I’m kind of surprised that rates are as low as they are,” says Derek Egeberg, a branch manager at Academy Mortgage in Yuma, Ariz.

Results of Bankrate.com’s April 25, 2012, weekly national survey of large lenders and the effect on monthly payments for a $165,000 loan:

The 30-year fixed rate has not risen beyond 4.5 percent since August, according to Bankrate’s weekly survey.

Rates have stayed near the bottom for this long partly because of the Fed’s economic stimulus, including its decision to continue to reinvest in mortgage-backed securities.

“The Fed is primarily responsible for rates at current levels,” says John Walsh, president of Total Mortgage Services in Milford, Conn. “Rates will rise when it becomes clear that the Fed is done.”

The Fed doesn’t seem ready to let the mortgage market go on its own yet. The Fed says it will continue to reinvest in mortgage-backed securities, according to a statement released Wednesday after the Federal Open Market Committee meeting.

“There are still a lot of people out of work and a lot of foreclosures,” he says. “The government wants to keep the cost of money down. If rates were to go up, it would hurt the recovery.”

Also helping mortgage rates is the gloomy outlook for the debt crisis in Europe.

After eurozone leaders signed off on a second bailout package for Greece, investors seemed to have gained some confidence in the region. But recently, investors have received clear signs Europe’s debt woes are far from over.

Uncertainty in the political and economic arena in Europe has renewed the fear among investors. While that’s not good news for the U.S. economy, it helps mortgage rates.

That’s because nervous investors want a safe haven, and they find that safety in U.S. Treasury and mortgage-backed bonds. As the demand for these safe investments rises, the yield, or rate of return, falls, and mortgage rates tend to follow that direction. That’s not always the case, but it’s the general rule.

“The problems in Europe are our saving grace right now,” at least as it relates to mortgage rates, says Egeberg.