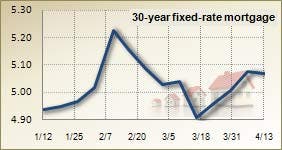 Signs of a still-fragile economy and concerns over the nuclear crisis in Japan led to a jittery stock market, leaving fixed-rate mortgages almost unchanged and pushing down on adjustables.

The benchmark 30-year fixed-rate mortgage fell 1 basis point this week to 5.07 percent, according to the Bankrate.com national survey of large lenders. A basis point is one-hundredth of 1 percentage point. The mortgages in this week’s survey had an average total of 0.4 discount and origination points. One year ago, the mortgage index was 5.21 percent; four weeks ago, it was 4.91 percent.

Steady rates are a reprieve for borrowers who had watched rates climb for three consecutive weeks, but it will be short-lived, say some mortgage experts.

Results of Bankrate.com’s April 13, 2011, weekly national survey of large lenders and the effect on monthly payments for a $165,000 loan:

Gardner expected fixed rates to decline this week, in part because of a decline in the stock market.

“When the stock market starts to dip, money will go into a safe haven of bonds and that will drive interest rates down,” she says.

It’s all about supply and demand, she says. Stocks and bonds compete for investors’ money. When stocks start to decline in value, investors get nervous and seek safer investments such as Treasury bonds.

As demand for Treasury bonds increases so does the price of those bonds, resulting in lower yields, or lower returns for investors. Mortgage interest rates normally follow Treasury yields. When yields fall, so do mortgage rates. Of course, like everything else in the complex world of mortgages, there are exceptions to the rule as there are times when yields fall and rates rise.

Analysts blame the dip in the stock market, in part, on Japan’s crisis.

On Tuesday, Japan’s nuclear safety agency upgraded the severity of the Fukushima Daiichi nuclear complex incident to 7, the highest level on the scale, putting it on par with the 1986 Chernobyl disaster. The nuclear threat, topped with earthquake aftershocks, injected more fear into the investment world this week.

The market also received clear signs that the economy is still frail, and there is only so much consumers can take when it comes to rising living costs and energy prices.

Amid the recent spikes in oil prices, demand for oil has decreased, pushing oil prices a bit lower. Crude oil declined about 6 percent in the last few days, reaching $106.44 per barrel Wednesday morning. That’s slightly good news for consumers but still high, considering oil was near $85 per barrel in mid-February.

To make investors even more nervous, on Monday, the International Monetary Fund lowered its projection for economic growth in the United States this year.

“I don’t expect much of a change anytime soon,” Moulton says.

“Yes, there is continued pressure on rates, but they have reached bottom,” Findlay says. “What’s happening in the debt market, the events in Japan and Libya have been helping drive rates lower … but today’s events will be short-lived, and we are going to continue to see progressively higher rates.”